Warning: The following contains spoilers for Sunday’s Season 3 premiere of Yellowstone. If you’ve yet to watch, you might want to giddy-up, up and away.

The status quo became the status “Whoa!” in Sunday’s Season 3 premiere of Yellowstone. Not only did a new threat cast its shadow over the Duttons, but a charming devil drew Beth’s ire (which I’m pretty sure amounts to foreplay), and John stepped down as livestock commissioner. Yet the biggest surprise in “You’re the Indian Now” wasn’t any of that but John’s decision to give his post to… On second thought, keep reading, we’ll get there. 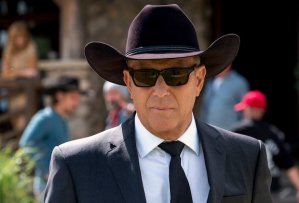 ‘ARE YOU ALL LOST?’ | As the episode began, John was called on the carpet by the governor, attorney general and feds over his abuse of his position to rescue Tate in Season 2’s finale. Though John technically — barely technically — hadn’t overreached, that wasn’t going to be how it played in the press. So he offered to resign, thereby allowing the politicians to keep his grandson out of it as they took a public victory lap over the militia that had been broken up and the human-smuggling ring that had been exposed. Did John know who he wanted to replace him? Lynelle asked. He’d have to get back to her on that. Shortly, as the news of John’s resignation broke, Mo suggested to Chief Rainwater that, having seen the rancher demonstrate “honor when most wouldn’t have… maybe he’s not the enemy we think he is.” Go on and pull the other one, the chief responded (basically). 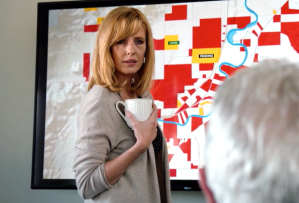 Back at the ranch, Kayce and Rip were making plans to roll out the chuck wagon for the herd when into the field wandered a bunch of suits from the Paradise Valley Sporting Club around the bend. The slimiest of them, Ellis Steele, explained that they’d, um, taken a wrong turn. (Yeah, right.) “I didn’t catch your name,” he told Kayce. “That’s ’cause I didn’t offer it,” Kayce replied. Despite the frosty reception Ellis had gotten — Rip even charged him with his horse! — he still invited his neighbors to dinner at the club. Meanwhile, Bob was filling in Beth on Ellis’ firm: Providence, Bob shared, was the property-management firm that one brought in when the goal was expansion well beyond casinos and golf courses. (Ruh-roh.) Later, picking up whisky, Beth bonded with the checkout girl, a beat-up mother of an ailing kid. Noticing Beth’s bruises, the girl asked, “Someone’s doing it to you, too?” Hell, no. “Not anymore, they’re not,” said Beth, recommending that the young woman get herself a new boyfriend — and a big-ass ashtray with which to bash in the head of the old one! 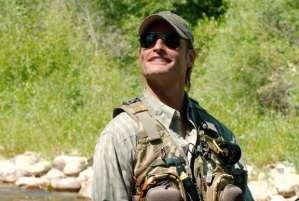 ‘YOUR’E THE MOST INTERESTING THING THAT’S HAPPENED TO ME TODAY’ | Driving home, Beth spotted newcomer Roarke Morris (Lost alum Josh Holloway) and busted him for trespassing. When he tried to flatter her, she retorted, “I hear Chippendales changed their policy on capped teeth.” Which didn’t faze him any since, in his estimation, it wasn’t an insult if he didn’t understand it. (Need I mention that — sorry, Rip — Holloway and Kelly Reilly had bonkers chemistry!) After explaining that his family owned a ranch five miles upstream, Roarke asked Beth to dinner and got a hard pass. “I dine on my joy for life,” she deadpanned. (Seriously, the scene included at least 25 of the 100 things I love most about Beth. You can rewatch it here and get Holloway’s take on how big a threat Roarke is to Rip’s romance here.) Back at the ranch, John explained to Kayce and Beth that he’d never wanted to be livestock commissioner, he’d just wanted the power — but he could still have that… by naming his favorite son as his replacement. No way, no how, said Kayce. So Beth floated the idea of giving the job to Jamie. No way, no how, said John. Ah, replied Beth. But why not? Jamie would use the office to pump up his popularity with his constituents — ranchers. And what’s good for ranchers is good for the Dutton Ranch. As always, Beth Dutton, smartest person in the room. 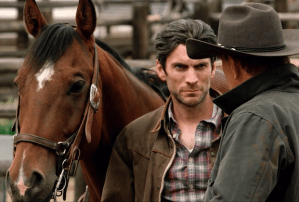 That night, while Jamie was made to roughhouse with the bunkhouse boys (and nearly got throttled in the process), John apologized to Monica for what had happened to Tate. “It’s not your fault,” she said. But she did have a favor to ask: When he took off to make camp near the cattle to keep an eye on the herd, would he take his grandson with him? The boy was suffering from nightmares and taking pills to sleep. But “I can’t think of a better medicine,” his mom said, “than stars for a ceiling.” The following day, John gave Jamie the good news that he was out of the bunkhouse (and the doghouse) and going to be livestock commissioner. However, “if you betray me again,” the patriarch added, “you’re dead to me, son.” Afterwards, when Kayce apologized for his disinterest in the position, saying, “It’s just not me,” Dad was crazy understanding. “I know exactly who you are,” said John, “and don’t you ever be sorry for it.” (Sometimes it’s hard not to feel for Jamie; he’s the Meg Griffin of this show!)

‘HOUSES ARE LIKE BOATS — THEY NEED TO BE CHRISTENED’ | As the episode drew to a close, Rainwater discovered that Ellis and Providence had gotten a cease-and-desist order to put a halt to the chief’s construction. Why, exactly? By and by, hinted the scumbag, “my client’s position will be perfectly clear.” (Cryptic and oily — he’s a freakin’ supervillain!) At Montana State Teachers’ College, Monica lectured her cell-phone-fixated students on how a small group of powerful men was “raping your world and selling you what they take.” When they looked unsure of which emoji would be the proper response, she huffed, “What a waste of my f–king time.” Class dissed as well as dismissed. That night, Beth showed up on Rip’s doorstep doing shots of whisky… one of which she poured across her chest as an invitation for him to join her in “christening” his new digs. And camping out with Tate, John confided that he, too, had nightmares, ones in which he stopped his truck to help some people on the side of the road, only it wasn’t his help that they were after. All the while, a wolf howled around them. Literally. Ellis wasn’t out there howling.

So, what did you think of the Season 3 premiere of Yellowstone? Do you think Beth would cheat on Rip with Roarke (or anyone)? Grade the episode in the poll below, then hit the comments.