Yellowstone’s John knew that his plan to rescue grandson Tate from the Beck brothers was crazier than a steer with mad-cow disease. In fact, “this is gonna be the end of us,” he told sons Kayce and Jamie. “But… ” Yeah, you knew there was gonna be a “but,” didn’t you? “But we’re gonna do it, anyway.” Who was done in along the way? And did they manage to retrieve Kayce and Monica’s little boy? Read on for all the gory — and I do mean gory — details! 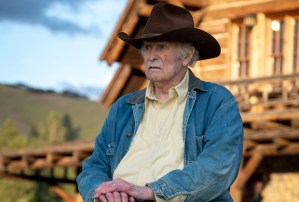 ‘ODDS ARE, I WAS NEVER WHO YOU THOUGHT I WAS, ANYWAY’ | Following a flashback to John taking his dying dad on a bittersweet last ride, the rancher told Rip in the present, “My whole life’s just a long series of losing things I love. I’m not gonna lose this one.” So he laid out his plan for Kayce and Jamie, leaving out Beth so that Tate would have someone to come home to. (“He’ll still have his mother — hello?!?” I could all but hear Monica yelling from off screen.) Meanwhile, Dan miraculously took out not one but two ninjas sent by the Becks to murder him. If only there hadn’t been a third. “I have a right to be here,” Dan muttered as he lay dying. “This is America.”

After the billionaire’s body was found, John challenged Sheriff Haskell to man up and take sides already. Choosing John’s, Haskell agreed to tell the Becks’ security — off-duty deputies who were also the sheriff’s cousins — to stand down, and advised the rancher to get a warrant and make what was going to transpire about cattle. As soon as John had said paperwork in hand, Kayce reassured Monica that he would get back their son. That was good, but she wanted more: “Promise me you’ll kill him,” she said, her halo slipping. “I’ma kill ’em both,” he replied. “I promise.” With that, the plan was underway. First, Haskell stopped Malcolm’s car to check his trunk — no Tate there. The villain was so pissed, he wished aloud that the sheriff had kids he could ’nap. (Shudder.) 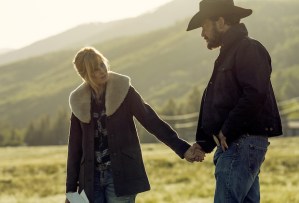 ‘IT’S ALWAYS THE INNOCENT WHO PAY MOST DEARLY FOR THE THINGS WE MEN DO’ | After Haskell reported to John that Tate wasn’t with Malcolm, the rancher phoned Rainwater to warn him to lay low. The chief was prepared for the Becks’, however. He even sent henchman Mo to help the Duttons. “On this,” he made plain, “I stand with you.” That taken care of, John gave the go-ahead for Kayce to enter the Becks’ place, where he… holy (literal) crap! Opened fire on Teal on the toilet! “There’s a lotta stuff I can shoot before you die,” Kayce noted. So pretty quickly, Malcolm’s brother revealed that Tate was being held at a white-supremacist camp. And though Kayce hated to deny the dying man’s wish not to croak on the john, “I promised my wife I’d kill you,” he noted. And “all a man has is his word.” Aaand that was the end of Teal.

Before setting off to get Tate, John presented Beth with an amendment to his trust. “I know who loves me, I know who’s loyal,” he told her. “I always have.” When Jamie asked her what it said, she replied, “None of your f—ing business.” Did you expect her to say anything but that, Jamie? Really? Anyway, Beth made a beeline for Rip to read him the amendment, in which John called him, in essence, a son and gave him a house on Yellowstone. As the tough guy got all misty-eyed, Beth looked around the place and cracked, “There’s no accounting for taste, but I guess it’s the thought that counts.” Of course, it was only moments later that John had Kayce ask Rip to draw fire for him! Welcome to the family, Rip… however briefly you may live! 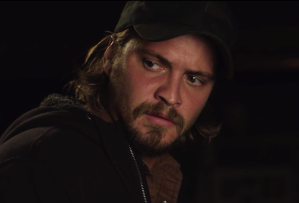 ‘YOU’RE NEVER FAR AWAY, ARE YOU?’ | As Team Get Tate Back snuck onto the compound disguised as livestock agents, the Duttons’ patriarch told Rip, “Of all the days to ask this of you, I’m sorry it’s today.” But Rip didn’t seem to mind risking his neck to protect Kayce. In fact, Rip replied, “I can’t think of a better day for it, sir.” I was sure poor Rip was toast, but he survived the ensuing gunfight. Less lucky was the nefarious Malcolm. After John shot the baddie, he advised him to go ahead and “scream till whatever makes you wanna hurt a child to hurt me leaves you.” For a few moments there, it appeared that John’s plan was to talk his nemesis to death. But then, his mind game worked, and Malcolm revealed that Tate was being held by another skinhead. “I wish we never met,” grumbled a dying Malcolm. “Yeah,” replied John, his mood improving by the second, “I bet you do.”

As “Sins of the Father” drew to a close, the sheriff and Kayce raided the white supremacist’s hovel and rescued a completely-traumatized Tate. Back at Yellowstone, John had no sooner broken the good news to Monica than Beth found Rip outside, as if watching over them. “We’re gonna lose this place, you know?” she told him. What’s more, “I can’t f—ing wait.” When they did, her plan was to sleep. “For a year,” she added. “Well, if you want some company, you let me know,” he said. And oh yes, she would. Finally, as Beth went back to the house, she saw her father break down in tears on the porch. So, what did you think of the Season 2 finale and its casualties? Grade the episode below, then hit the comments.