Talk about making a first impression that’ll last! In Sunday’s Season 3 premiere of Yellowstone, new cast member Josh Holloway’s Roarke Morris was only trying to catch some fish. Instead, he wound up getting hooked himself — by Beth. The more he came on to her, the more she went off on him — and he loved every second of it. (Click here to replay their introduction.) But was she as intrigued as she was enraged? Do fans of Beth and her sweetheart Rip have to worry that she might take the bait that’s being dangled by this interloper with the s—t-eating grin? Holloway has some thoughts about that.

TVLINE | C’mon, be honest. Should Beth and Rip fans be scared?
[Laughs] Well… a little bit. But then again, I think they’re mostly just gonna be shaking their heads at my character and going, “You don’t really know Rip, do ya?” [Laughs] I don’t know how scared Rip gets of anybody. What a great name for a guy that’s so mean! But I guess if Roarke really wanted Beth, he could probably take care of Rip on the side. He’s got that kinda power. 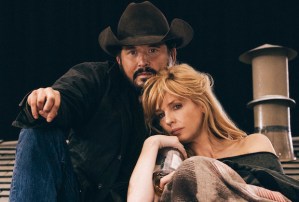 TVLINE | If Roarke knew about Rip, would he be scared?
No! He wouldn’t be intimidated, he’d just smile at Rip, because he deals with this kinda thing all the time [on a much bigger scale]. He’s probably dealt with Mossad assassins and such! And as the season goes on, you’ll find out that he’s not afraid to hire help, if you will. So no, I don’t think he’d be intimidated by Rip at all — which is probably not a wise thing!

TVLINE | I won’t ask what Roarke’s intentions are toward Beth, but what’s his reaction to her, would you say?
He’s so fascinated by her! And like he said in the episode, his family owns some land up there. He maybe grew up around there and had never met a girl like that, so sophisticated and yet with that sexy cowgirl thing. So he’s like, “Wow, what’s this?” He likes her mixture of badass and beautiful cowgirl. Then you meet [Kelly Reilly, who plays her], and she’s like this little sweet English girl, and you’re like, “Oh my God, really?!?” 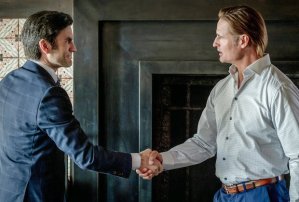 TVLINE | One of the Season 3 photos the network has released shows Roarke shaking hands with Beth’s brother, Jamie, the new livestock commissioner. What can you say about that?
Roarke is a deal maker. He knows what to look for. In this situation, he [sees Jamie and is] like, “Boom, there’s my weak link in the chain. That’s the link that will get me connected to the government.” So he recognizes Jamie’s position right away and [figures out] how to manipulate him. Beth, he’s trying to win over and be fair with. Jamie, he’s just doing his daily job. He’s going for it.

So, what did you think of Holloway’s Yellowstone debut? Were the sparks flying from Beth’s eyes pure loathing or more… love/hate? Hit the comments.