It’s been just over two years since the theatrical release of Love, Simon, the 2018 rom-com that broke new ground as the first major studio film to center on a gay teen romance. The movie is a charming and inoffensive coming-of-age flick — and your opinion of the film will likely dictate how much you enjoy Love, Victor, Hulu’s sequel series that features all the same heart, but too little innovation in its storytelling.

Love, Victor — now premiering Wednesday, June 17; I’ve seen all 10 episodes — stars Michael Cimino (Annabelle Comes Home) as the title character, a 15-year-old who is struggling with his sexuality as he adjusts to a new city and a nerve-wracking transition to Creekwood High School. You certainly don’t have to have seen Love, Simon in order to jump right in with the series; Love, Victor quickly catches viewers up on Simon Spier’s time at Creekwood, and Nick Robinson returns as Simon (via voiceover) when he and Victor strike up a friendship over Instagram DMs.

Though the show has 10 half-hour installments at its disposal — which seemed ripe for a more thorough, complex exploration of teenage sexuality than a two-hour movie could offer — Love, Victor only seems to scratch the surface of its storytelling possibilities, opting instead for narrative choices that feel a bit easy and predictable. As Victor tells Simon in the show’s trailer, “My story is confusing. Some guys like guys. Some guys like girls. Some guys like both. I’m not even sure what I like.” But rather than dive into the nuances of love and attraction — especially the topic of bisexuality, which is underrepresented and often mishandled in pop culture — Love, Victor often chooses to stay in the shallow end and cover much of the same ground as the film. 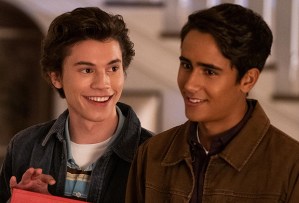 In fact, when the show does directly address the tangled web that sexuality can be, it all feels a bit Afterschool Special-y. “Sexuality is a spectrum!” Victor effuses in one of his chats with Simon, as though it’s the first time anyone has had that thought, while another character later refers to sexuality as “less of a straight line, and more like a Cirque du Soleil show.” But even as it alludes to the messy process of discovering one’s own sexuality, Love, Victor rarely executes any of the big swings that it seems to set up for itself. (That said, the show was originally ordered at Disney+ before it relocated to Hulu earlier this year, which could explain its fairly tame representation of thorny topics.)

Though it doesn’t take as many bold chances as I’d hoped it would, Love, Victor does still possess an undeniable charm. The follow-up is co-created by Elizabeth Berger and Isaac Aptaker, who wrote the Love, Simon screenplay — and they’ve certainly perfected the formula for a good, old-fashioned tug on the heartstrings. Given the tumultuous times in which we’re living, Love, Victor’s easy warmth is certainly comforting.

The series also boasts a delightful ensemble: Rachel Hilson (as Victor’s female love interest, Mia) and Anthony Turpel (as Victor’s eccentric neighbor, Felix) are standouts, and the show brings some well-paced character development to each of the Creekwood High students, transforming them from teen stereotypes into fascinating, fully realized human beings. In fact, it sometimes feels as though Victor isn’t in the spotlight enough, as some episodes largely sideline his self-discovery in favor of other storylines. But Victor’s group of friends is so enjoyable to watch — even popular jerk Andrew has interesting shades! — that it’s hard to mind when Victor’s journey takes a backseat.

For those who adored Love, Simon, its TV sequel will likely offer some cozy familiarity (along with a few fun Easter eggs), and telling LGBT-centric stories remains as crucial as ever. I only wish the show had been a bit more daring: If Simon Spier could ride that ferris wheel alone in front of the entire school, surely Victor could take some bigger risks, too.

THE TVLINE BOTTOM LINE: Love, Victor delivers the same amount of heart as the film that inspired it, but it misses an opportunity for bold storytelling and a more complex examination of sexuality.