The star of Batwoman will have a new face when Season 2 rolls around. But will Kate Kane herself? Is there any way — or any reason — for the Arrowverse series to write in the change of appearance?

Let me state up front, before we blow past the 280-character attention span, that I am NOT an advocate for writing it into a show when a role gets recast. Ignore it, I say, or make a wink-wink nod to it via some second banana’s throwaway line. (“You seem… different … today, Laramie.”) I spent a whole day last week compiling/researching dozens of past TV recasts, and it is rarely written into the story. 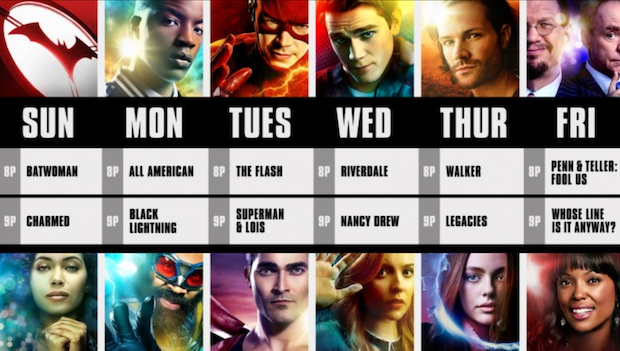 Also, the first couple of times I asked myself if Batwoman would/could/should account on-screen for the replacement of series lead Ruby Rose (already removed from The CW’s fall schedule graphic above, ouch) with whomever, what I came up with never held water. Mostly because no matter what disfiguring accident you throw at Kate in the Season 2 premiere, it would just seem odd that she gets a new face just as frenemy Tommy Elliot did.

But then… but then I kept coming back to something Batwoman showrunner Caroline Dries said in our post mortem Q&A, five days before the Ruby Rose news went wide.

I had asked Dries — as I did with her Flash counterpart, Eric Wallace — if the scripts for this past season that could not be filmed before the coronavirus shutdown would be left untouched over the long hiatus. And whereas Wallace just barely admitted there “might be a wee bit of tinkering” (if only to eliminate crowd scenes that would be problematic to film post-pandemic), Dries seemed more open to changes.

“When you are a writer and you have time on your hands, you start tinkering and tinkering,” she quickly answered. “The one thing writers don’t ever have is time, so when they get it, they think about making changes.”

Was she perhaps already looking ahead, to writing in the recast? I truly and absolutely do not know, and Dries upon reading this may very well dismiss any such theory on Twitter. But still, it nudged me to think a bit harder about how Batwoman could give Kate Kane a new face, without it seeming ridic.

So… what if… Season 2 opens with a street chase, shot wide at night and using a stand-in in the Batwoman costume. And the Scarlet Knight, like, skids her motorcycle into, I dunno, a farmer’s combine that happens to be motoring through the city. Kate just barely survives, but man, that face will need some work.

The problem we run into here is that, Arrowverse “shmience” or not, real-life plastic surgery requires time to heal. And while it’d be a shame to make Alice hurry up and wait with the Tommy Elliot/”Bruce Wayne” scheme she just revealed to us, perhaps this makes the return of Kate’s long-missing cousin a bit less random. Maybe Bruce shows up at Kate’s bedside, saying, “When I heard about how you nearly lost your life upholding my legacy, I couldn’t stay away any longer.” Because if he had a meaningful reason to end his absence from Gotham, Kate and Luke might be a little less leary of hijinks. It’d help sell Alice’s elaborate ruse.

Hey, maybe Alice and Tommy had even orchestrated Kate’s skid into that combine? To give “Bruce” a reason to return home?

(At this point with quarantine brain, I started thinking too, too much. What if Kate post-surgery pretends to leave town, now that her cousin Bruce is back in charge? And then when Commander Kane finally captures Batwoman and peels her cowl off, he doesn’t recognize that it’s his daughter?! Holy Bat-Irony! And then I took a Tylenol PM.)

Again, to be clear, I am 100-percent OK with Batwoman not addressing the recast on-screen! We are all grown-ups and such real-life matters can be ignored, just as when One Life to Live‘s previously recast Max Holden suddenly looked like Jimmy DePaiva again.

But what about you, the Bat-viewer? Would it be kosher with you if there is near-zero reference to a new actress playing Kate, when Batwoman opens Season 2 in the year 2021? Or are you one of those people who “needs” such things written into a show?