When committing to a superhero TV show, does the viewer make a pact to accept bad science as well as the inherently weird science?

It’s a question that comes up now and again, and one that I often raise via TVLine’s TV Questions column, or sometimes with a real-time tweet. And every time I do point out a show’s leap of logic — which is on average maybe once, twice per TV season? — for every person who joins me in picking the same nit, there are at least a couple who snap back, “It’s a superhero/fantasy show! Relax!”

But does buying into time travel, metahuman powers and cold-ray guns mean we also agree to look away when very real science is ignored?

Before we go any further, let me be clear: I get it. If I’m choosing to watch the adventures of a speedster or an alien superhero, I come fully prepared to accept any science that is undiscovered. Could a particle accelerator explosion cause a CSI to acquire superpowers? Who knows! Maybe? Could a tech genius invent a shrink ray? Sure, possibly! Could an archer’s bow double as a handheld winch that generates enough power and torque to zip him as well as a damsel in distress up, up and away to safety? Uh… probably not? But I know that Felicity, Curtis and Cisco are quite crafty.

What brings us here today, to visit this age-old topic? In the Nov. 13 episode of The Flash, Barry, bound to a chair, was pushed off the edge of a building rooftop by the meta dubbed Rag Doll. Iris promptly ran to where her husband had sat and leaped off the roof after him. Over the course of 12 seconds of free fall, Iris not only caught up to Barry but also gingerly slipped a key into his meta cuffs, freeing up his powers to save them both from a fatal impact. (It’s a good thing that Barry conveniently plummeted in a static position versus any kind of spiral.) 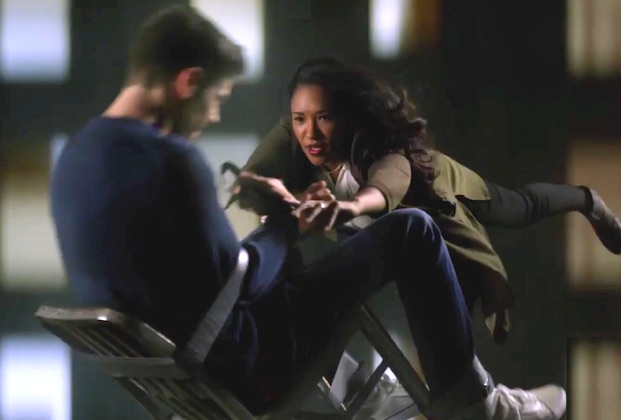 Jumping off the roof was a bold move for Iris, and a thrillingly heroic one. No one is arguing that. It did, however, dare to defy that which was drilled into our heads as high school students: “All objects will fall with the same rate of acceleration, regardless of their mass.”

Iris benefited from no additional propulsion, and to those who have argued that she used a skydiver technique à la Point Break to catch up to Barry, at least one tweeter has noted* that they would have had to fallen off of the world’s second-tallest building for that to happen over the course of 12 seconds. (*I didn’t check this person’s math, but it sounds fair.)

I am not picking on The Flash for failing known science, or even superhero shows for that matter. TVLine has similarly called out Black Mirror for suggesting that an “emergency contraceptive pill” could terminate a pregnancy. Timeless outfitted Rittenhouse agents in World War I with cell phones, yet no apparent means of charging them. The Last Ship sailed down the shallow Mississippi River. And yes, we previously chided The Flash for suggesting that a passenger elevator’s pulley system could vigorously shake a cab like a Yahtzee cup. Update: And according to many readers, Caitlin has not practiced the best medicine (despite having cruised through years of med school at a remarkably early age), while Barry often scribbles vector math gibberish on the whiteboard.

Never a site to simply pose questions in a vacuum, TVLine asked Flash showrunner Todd Helbing about the “Doll’d Up” episode’s great leap and similar flights of scientific fancy.

“We like to call it ‘schmience,'” he answered. “I mean, look, none of it makes sense, right? There are no laws of time travel that exist. I read an article that a physicist had written, about how if Barry zoops and catches somebody, then skids to a stop, their neck would break. So yeah, you just have to accept [things].”

The Flash EP then reminded, “In the pilot, there’s a reason why it starts out, ‘I need you to believe in something impossible.’ It’s like, ‘I need you accept that this could exist and go with it.’ That’s what that line was about.”

Where do you stand on giving superhero/sci-fi/fantasy shows free reign when it comes to fudged science? (With reporting by Vlada Gelman)