The following post contains major spoilers about the events of How to Get Away With Murder‘s series finale. We don’t advise reading any further until you’ve watched the episode.

There weren’t any bonfires, swanky law firm parties or snow-covered wedding receptions to ruin, but How to Get Away With Murder‘s series finale still found time for some tragedy.

The ABC drama wrapped its six-season run on Thursday night, bringing some long-awaited closure to the lives of Annalise Keating & Co. And though the episode made room for some victorious moments — namely Annalise’s acquittal on all charges at trial — there was also plenty of devastation, including Frank and Bonnie’s tragic, back-to-back deaths.

Here’s how the finale’s last act went down: After Annalise was found not guilty by the jury, she stood on the courthouse steps where she took questions from the press. At the same time, Frank — whose life had been upended by the news that he’s Sam and Hannah Keating’s son — arrived at the courthouse, where he gunned down Gov. Birkhead in broad daylight as she came out of the building. But someone in Birkhead’s entourage shot back at Frank after he opened fire, and both Frank and Bonnie were killed in the crossfire.

Meanwhile, we finally learned the truth behind Annalise’s long-teased funeral. The event actually took place decades in the future, after Annalise had died as an old woman. And Alfred Enoch — who played Wes Gibbins in Murder‘s first three seasons — was not returning as Wes at the funeral, but as an adult version of Wes and Laurel’s son, Christopher, who became a Middleton University professor himself. (For a full recap of what happened in the finale, click here.)

After screening the episode, TVLine spoke with series creator Pete Nowalk, who broke down the finale’s major developments — including the twist he’d been envisioning since last summer.

TVLINE | I want to go back to a conversation we had last fall, before this season started. You said the idea for how to end the show came to you like a vision. Can you say what specifically that idea was? Did it change at all throughout the year?
It had been planted in my head — I think by Viola [Davis] — that it would be a great mystery if Annalise was killed and we didn’t know who it was. And I agreed with her. I’d kind of always wondered, “Should Annalise’s murder be the final season?” But I also did not want to kill her. [Laughs] I felt like she was such a triumphant character who beat down her problems and fought and persevered. It was really important for me that she had a triumphant ending. So the vision that came to me was that Alfie could play Christopher, so I could have my cake and eat it, too.

TVLINE | You absolutely tricked me with his appearance in the fall finale, and I’m sure I wasn’t the only one. But that entire Christopher twist had already been decided when you started writing the season?
It wasn’t set in stone until [Enoch] said he would do it. [Laughs] And luckily, he was thrilled to do it. But yes, that was my pitch. That was a way to kill Annalise and also stay in the style of the show, which is flashing forward. This is the ultimate flash-forward.

TVLINE | It was suggested, for a big part of this season, that Annalise would ultimately fake her death and get a fresh start somewhere else. Was that ever something you seriously considered as a way to end her storyline?
Not at all. Because even if people in real life fake their own deaths, it seems fake when you try to do it on TV. [Laughs] So we definitely told that storyline because it was such an easy fake-out for the audience, but I never wanted [that]. I didn’t see how [we could do it], even in a show that has such heightened qualities like this one, and sometimes people might think they’re over the top. It just felt like that was one step too far.

TVLINE | And there were a lot of fan theories posed over the years that Wes’ death had actually been faked, too. Was that ever a legitimate possibility for you in the writers’ room?
No, and you know what? It would have been if we hadn’t seen him and shown his autopsy, which was such a horrible, graphic thing. I mean, work backwards from there — Annalise seeing him on the stretcher was one of our biggest twists, one of our most painful twists and most painful decisions to make. That would have had to be, like, the police put makeup on him. [Laughs] There was no way to make that work. But I loved that people were ready to believe it because it made our final twist [with an adult Christopher] easier to do. 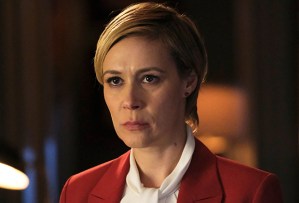 TVLINE | Speaking of deaths, are you able to confirm that Bonnie and Frank did both die in this finale?
[after a pause] Yes.

TVLINE | Tell me how that decision came about — not only to kill off two characters who were on the show from the start, but Bonnie and Frank in particular. Why did that feel like the right ending for them?
I felt like there had to be tragedy that resulted from all of the tragedy in the show. If everyone was going to walk away with their life, then it wasn’t at all going to feel like a good story or a true story. And then it really started with Frank. I understood that he would sacrifice himself for Annalise. Even 10 years ago, I think he would have sacrificed himself for Annalise, and that was really because of his guilt that he was responsible for the death of her child. I don’t think he could ever forgive himself for that, and if he had the opportunity to save Annalise or do right by her, he was going to do whatever he had to do, even if that meant going on a suicide mission.

Then, within that, we debated the Bonnie thing a lot in the writers’ room. [Laughs] And most people were really on the side of giving her a more triumphant ending, as something that allowed her some happiness. There’s really no character who has suffered more than her on the show and had such a bleak life. But I just felt like that wasn’t true, either. It’s not like everyone gets what they deserve in life, and I didn’t want that to also happen on the show. I wanted there to be some tragedy. And the only thing that made me feel OK about it was that her and Frank did really love each other, and it was like Romeo and Juliet for them to die together.

TVLINE | When I watched their death scenes, I was struck by the idea that perhaps Bonnie couldn’t have lived without Frank, given everything she’s gone through, and it made sense to me that they would have to die together. Did you feel that way at all? Did that contribute to the decision?
It really started with Frank, and then the debate was, “Well, what should Bonnie’s ending be?” completely separate from that. I think she would have been able to live without him, to be frank. No pun intended. [Laughs] I think Annalise would have taken her, and they would have been together wherever they went, because their bond was so unbreakable. They really understood each other in this deep, deep way that nobody else did. But that’s not what fate gave her. I don’t know what her life would have been. It’s sad to think that she maybe could have found some happiness. But all of the characters could have died in my book. [Laughs] Just given what they’ve done and all the havoc they’ve wreaked. But just two of them did.

TVLINE | In that same vein, Michaela had an interesting ending here. She has to pay some kind of price in the short term for what she’s done, considering all of her friends leave her after the trial. But in that flash-forward when she’s getting sworn in, it seems she still accomplished what she set out to do. Did you feel she deserved a happy ending, despite all of her actions?
I did want Michaela to get a happy ending. One of my favorite things in the finale is when we hear specific things that happened to her as she grew up, because we never got to see that on the show — and she never really talked about it, because that’s not something she chooses to dwell on. I thought she had suffered enough. When she says, “I’ve suffered enough,” I believed that. And she made some really hard choices to be a survivor. Every decision the characters make feels real and true to that character. Michaela is a survivor, and she can compartmentalize and reinvent herself. She makes hard choices and knows that she’s going to lose things, but she knows what she wants and she goes after it, and that’s what she got. 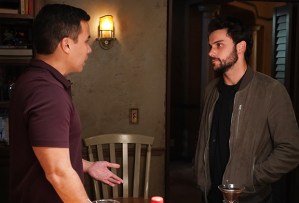 TVLINE | It was so nice to see Connor and Oliver come back to each other in the end, though it really seemed like their breakup was going to stick at first. Was it important to you that they stuck it out together?
Ever since I knew we were doing this giant leap forward [to Annalise’s funeral], I knew I wanted them to be there together. And the full story of what happens — between when Connor is dragged off to jail and then they’re together at the funeral — that’s really my love letter to “Coliver” fans, who are our most vocal and most passionate. Now, they get to write the story of what happened. I have my version, but I’m also happy for the fans to think about what they want for those two people in those 30 or 40 years.

TVLINE | I did notice there weren’t any interim scenes between the trial and the funeral. It sounds like that was intentional on your part.
Yeah, we really don’t see anyone, except for Annalise, after the courthouse steps. And that was purposeful. My favorite stories are when we get to fill in the blanks as the audience, and I get that people might be frustrated at that. [Laughs] But I’m also passing the baton to them.

TVLINE | When Connor told Oliver that he didn’t love him, do you think he was really being honest there? Or was he saying that to make the idea of divorce easier for Oliver?
[after a pause] I’m not gonna answer that one. I could answer, but it depends on the day. That’s how Connor would answer it, too. In that moment, it’s up in the air.

TVLINE | Was there anything you didn’t get to explore in this final season that you’d wanted to? Any storylines you didn’t have room for?
I’m gonna say no. [Laughs] So much of making a network TV show is really messy, and from the mess comes the greatest moments, because they’re instinctual. The finale ends up that way, too. Obviously, I had to cut some scenes, some lines, some storylines that I never got to write because I knew they wouldn’t fit in. But within that, I think we would have been trying to explain everything, and I actually don’t think that’s entertaining — to watch everything be explained, every little detail. There’s some questions I could probably answer, plot-wise, where I could say, “Yeah, this is what I think happened to Laurel’s mom specifically,” or, “This is who I think killed Jorge.” There’s definitely hints, just in case people are very worried about it. But in the mess comes the magic.