The following post contains major spoilers from How to Get Away With Murder‘s Season 6 fall finale. (Need to catch up? Read our previous episode recap here.)

How to Get Away With Murder‘s Keating Five may have lost another member on Thursday — but it also gained one back.

In the stunning final seconds of Murder‘s fall finale, we returned to a flash forward of Annalise’s funeral that we’d previously seen in the season premiere. But this one was a bit longer: After the officiant concluded her prayer, guests were invited to say a few words about Annalise… and just as “a special speaker who has known Annalise for a long time” was called to the front, none other than Wes Gibbins made his way through the crowd.

Yes, that Wes Gibbins. Student of Annalise. Father of baby Christopher. And, apparently, not the casualty of a house fire that took place way back in Season 3, despite the big reveal of Wes’ burned corpse at the time. (In fact, Wes looked spectacularly un-charred when he appeared at Annalise’s funeral, though we didn’t get a great look at the side of his face that had allegedly been set ablaze.) 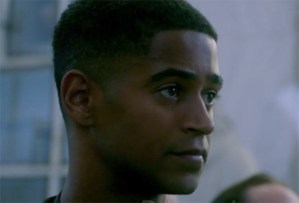 According to showrunner Pete Nowalk, it hasn’t necessarily been the plan for Wes to return ever since he was killed off. Rather, “this idea came about during our break between Season 5 and 6,” as Nowalk was plotting Murder‘s final batch of episodes.

And though he remains tight-lipped about the specifics of Wes’ comeback, Nowalk can confirm that Alfred Enoch’s character “definitely factors into our series ending in a big way.”

Meanwhile, Wes wasn’t the only student of Annalise’s who made a surprising return in Thursday’s episode. Laurel, who has been MIA since Season 6 began, briefly FaceTimed Michaela to reveal that (a) she was safe, as was baby Christopher, (b) Tegan Price was the one who facilitated her disappearance and (c) she was not working with the FBI in their ongoing investigation of Annalise. (Rather, the informant was revealed to be Asher, who was later killed off; read our post mortem interview with Matt McGorry here.)

In the wake of Laurel’s news that she and Tegan were working together, Nowalk promises answers about Tegan’s involvement when the show returns next year.

“You’ll find out why Tegan helped Laurel, and also why Tegan kept it a secret for so long, especially from Annalise,” Nowalk shares, hinting that “it’s also going to be fun to see how Frank reacts when he hears this.”

How to Get Away With Murder‘s final season resumes on Thursday, April 2.

Did that Wes reveal shock you, Murder fans? Grade the fall finale in our poll below, then hit the comments with your reactions to his return.