First, the good (but terrible) news: We finally know who’s under the sheet on How to Get Away With Murder.

The bad news? The demise of this series-regular character raises more ugly questions than Annalise Keating pillorying a first-time ADA in open court.

If you missed Season 3, Episode 9 — the aptly titled “Who’s Dead?” — click here for a recap and post-mortem with executive producer Pete Nowalk. But those of you who’ve already witnessed the badly burnt body of Wes Gibbins may need some immediate comfort via a chat with his portrayer, Alfred Enoch.

Below, check out our Q&A with Enoch about Wes’ true intentions in that interrogation room, the tragedy of his brief and tortured life, and the ways we might still get to see him between now and next spring.

TVLINE | Let me start with a really stupid question. Is there any hope whatsoever for Wes? Any chance he’s still alive via trickery or tomfoolery or collusion?
I mean, I can never say anything definitively on our show because whenever I think I have a handle on what’s going on, I turn out to be wrong. But Wes looks pretty dead to me. And I felt pretty dead when I was lying on that autopsy table. [Laughs] 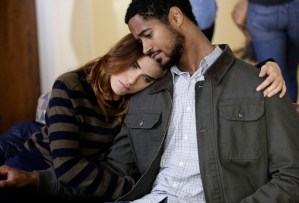 TVLINE | Assuming Wes is dead, his story is one of such tragedy: He was conceived when his mother was raped by her employer. He watched his mother die after she slit her own throat. He saw his biological father take a bullet to the head just as they were meeting for the first time. His girlfriend was murdered. He murdered Sam. And now he dies before he even graduates law school. As an actor, what’s your feeling seeing Wes get murdered without every really finding happiness?
Yeah. I mean, he never caught a break, did he? I think he did find happiness in a way, but that’s reality, you’re never really out of the woods, are you? In life, and certainly not on this show. He’d put himself on track a bit this season. He was with Laurel, and that was so good for him. He was edging closer to that happy ending he was chasing. But he just gets brought down by something from his past — it’s very bleak that it ends that way. [Laughs]

At first, my reaction was that I was bummed for myself. But the more I thought about it, I was like, “Wes! F—-n’ Wes, man! The poor guy! This is too much!” That’s what started to get me down. Tragedy upon tragedy. When you list it all like you just did, it’s like, “What the hell? Come on!”

TVLINE | HTGAWM creator Pete Nowalk told me he was still grappling with the question of “who’s under the sheet?” going into the planning stages of Episode 7. Tell me how you found out.
I got a message from his assistant asking, “Can you come see Pete?” It felt like I was going to the principal’s office. The cat’s out of the bag! [Laughs]

TVLINE | Episode 7 was where we finally saw Wes on “Fire Night,” though, in the interrogation room, and we were led to believe he’d survived.
I knew the truth by [the time I shot those scenes]. What made me feel like Wes was in the clear, actually, was a conversation with Aja [Namoi King]. She said, “The fact that Annalise gets Oliver to clean the phone [on Fire Night] implies that she’s able to shelve her feelings about it and get down to business. And Aja said, “She wouldn’t have been able to do that if it were Wes.” That kind of made sense to me. But then a couple days prior, I got this strange feeling: “I think it is Wes.” After all the writers have put Wes through, it’s gotta be him! [Laughs]

TVLINE | Was Wes actually going to testify against Annalise, or was he just buying time and/or playing those detectives?
I feel very certain about it. When I saw [Wes was possibly cooperating with detectives], I was like, “Pete, I have a question for you.” The kind of work Wes has done over the seasons to make his relationship with Annalise work — even in this weird state of affairs — he’s come to accept that she’s one of the most important people in his life. As much as she’s done some very questionable things as far as his interests are concerned, and as much as she’s kept things from him, they’ve been bound together. And she’s also shown him fantastic mercy.

TVLINE | Pete Nowalk told me you’re in the remainder of Season 3, albeit in flashbacks. Are there more surprises in store when it comes to Wes Gibbins?
For sure, there will be surprises because there’s a big mystery hanging over him: What happened between the police station and him ending up dead?

TVLINE | Let’s talk about that last image of Wes on the Medical Examiner’s table: Was that CGI or did you have to actually have that horrible burn makeup applied to you?
Ohhhhhh… four hours of makeup! Oh yeah! I’d get on set and people would say, “It’s upsetting to see you like that!” And I’d be like, “Maybe it’s more upsetting to have it put on!” [Laughs] Then when you wrap, everyone gets to go home and you have another hour and a half to remove it! That was upsetting, too! But it was all worth it. It looked pretty great. You’ve got to go out with a bang.

What did you think of the HTGAWM fall finale? Can you imagine the show without Wes? Take our poll below, then hit the comments to expand on your opinion!