The following post contains major spoilers from How to Get Away With Murder‘s Season 6 fall finale. Proceed with caution. (Need to catch up? Read our previous episode recap here.)

You can’t say we didn’t warn you, How to Get Away With Murder fans.

Ahead of the ABC drama’s final season, co-star Amirah Vann (aka Tegan Price) had cautioned that “people you love are gonna die. Not extras, not day players, but people you’ve been taking [this] journey with.”

And during Thursday’s fall finale, one of those unlucky victims was revealed: Matt McGorry‘s Asher Millstone.

“Asher is really dead,” McGorry confirms to TVLine. “He’s really, actually dead.” (And given the stunning return of long-presumed-dead Wes Gibbins (!!) in Thursday’s episode — more on that here — McGorry’s confirmation of his character’s fate seems like a necessary formality.)

Here’s what we know about Asher’s demise so far: In the fall finale, the FBI’s investigation into Annalise suddenly picked up speed, thanks to certain details that an anonymous informant — the one who’s been mentioned in this season’s flash forwards — had given to the bureau. Despite Asher’s best efforts to cast suspicion on other people, Michaela sussed out that Asher was the informant, and he ultimately confessed.

Asher revealed that he had cut a deal with the FBI in order to help his family. Remember that awkward Millstone dinner where Asher told his mom she was going to hell? Well, that gathering was a trap: After storming away from the dinner table, Asher was confronted by two FBI agents who urged him to help with their investigation. In return, Asher could protect his mother, who apparently faces legal trouble for knowing that Asher’s father was embezzling during his time as a judge. 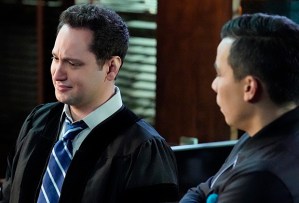 After Asher admitted to being the informant, Oliver (who was high on ‘shrooms at the time!) clocked him in the head with a fireplace poker — but that didn’t cause Asher’s death. Despite a wound on his cranium, he came to rather quickly, then fled from his classmates’ house and paid a visit to Bonnie, which we’d seen in a previous flash forward.

From there, it’s a bit unclear what happened to the poor kid; the next time we saw him after his trip to Bonnie’s house, Asher was lying in the hallway of his own apartment building, bleeding out — but it remains to be seen how Asher got back to his place, as well as who killed him. (Michaela and Connor, meanwhile, got arrested for Asher’s murder just moments before heading to Middleton’s graduation, despite denying any involvement.)

Though McGorry admits it was “a very emotional moment” to film his character’s demise, “it felt right” to the actor that Asher would be the FBI informant — and that he would meet an untimely end.

“Given who he is and his character and the situation that he was in, it made sense to me. It allowed me to really go out with a bang,” he shares, adding that he will still appear in Season 6 as part of “the continuing flashbacks that will undoubtedly happen” as Asher’s death is explained.

Showrunner Pete Nowalk echoed McGorry’s sentiment that Asher’s demise “felt like the full-circle journey” for a character who was often the black sheep of the Keating Five.

“He started on the outside of the group — loyal to his family, first and foremost — and that’s how he ultimately died,” Nowalk says. “Asher’s a family man at heart, it’s one of the best qualities about him. And we all definitely felt like he’d choose his blood family over Annalise. Of course, we’ll get more insight into his decision when we return.”

McGorry acknowledged his exit in a heartfelt Instagram post on Friday, in which he elaborated on the “surreal moment” of saying goodbye to Asher:

**MAJOR SPOILER ALERT** # # # # # # # **MAJOR SPOILER ALERT**- So if you watched this last episode of #HTAGWM , then you are aware that Asher…is dead…and also the mole. And yes, he really is dead. 😢😢😢 I know that people may have a whole host of different reactions to this, and that it may be a lot to process. It's been an incredible six seasons on the show, and I'm happy to say that you'll see more of Asher in plenty of flashbacks when we are back from the mid-season hiatus. I am grateful for the opportunity to have been, (and continue to be!) a part of this show and the progressive representations and politics that it has been pushing forward. I will definitely miss Asher being alive. He has always had a joy and lightness that has a beautiful quality, and to embody that light being extinguished as he faded into death…it definitely felt like a surreal moment. I'm grateful for the writers, for giving me lots of juicy storylines to tell this story the right way, and of course to all of the dedicated fans who have been supporting this show since the beginning. Your love means the world. And it is reciprocated. You can all come and sleepover at my house tonight and we can cuddle as you move through the grieving process. But I once I fall asleep, please don't touch me. It disturbs my sleep and sleep is very important to me. Love you all very much, and this is certainly not goodbye! ❤️🥰❤️🥰

How to Get Away With Murder will be back for its final stretch on Thursday, April 2.

Be honest, Murder fans: Did you see Asher’s death (or his role as the informant) coming? Grade the fall finale in our poll below, then drop a comment with your reactions to his demise.