Before How to Get Away With Murder’s final season got underway, I made a prediction that Tegan, Nate and Bonnie would all meet their makers — in that order! — before the series finale aired. And based on the events of Thursday’s episode, those deaths suddenly seem more plausible than ever.

The aforementioned trio took center stage in Episode 8, as they finally brought Nate Sr.’s death to trial. But before the hour was through, one of them wound up in the hospital and learned a life-changing truth — and it’s unclear which incident caused more pain. Read on for the details of “I Want to Be Free”:

TRIAL AND ERROR | The matter of Nate Sr.’s death finally reaches a courtroom in this episode, but the trial itself has more twists than a pack of Twizzlers — and that’s mostly Annalise’s doing. As you’ll recall, Annalise and Frank are loath to let the trial proceed without intervening, because Bonnie and Nate could potentially learn that Miller was an innocent man. Thus, as the episode continues, Annalise does everything in her power to bring the trial to an end, all while pretending to be on Bonnie and Nate’s side.

First, Bonnie gets booted as Nate’s lawyer because her conflict of interest in this case is just too severe. The judge already knew about Bonnie and Miller’s romantic relationship, but thanks to Frank’s behind-the-scenes dirty work, he also becomes aware of Bonnie’s friendship with Miller’s mother, and that’s enough to get Bonnie dismissed from the case. Tegan, however, quickly jumps in as her replacement; considering Cora is currently on assignment in the Middle East, Tegan is no longer worried that she’ll get offed by the Castillos. (Not that the Castillos were ever tailing Cora in the first place, but Tegan doesn’t need to know that.)

Next, Bonnie and Tegan agree to put Gov. Birkhead on the stand, but her testimony isn’t quite the smoking gun they’d hoped it would be. That’s when Annalise suggests going after Miller instead of the governor. After all, Bonnie was already told by Paula Gladden — one of the guards responsible for Nate Sr.’s transfer on the night he died — that Miller put out the hit on Nate Sr. Why not put Bonnie on the stand and spin the narrative against Miller instead of the governor for now? (Of course, we already know that Miller did not order Nate Sr.’s death. Rather, at the end of last season, Frank scared Paula into telling Bonnie that it was Miller’s doing, in order to keep Bonnie from knowing that her beau was innocent.) 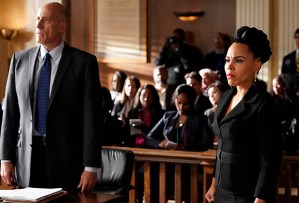 During her testimony, Bonnie urges the attorney general’s office to give Paula Gladden immunity; if she gets it, she can go on the stand herself and testify that Miller ordered the hit on Nate Sr. Frank is even willing to track down Paula again and re-spook her into continuing the lie that Miller facilitated Nate Sr.’s death.

But an enormous wrench is thrown into this plan when Bonnie gets into a car accident: While driving home from court one night, Bonnie reaches a red light, and the mysterious Castillo associate who’s been following Annalise all week — the fake Airbnb guest from last week — pulls up next to Bonnie’s car and remotely cuts her brakes. Bonnie doesn’t notice any of this because she’s on the phone with Annalise, but at the next light, she’s unable to stop. We don’t actually see the collision, but we do catch up with Bonnie in the hospital, where she’s now suffering from a hematoma in her head. She will likely be OK, but she’s pretty banged up, and Annalise and Frank are totally rattled by her near-death experience.

Finding herself at a crossroads, Annalise tries to convince Frank that the only way out is via the truth. They need to persuade Paula Gladden to be honest when she takes the stand the next day and reveal that it was actually Xavier Castillo — not Miller — who ordered the hit on Nate Sr. Frank tries to nix that idea, convinced that Bonnie will attempt suicide again if she learns that Miller was innocent. But Annalise believes Bonnie can handle it, and it’s the only way to stop the Castillos from hurting everyone in their circle. Reluctantly, Frank agrees, and he later convinces Paula to tell the truth during her testimony.

Paula, to her credit, holds up her end of the deal. While on the stand at the next day’s trial proceedings, she admits that Xavier Castillo bullied her and her fellow guard into killing Nate Sr., and she seems deeply remorseful about the whole thing. (Nate, meanwhile, is learning of Miller’s innocence in real time as Paula shares her story, and he looks sick to his stomach at the news.)

Following Paula’s testimony, the attorney general’s office offers Nate a settlement of $10 million — a generous sum by any standard. But Nate insists he doesn’t care about the dough; he wants justice for his father, and he tells Tegan that “this doesn’t end until we bury Birkhead.” Mind you, Tegan has just informed Nate that going up against the governor likely won’t end well, and not just because she can have the Castillos kill people for her. It will also be a long and brutal legal battle that the governor won’t handle with integrity, and the chances of winning — or getting any settlement money — are slim. But Nate doesn’t care. (And my pre-season prediction of his death still stands.)

Now that Xavier has been named in Nate Sr.’s trial, the police are searching for him — but there’s currently no evidence that connects Xavier with Gov. Birkhead (even though we know they’re very much in cahoots). To that end, the governor goes on television and maintains her innocence to the public, insisting that Emmett Crawford, who had both personal and legal ties to the Castillos, is really to blame for Nate Sr.’s death.

Meanwhile, poor, poor Bonnie learns about Miller’s innocence from a news report while she’s in her hospital bed. As you might expect, she’s completely crushed to discover the truth, and she asks security to take Frank away when he visits her room and insists he was protecting her by lying to her. She rolls over in her bed, sobbing with a horrified expression on her face. 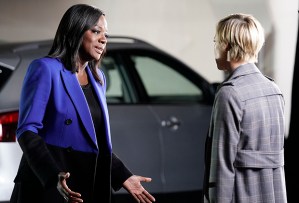 * While all of this courtroom drama is unfolding, the episode also jumps one week into the future, where Annalise is presenting her Middleton class with their final exam. She gives them all a hypothetical case involving Snow White and the seven dwarves — wow, even HTGAWM squeezed in a Disney+ plug! — and asks her students to come up with a solid defense. Whomever can best defend Snow White, who stands accused of conspiring to murder the Evil Queen, will score that beautiful $64,000 prize from Caplan & Gold that nobody claimed last semester.

In the end, Asher gets the money, because he’s the only one to realize — with a little nudge from Annalise, that is — that the Evil Queen faked her own death and framed Snow White for the murder. (Ugh, that’s so like her.)

But the queen isn’t the only one who might have staged her own demise: This week’s flash forward is all about Annalise, who we find in her apartment, tears streaming down her face. That fireplace poker we’ve been seeing all season is on the floor, next to shattered pieces of an item that was recently broken. Annalise grabs the new cell phone that contains her new identity (“Justine”), then places a call and follows a series of instructions to help her set up a new life. She wipes her hard drive, stuffs some money and her new passport into a suitcase, then packs up and leaves her building. Outside, there’s a car waiting to take her to a pre-determined location — and without hesitating much, she gets in the backseat and drives off.

* Michaela is a bit jealous to discover that Gabriel is now hooking up with classmate Peyton — and Gabriel’s being a total jerk about it. He calls Michaela a hypocrite because she’s been involved with multiple men during her time at Middleton, despite calling herself an independent feminist. He even insists she’s got daddy issues! (Which… she does, but you don’t need to say it, man.)

Gabriel’s harsh words leave Michaela shaken, and she’s overwhelmed by guilt when she remembers that Gabriel only came to Philly to get answers about his father — a man whose demise was partially Michaela’s fault. Asher tries to console Michaela, but when he leans in for a kiss at the worst possible time, Michaela asks him to leave. On the bright side? Asher did just win $64,000. So he’s got that going for him!

Your turn! What did you think of Thursday’s Murder? Any new theories as we head toward the fall finale? Hit the comments!