Thursday’s episode of How to Get Away With Murder is titled “I’m the Murderer” — but if you thought that meant we’d get clarity on whatever’s happening in those ominous flash-forwards, you would be mistaken. If anything, the horror that will unfold at Middleton in a few months just got more confusing, now that someone in Annalise’s circle has (potentially) confessed to being a killer.

Meanwhile, the latest episode brought Michaela’s love triangle to a complicated impasse, while Annalise contemplated a new romance. Oh, and Gov. Birkhead is back, because that mosquito just can’t seem to get swatted. Let’s break down the events of Episode 7:

SUIT UP | Annalise is surprised to learn that Tegan and Nate are now working together on a wrongful death lawsuit for Nate Sr. — but she’s more stunned to discover that Gov. Birkhead is among those named in the suit. Annalise is all too aware that if the governor gets involved, the truth about Ronald Miller’s innocence could come out, and that simply can’t happen. Even worse? Bonnie has convinced Tegan to let her work on the lawsuit, too, so the truth about Miller really, really cannot be a thing, like, even a little bit.

Annalise decides to recruit Frank, who agrees to scare Tegan out of filing the lawsuit. And he does a good job of spooking her, too: Tegan gets in her car one night to find a flash drive taped to her steering wheel, which contains paparazzi-esque photos of Cora going about her day. Tegan is thoroughly rattled and shows the snapshots to Nate and Bonnie, believing to her core that the Castillos are behind this. She’s too concerned about Cora’s safety to go through with filing — but Bonnie, who doesn’t seem totally convinced that the Castillos took those photos of Cora, agrees to file the lawsuit herself.

Later that night, Bonnie comes home and reveals to Frank that she’s moving ahead with the lawsuit (even though Frank was under the impression, via Annalise, that the suit had been scrapped). Frank — who I thought would have had a better poker face — flinches at the news, and a mischievous-looking Bonnie seems to take his reaction as confirmation that he’s up to something. Frank tries to talk Bonnie out of it, reminding her of how brutally the Castillos tortured him. But Bonnie is unswayed and asserts that the only way to move on from Nate Sr.’s death is to learn the truth about what happened.

At the end of the hour, Gov. Birkhead receives a copy of the lawsuit, and she asks Xavier Castillo to dig up dirt on Bonnie — a task he then outsources to a colleague who’s been tailing Annalise in Philadelphia. “Send me the Winterbottom file tonight,” he requests. “No problem,” the colleague replies. And, as is usually the case at 11 pm on a Thursday night, I am so worried. 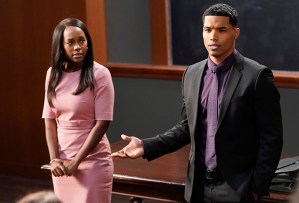 * Gabriel gets to be first chair in the clinic’s latest case, which he hopes to handle via restorative justice, an approach through which criminals can meet with their victims (or the community at large) and attempt some version of reconciliation through conversation. The case, which involves a school shooting, is a heavy one — and it seems to bring up a lot of old demons for the Keating Four. Asher, who’s already having a hard time in the wake of all that mama drama, thinks he and his friends should talk more openly about the horrible things they’ve done and seen, including whatever happened on the night Sam Keating died. (Shockingly, no one’s really up for that conversation.)

The restorative justice approach seems to weigh on Connor’s mind, too. At the end of the hour, he finally reveals to Oliver that he was “the one who chopped up [Sam’s] body” — and that leads us to a highly concerning, Oliver-centric flash forward. In it, a shell-shocked Oliver stands in the local police station, and Frank tries to usher him out of the building, assuring him that “Connor is smart, he’ll be fine.” But before the men can leave the station, Oliver breaks out of Frank’s grasp and runs up to the authorities, yelling, “I did it! Arrest me! I’m the murderer!” (The only thing that seems clear to me after this scene is that Oliver is not the murderer, but I probably shouldn’t assume that every flash forward is just a red herring.) (Even though it might be!)

* We learn that Michaela called it quits with Gabriel one month ago, after she and Asher hooked up. At first, Michaela lies her way through the break-up, telling Gabriel that she needs to focus on herself and her future as graduation looms. But after a particularly emotional testimony from Gabriel’s client later in the episode, Michaela feels compelled to admit that she cheated on Gabriel — and the truth ultimately leads to a brief fistfight between her suitors. Unsurprisingly, neither guy gets the girl this time.

* After much persuasion, Annalise finally agrees to a second date with Robert, the lawyer who assisted on a recent Caplan & Gold case and later took Annalise out for ice cream. This time, he invites Annalise over to his place, where he’s prepared a lovely home-cooked meal… and a side of emotional baggage. Robert reveals that his last two relationships ended poorly, and he’s been made to feel that he isn’t worthy of love; Annalise, for her part, vaguely alludes to the sexual abuse in her past, and Robert is sympathetic. It’s still unclear whether Annalise really wants to get involved with this guy — but they do share a romantic slow dance before the evening is over, and that’s gotta count for something.

And now, I turn it over to you. What did you think of Murder‘s latest outing? Drop all of your reactions and theories in a comment below!