There were no witches, werewolves or vampires present in How to Get Away With Murder’s Halloween outing — but an ongoing FBI investigation is scary enough, no?

Thursday’s episode found Annalise seeking a fresh start, while Michaela’s daddy issues worsened. Plus, the latest flash forward introduced a new piece of this season’s “Is Annalise dead?” puzzle (and it involved two characters we haven’t yet seen in the time jump).

Read on for the details of “Family Sucks”:

PAPA, DON’T PREACH | Michaela drops by Annalise’s apartment before her next class, and she’s stunned to find her father there. Michaela is still bitter about how Solomon treated her last week, but he insists that he’d hate to go his whole life without getting to know his daughter. That’s not enough to persuade Michaela, who would have preferred that Solomon were around when she was a kid — especially if he would have saved her from horrible parents and a racist school system.

But Michaela isn’t the only one that wants something from Solomon: As she hinted in last week’s episode, Annalise wants Solomon’s money, as well as his help getting out of Philadelphia and starting a new life elsewhere. In order to entice him, Annalise tries to repair Solomon’s relationship with his daughter, encouraging Michaela to let go of the hate she has for her dad. Solomon appreciates Annalise’s help, and he holds up his end of the bargain by calling a company called VIP Results, informing the woman on the other end of the line that he “might have a new client for you.”

Later, Solomon tells Annalise that the plan is in motion — though he reminds her that getting a fresh start would mean leaving behind everything good in her life, like friends and family. Annalise, ever the cynic, is totally fine with that, even when Solomon warns her that having a lot of money won’t necessarily make her happy. (Also of note? Annalise and Solomon were apparently an item, once upon a time. At one point, Annalise reminds Solomon that “you quit us,” and when Michaela later asks them if they were ever involved romantically, they get shifty-eyed and don’t answer, which obviously means they were. Their relationship isn’t explored any further in this episode, but y’all, I need answers.)

While Annalise anxiously awaits her departure from Philly, she decides to file a restraining order against the Castillos. And that’s where things get hairy. Solomon ends up getting subpoenaed to testify on behalf of the Castillos (?!), and during his testimony, the Castillos’ lawyer reveals that the FBI is investigating Annalise — and Michaela, for that matter.

Annalise, forever an HBIC, ends up making an emotional plea to the judge, revealing that her life will quite literally remain at risk if she doesn’t get this restraining order. Thus, she gets the restraining order. (Yay!) But Solomon is furious to discover that he’s gotten entangled with Annalise’s legal mess, especially one that involves his daughter, and they have a nasty confrontation in the parking deck. (The words “sad, lonely, greedy bastard” are thrown around, if that gives you any idea.)

Later, after successfully procuring that restraining order, Annalise smashes all of her electronics and encourages her students to do the same. She then receives a package at her door that contains fresh passports — her new name is Justine! — as well as a new cell phone. Meanwhile, Solomon visits Michaela at her house and reveals that he’s aware of the FBI investigation concerning her… and Michaela has no desire to accept his help. In fact, she goes on a magnificent rant to Solomon, insisting that she has achieved great things in her life, even without a strong father figure. “Thank you for abandoning me. It made me even greater than I already am,” she tells him, adding, “Please, don’t ever show up in my life again.” And with that, she goes inside and rips up that blank check.

* Connor remains fairly obsessed with the reason Annalise picked him to be in the Keating Five. She insists she doesn’t remember why she included him, but Connor is unconvinced, so he goes to Bonnie for the answer — and it turns out she was the one who chose Connor for the group, not Annalise. Bonnie and Frank were both allowed to select one student in the K5; he chose Laurel, she chose Connor. Though Connor doesn’t buy it at first, Bonnie explains that she was moved by Connor’s application essay, in which he revealed that he’d gotten a gay conversion therapy camp shut down when he was just an adolescent. She shares that she was abused as a child, and she wanted to champion a student who was committed to helping other victims. HTGAWM rarely makes time for anything warm and fuzzy, but this exchange between Connor and Bonnie is just lovely. 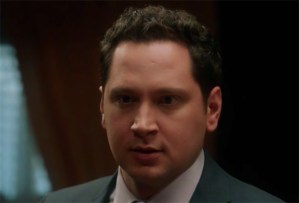 * Asher continues to spend time with his mom and sister, despite his mother’s continued depression. At the end of the hour, though, Asher reaches a breaking point: While saying a prayer at the dinner table, Lydia remarks that Asher should be forgiven for his sins — and Asher angrily reminds her that she should be the one asking for forgiveness, considering how quickly she abandoned Asher after his father died. Lydia continues to evangelize, prompting Asher to tell her that she’s going to hell before leaving his mom and sister behind for good.

That night, Asher heads to Michaela’s place and finally agrees that his family is a group of terrible people, which Michaela had tried to make him realize earlier in the episode. Asher then delivers a sweet monologue to his ex, insisting that she’s his real family, and he’ll never lie to her or abandon her, even if they don’t end up together romantically. Oh, and he’s still in love with her. And always will be. No big deal. In response, Michaela slowly approaches Asher and kisses him, then briefly stops herself. “Are you worried about Gabriel?” Asher asks. “He’s not the one, Michaela. It’s me.” And with that, their makeout session resumes. (In case you’re wondering how Gabriel actually fits into all of this, he and Michaela are once again on the outs, after he blabbed to Annalise that Michaela had reunited with her birth father. But considering Asher and Michaela broke up because of infidelity, I’m having a hard time believing that Asher would so easily let himself become the other man.)

* Speaking of Asher, he’s the focus of this week’s flash forward, and I am nervous. There’s a knock on Bonnie’s door, and she answers it to find Asher standing there, looking nauseated and bewildered and all-around horrified. When he comes inside, he turns to face Bonnie, and we can see the dress shirt he’s wearing under his graduation gown is covered in blood. (Noooo! Leave Asher out of this!)

* After meeting Tegan’s ex-wife last week, Nate seems to be getting much cozier with Cora. They go on a pseudo-date (…to the gym…), then Nate invites Cora back to his place. It all seems very sexy… until Nate leans in for a potential kiss, and Cora reveals that she knows what Nate is doing. She’s aware that Nate is looking for intel on Tegan, and she records a snippet of their conversation in which Nate admits he’s doing just that. Cora then sends that recording to Tegan, who fires Bonnie for being Nate’s spy at Caplan & Gold — even though Bonnie has largely taken Tegan’s side in all of this.

Later, Tegan confronts Nate herself, swearing on the grave of just about every family member that she had nothing to do with Nate Sr.’s death. Nate remains totally skeptical, and Tegan’s annoyed. “Come at me again, and you’ll be seeing your father sooner than you think,” she fires back. (Uh, probably not the best way to ward off suspicion, but you do you, girl.) But when Annalise defends Nate’s actions, insisting that he’s been hardened by the traumatic events of recent years, Tegan has a (reluctant) change of heart. She goes back to Nate’s apartment and presents him with a wrongful death lawsuit that they can file against the prison, the D.A.’s office, and just about anyone else connected to Nate Sr.’s death. Nate isn’t initially swayed and tells Tegan that he doesn’t want money — but she counters that this lawsuit would be the first step in finally avenging his father’s murder.

* Frank, who has been discharged from the hospital and is now on bedrest at Bonnie’s place, gets a visit from Annalise. She’s heartbroken to hear that Frank suspects her as the reason for Laurel’s disappearance — and she reminds him that the night Laurel went missing, she and Frank concocted their own lie in order to hide the truth about Miller’s innocence. Frank suggests that he and Annalise come clean about Miller, and she rejects that idea, knowing full well that Bonnie could become suicidal again if she learns that Miller had nothing to do with Nate Sr.’s death.

In fact, Annalise even takes Frank’s painkillers away, so that he can’t blurt out the Miller secret to anyone while he’s high as a kite. Later, though, Bonnie realizes that Frank is sweaty and restless, and she gets a new prescription filled for him after learning that Annalise swiped his meds. And though Frank does get a little loopy once he’s back on those painkillers, the topic of Miller doesn’t come up; instead, he asks Bonnie why they haven’t made good on their plan to ditch Philly and move to Oregon, which they agreed on seasons ago. A tearful Bonnie says she can’t start a life with Frank just yet, because she’s not quite over Miller. “I’m not saying no,” she assures him. “I just need more time.”

Your turn! What did you think of the latest Murder? And how do you think Asher is involved in the flash forward? Drop a comment below!