By the time How to Get Away With Murder airs its final episode, I suspect I’ll have to be formally diagnosed with hypertension. We’re now five weeks into the show’s final season, and so many characters seem to be in imminent danger that my blood pressure just won’t stay down.

Judging by the flash forward in Thursday’s installment, the concern for Annalise & Co. won’t go away anytime soon — especially not for Frank, who barely made it through Episode 5 at all. Let’s break down what happened in “We’re All Gonna Die” (see, those ominous episode titles really aren’t helping my angst):

FRANK AND SPILLED BEANS | Last we saw Frank, he was unconscious in Bonnie’s doorway, looking mighty close to death. In this week’s episode, a series of flashbacks reveal how he got so banged up, leaving Annalise and Bonnie to deal with the aftermath in the present day.

Let’s start with the flashbacks first: After encountering Frank at that safe house where Laurel was allegedly dropped off, Xavier Castillo implores Frank to help him find his sister. “I’ll kill you before I ever let you see Laurel again,” Frank responds — which was definitely the wrong answer. Frank gets violently tased as he’s attempting to leave the building, and when he comes to, he’s tied to a chair with Xavier a few feet away. Xavier teases that the FBI is working with an informant from Annalise and Frank’s inner circle, who is offering up precious intel on their group. Xavier will give Frank the informant’s name… but only if Frank agrees to help find Laurel.

Once again, Frank refuses, mouthing off to Xavier as he does so, which prompts one of Xavier’s men to pummel Frank with a baseball bat. The next time Frank regains consciousness, he reveals that he visited Laurel’s safe deposit box, only to find it was empty. That’s when Xavier confirms what several of you have already suspected: that the woman who was photographed leaving the bank that day wasn’t Laurel, after all. It was merely Xavier’s assistant, who looks a lot like Laurel from behind; not only did she empty the box, but she delivered all of the goodies inside, including Wes’ damning confession, to Xavier. 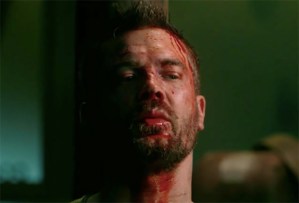 Frank still refuses to assist with Xavier’s search for Laurel, and he gets brutally electrocuted (!) for being difficult. But he’s still clinging to life, even after this latest punishment, so Xavier presents him with one last piece of information: a statement from Annalise’s account at Bermuda North Atlantic Bank, which now contains $208,000. You’ll recall that in last week’s episode, Annalise transferred $50,000 into that account, which left her with that substantial sum. But Xavier tells Frank that all of the Castillos do their offshore business with Bermuda North Atlantic — which must mean that Annalise helped Laurel get away, got paid $208,000 for her services and currently knows where Laurel is hiding.

Meanwhile, in the present day, Frank is rushed to the emergency room and briefly comes to while the doctors are evaluating him. He makes eye contact with Annalise and says, “Laurel,” but he’s sedated before he can provide more information. Later, after undergoing emergency surgery, Frank wakes up and seems to be in a lot of pain, gagging and clutching at his breathing tube. Bonnie quickly calls for a nurse, and the next thing we know, she’s calling Annalise’s cell phone, sobbing as she urges Annalise to come back to the hospital ASAP.

When Annalise gets there, Bonnie tells her that Frank is awake — and he’s shared the major news that Annalise helped Laurel go into hiding. Annalise is stunned at this accusation, insisting to Bonnie that it isn’t true; yes, she does have all that money in a separate bank account, but it’s her money. She recently convinced Caplan & Gold to give her a bonus, and she added it to the dough that she’s setting aside for herself, in the event that someone turns on her and she needs to make a quick getaway. She tries to comfort an inconsolable Bonnie, telling her that this was Xavier’s plan all along; he tortured Frank in order to torture the rest of the group, forcing them to turn on one another so the Castillos can win. (Later, Bonnie tells Frank that she believes Annalise, but he remains skeptical. In other news, Frank tells Bonnie that he loves her, as if she needed any more emotional manipulation.)

Later, Annalise calls up her bank one more time and asks to check her balance… which has plummeted to a measly two dollars and 17 cents. Upon insisting that her account should have more than $200,000 in it, the BNA employee confirms that a withdrawal was recently made. Annalise, in turn, dials up Solomon Vick — Michaela’s birth father! — and tells him, “It’s time to pay up.”

* Tegan’s wife, Cora, arrives at the Caplan & Gold offices to finalize their divorce paperwork. During their conversation, Cora reveals that she and Patrick — aka the man for whom Cora left Tegan in the first place — have split up. This news rattles Tegan to her core, and she shows up at Annalise’s apartment that night, drunk and teary-eyed and devastated to confess that she’s still in love with Cora. “The bitch is in my blood!” she sobs, adding that she admires Annalise for always being honest about her messy, complicated life.

The next day, Tegan tells Cora that she still misses her — and Cora cuts deep by admitting that she doesn’t miss Tegan, and hasn’t for quite some time. “God’s honest is I wasn’t in love with you anymore. I’m not in love with you now,” she tells Tegan. “It’s over, T. We’re over.” (Tegan, to her credit, maintains a solid poker face and calmly thanks Cora for her honesty.) With that, they sign the divorce papers, and Cora leaves C&G… and that’s when Tegan utterly loses it, falling to the floor and sobbing.

In the meantime, Nate has spent the entire episode trying to convince Bonnie — and now Annalise, too — that Tegan is somehow involved in the whole Laurel mess. The women refuse to believe him, but he won’t let it rest. That evening, when Cora is attempting to leave Caplan & Gold for the last time, her motorcycle won’t start… and Nate suddenly appears in the C&G parking deck, asking her if she needs help. 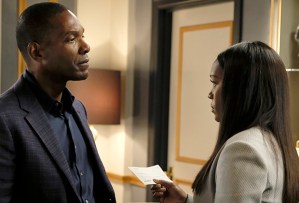 * We get to see the rest of Michaela’s conversation with her dad at that NYC hotel, where she interrogates him about his choice to abandon her and let her get adopted as a child. Solomon insists that Michaela’s mother didn’t want anything to do with him once she got pregnant, and he regrets not having a bigger role in Michaela’s life during her childhood. But by the time he looked her up, he could see she was doing fine and thriving academically; when he learned she was at Middleton, he merely called Annalise and asked her to keep an eye on Michaela, “which she’s done, I hope.” (Ha! If he only knew.)

The next day, Michaela visits Solomon’s hotel room for more ice-breaking conversation — but instead, he recruits her as his business partner. Remember that $500 million fund he created last week to help female entrepreneurs? Well, it’s getting a lot of interest, and Solomon wants Michaela to help him choose the HBICs with whom he’ll do business. Michaela accepts the offer — after negotiating herself a better cut of the earnings, of course — but their working relationship is immediately tense. Solomon won’t listen to Michaela’s input, and he can’t go more than five minutes without taking a call or checking his phone.

When Michaela calls her dad out on this, he asks how he can possibly get her to trust him. “Give me money,” Michaela says. And she’s very serious. In fact, “Don’t think this is a one-time payment,” she continues. “I researched your net worth.” Solomon agrees to give Michaela’s bank account a little boost, and he writes her a blank check. “Take whatever you think you deserve,” he tells her. With that, Michaela heads back to Philly and shows the blank check to her roommates. They urge her to take the money and run, but she’s convinced that Solomon is trying to trick her into revealing how much she thinks she’s worth. Regardless, Michaela doesn’t make a decision about the moolah in this episode — but she does make up with Gabriel after a little urging from Connor, admitting that Gabriel wasn’t totally wrong to take Solomon’s side in New York.

* Asher’s sister, Chloe, begs him to come back home for a while. Their mother is in bad shape these days, and Chloe is concerned that she’ll take her own life, just like their father did. At first, Asher has no interest in a family reunion; he insists that Michaela, Connor and Oliver are his real family, considering they supported him after his dad’s suicide, even when Chloe bailed on him.

But Chloe calls Asher’s bluff, insisting that he’s got sadness in his eyes, and he’s pretending to be someone he’s not — just for the approval of people who don’t deserve his friendship. That argument seems to break down Asher’s walls, and he agrees to come home, where he finds his mother looking disheveled and weepy.

* In this week’s flash forward, Tegan arrives at Asher and Gabriel’s apartment building, which has since become an active crime scene. She demands to be allowed upstairs, since “I represent a suspect in this case,” but the police won’t let her past the caution tape — and as they bicker, the camera pans up the stairs and into the upper hallway, where we find a single bloody handprint and an alarmingly substantial pool of blood.

OK, your turn. What did you think of Murder‘s latest episode? Any theories on that new flash forward? Hit the comments section below with your thoughts!