Here’s something we’ve known since How to Get Away With Murder’s very first episode: You don’t want to mess with Michaela Pratt. (Need I remind you of her fabulously sassy, “Pay attention. You might learn something.” from the show’s pilot? She’s always been a boss.)

But a whole lot of Murder characters have made the mistake of breaking the don’t-cross-Michaela rule — including two gentlemen in Thursday’s episode. Meanwhile, someone in Annalise’s inner circle was put in grave peril. Let’s break down what happened in “I Hate the World”:

TAKE YOUR DAUGHTER TO WORK DAY | After lying to their classmates that they’re spending a weekend in the Poconos, Michaela and Gabriel head to New York City, where Michaela’s birth father, Solomon Vick, is giving the keynote lecture at a swanky conference. His talk is titled “Using Male Privilege to Invest in Female Power,” and even though his feminism comes off a bit misogynistic, the mostly female audience eats up everything he says. He’s also creating a $500 million fund to invest in women entrepreneurs, which gets another loud round of applause… but Michaela isn’t impressed.

The next day, during Solomon’s second panel at the conference, Michaela stands up in the audience for a little impromptu Q&A, asking Solomon if he holds himself accountable in his personal life as much as he does in his professional life. He assures Michaela that he does, and she asks if he’s ever slept with a client. After all, if he had, that would mean he takes advantage of vulnerable women, which would make his feminist message seem a little thin, no? Solomon adamantly denies that he’s ever done anything like that, but he keeps his eye on Michaela — who used the alias Laurel Castillo during their confrontation — even after she’s done talking. 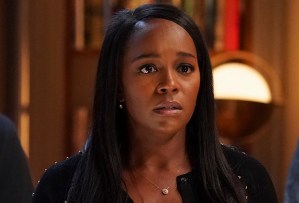 Of course, Michaela didn’t just find Solomon to get mad at him in a public setting: She also wants to get some of his DNA for a paternity test. After unsuccessfully trying to swipe a glass he’d used at the hotel bar, Michaela later sneaks into Solomon’s room when housekeeping opens his door. She manages to snag some of his toiletries, like a comb and toothbrush — but Solomon comes back to the room before Michaela can leave. He catches her just as she’s trying to make a stealthy exit, then says, “I know you’re Michaela.” Michaela, completely stunned and speechless, simply bursts into tears and leaves the room without replying.

Later, Michaela pulls herself together and heads down to the bar, where Solomon is having a drink. When he offers her a seat, she has one request: “Only if I get to ask you whatever questions I want.” Solomon agrees, confessing that “I’ve been waiting for this day a long time.”

Throughout Michaela’s pursuit of her father, Gabriel offers consistent moral support — but when Michaela suggests breaking into Solomon’s hotel room at one point, Gabriel’s not into it. He’s annoyed that Michaela won’t just have a conversation with her father, considering they’re staying in the same hotel, when the only connection Gabriel can have with Sam is the sound of his voice on those tapes of Annalise’s therapy. He and Michaela exchange some harsh words (“Maybe this is why people leave you. Because you won’t listen to anybody but yourself,” Gabriel remarks), and she ultimately tells him to get out if he can’t support the way her journey with Solomon is unfolding.

But Gabriel has another pressing issue to address: Upon returning to Philly, he confronts Annalise with one of her therapy recordings, in which she’s discussing her recent breakup with Eve. Despite Annalise’s consistent argument that Sam manipulated her into a relationship, her voice on the recording says differently: “I met someone else. A man. He’s kind, caring, handsome — problem is, he’s my therapist.”

* Nate’s conversation with the FBI picks up where it left off last week: The agents will give him intel on his father’s murder if he’s willing to contribute to the Annalise investigation. They even tempt him with a job at the FBI if he helps them. (And “Special Agent Lahey” does have a nice ring to it.) But Nate refuses to assist with the Annalise sitch until his father’s case is closed — and after Bonnie swipes Tegan’s divorce papers from her desk, she gives them to Nate, who then gives them to the FBI. The divorce papers contain all of Tegan and Cora’s financial information, and surely the agents can find some connection that leads back to the Castillos.

As it turns out, Tegan’s money is linked to the Castillos; she owns stock in a company called Barrington Holdings, which apparently Laurel owns. Bonnie suggests that the company is merely in Laurel’s name, and it could mean nothing. But Nate counters that Tegan may have helped Laurel run away, and perhaps this stock — which is worth a whole lotta dough — is how Laurel paid her for her service. Later, Bonnie comes clean to Tegan about peeking at her divorce papers, and she doesn’t think Tegan should sign them. After all, her stock in Barrington Holdings has only become more valuable since separating from Cora, and why should Cora get half of those dividends when she doesn’t deserve them?

That’s when Tegan reveals — well, “reveals,” depending on whether you believe her or not — that Jorge Castillo gifted her that stock years ago, back when she worked at Caplan & Gold’s Mexico office. “I regret what I did to get it,” she sadly tells Bonnie. Later, Bonnie takes this intel back to Nate, who isn’t so easily convinced that Tegan’s a good guy. On the contrary, he thinks Tegan has figured out that Bonnie and Nate are digging into her, and she must have spun that story to cover her booty.

Bonnie is disappointed in Nate’s skepticism, and she’s even more heartbroken to realize he’s talking to the FBI. Nate tries to assure her the situation isn’t like that, but he’s interrupted by a knock at Bonnie’s door. When she opens it, a limp body slumps to the floor: It’s a very bloody Frank, and he looks very close to death.

* Annalise goes on an ice cream date with Robert, a lawyer who assisted with Caplan & Gold’s latest case. She’s suspicious that he works for the FBI, but Robert insists that he’s spending time with Annalise because he’s genuinely interested in her. What’s more, she shares some of her most damning secrets — the alcoholism, the accusations of killing Sam, etc. — and he doesn’t seem alarmed by them. Granted, Robert doesn’t want to fix Annalise, and he won’t chase after her, but he’s excited to spend more time with her, if she wants that.

* In this week’s (brief) flash forward, the FBI agents call for a medic after Connor collapses to the floor, and Michaela — who’s dressed in her graduation gown — pounds on the wall connecting her room with Connor’s, frantically asking if he’s OK. Girl, that’s a hard no.

Your thoughts on Murder‘s fourth installment? Drop ’em in a comment below.