How to Get Away With Murder’s final season is barely underway, but it’s nonetheless been rough for Michaela Pratt.

Thus far this season, Michaela has been blindsided by Annalise’s connection to her birth father, tracked down said father only to discover that he’d died in prison, unceremoniously lost her best friend and met her boyfriend’s mother in the World’s Most Awkward Encounter. Remember the simpler times, when her biggest shock was a gay fiancé? Ah, to be a 1L again.

Fortunately, in Thursday’s episode of the ABC drama, Michaela gets a major win in the courtroom, with a little assistance from Annalise. But Murder wouldn’t be Murder if its characters were actually allowed to be happy for a while; naturally, Michaela’s victory is eclipsed by some horrifying personal news. Let’s recap what went down in “Do You Think I’m a Bad Man?”:

THE PROOF IS IN THE KEATING | Michaela gets to take the lead on the next case for Annalise’s clinic: Brandi Green, a black woman, has been slapped with a whole slew of charges after her attempt to rob a bank with her husband led to her spouse getting killed by a cop during the police chase that ensued. At first, Michaela merely wants her client’s restitution to be dropped to zero dollars and zero cents, down from the $102,000 that she currently owes. But when the prosecution introduces a felony murder charge against Brandi — after all, her husband was shot and killed during a crime she was also committing — Michaela must go back to the drawing board.

Even though Michaela resists his input, Gabriel has a smart idea: Get Brandi on the stand, especially since her testimony could get this case a little attention in the press. Annalise agrees that Brandi should testify, but there’s a catch: Gabriel should be the one to question her on the stand, and if he loses the case, he goes back to Virginia with his mother. “Deal,” Gabriel tells her.

The next day, Gabriel’s questioning of Brandi actually goes remarkably well; he’s sympathetic to the loss of her husband, and she gets understandably emotional. Her cross-examination, however? Total disaster. The prosecutor continues to badger Brandi, insisting that Brandi’s desire to open a food truck with her husband ultimately led to his death — and Brandi eventually cracks, threatening to “cut your head off, you stuck-up-ass skank.” Yikes.

Following that outburst, Michaela has reached a dead end, and she frantically begs Annalise for a little guidance. Annalise cryptically hints that Sam’s death somehow holds the answer for which Michaela is looking. The conversation that follows is all very vague and hush-hush — Michaela asks Annalise why she keeps protecting her students when she could have turned them in long ago, and Annalise asks her to reflect on what she just said — and Michaela finally has a lightbulb moment: The D.A.’s office must be afraid that Brandi will file a wrongful death lawsuit regarding her husband, which is why they’re arbitrarily slapping her with this felony murder charge after she wouldn’t take a plea deal.

Michaela makes this exact argument the next day in court, when she’s questioning one of the prosecutors. She passionately asserts that the D.A.’s office is trying to make Brandi suffer for one simple choice she made: the mere desire to have a better life. I’ll spare you the legal jargon that follows, but Michaela ultimately gets the win. The felony murder charge against Brandi is dropped, and she agrees to take probation, even if that means she can’t file a wrongful death suit in the future. 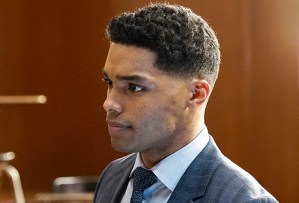 Unfortunately, Michaela can’t bask in the afterglow for too long. While all of this drama is going down inside the courtroom, there’s plenty happening outside of it, too. Gabriel’s mother, Vivian, inserts herself into Michaela and Gabriel’s case, showing up to watch every plea hearing and cross-examination. After she witnesses Gabriel’s oh-so-smooth questioning of Brandi, she’s practically glowing with pride — and she tries to tell her son that he isn’t great because of Annalise. He could be great anywhere, even without Annalise’s help, and she wants him to come back to Virginia with her. But Gabriel gets evasive and ends the conversation abruptly.

Days later, Vivian is in the courtroom when Michaela gives an intense defense of Brandi, vehemently arguing that Brandi should not pay a lifelong price for one mistake. Vivian seems taken aback by how passionately Michaela is speaking, and she’s convinced that Michaela’s words must be coming from personal experience. After the court proceedings are over, Vivian corners Annalise in the hall and asks if Michaela was really talking about Sam’s death — but just as she’s getting riled up, Gabriel interrupts and insists he should be the target of her anger. He pulls her out to the courthouse’s parking deck, where he tearfully confesses that he did cause her boyfriend Paul’s death, but only because he wanted to protect her.

“Do you think I’m a bad man?” Gabriel sobs to his mother. “No,” she insists. “You have a good heart, because you’re a good man and a good son. I’ve got you now. You hear me? I’ve got you.” But it seems Vivian has an ulterior motive here: When Gabriel returns to his apartment that night, he finds a note from his mother that reads, “You’re a good person. Annalise is not. Love, Mom.” She’s also delivered a box to his doorstep — the same box we saw her stashing in her closet two weeks ago, labeled “Sam Keating.” Gabriel opens it to find a whole bunch of cassette tapes, each one containing a recorded therapy session between Annalise and Sam.

Later, Gabriel calls Michaela over to his apartment and reveals that he’s only listened to one tape — but he heard something crucial on it. As he plays back the audio for Michaela, we hear Annalise telling Sam that all lawyers are bad people. In fact, she had a super-skeezy boss on one of her very first cases… which happened to be Michaela’s birth father’s trial. “I found out [my boss] was screwing our client’s wife,” Annalise reveals on the tape. “Got her pregnant, too. Our client thought it was his kid the whole time.”

“Your dad wasn’t the client, Michaela,” Gabriel confirms to his horrified girlfriend. “He was the lawyer.”

* Frank goes to Oliver and tells him about Laurel’s safe deposit box — and shows him a photo of Laurel that he grabbed from a street camera, which seems to show Laurel getting into a cab right outside the bank (even though her hair covers her face). Oliver obtains the cab driver’s address, and Frank eventually gets the driver to talk, even though he was threatened by some people who do not want Laurel’s whereabouts revealed. He gives Frank the address of a safe house where he dropped off Laurel, and Frank checks it out for himself. It’s dark and dingy and warehouse-y in there, but he does spot a crib in one corner… and just when he is looking at it, Xavier Castillo walks in with an ominous, “Hey, Frank.”

* Connor, who last week made a big promise that he would get asylum for a young immigrant woman and her son, realized in Thursday’s episode that he was in over his head. When Marisol, the client in question, is forbidden by her boss to leave work so that she can fill out an asylum application, Connor does a completely insane thing and travels to Maryland with Marisol’s 8-year-old son, Hector, in tow. At first, he’s pleased with himself: When Marisol gets off the bus and sees her son, they have a wonderful reunion. But minutes later, just as Marisol is filling out the paperwork that Connor brought for her, two officers show up and take both Marisol and Hector into ICE custody. 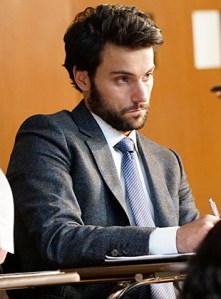 Fortunately, Bonnie and Tegan both come to Connor’s aid, with Bonnie pretending that she still works at the D.A.’s office. (Reminder: She very much does not, after falsifying an arrest report for Vivian Maddox.) But when Bonnie’s ludicrous plan doesn’t work, Tegan saves the day, making a quick phone call to a very important person at the Department of Homeland Security. Marisol and Hector are swiftly released, and Tegan reveals that the woman she called for help… is also her wife. (Meanwhile, Bonnie gets a job with Caplan & Gold, despite Tegan’s suspicions that Bonnie is spying on her for Nate. And her concerns are accurate! After getting hired at the firm, Bonnie sends Nate a selfie from her office with the caption, “I’m in.”)

Speaking of Nate, he goes to the FBI and presents them with that photo of Tegan and Jorge Castillo at a 2009 conference, urging them to look into her. They insist they can’t discuss an ongoing investigation — but later, they bring him in and deliver some interesting news. They may have evidence that suggests Ronald Miller wasn’t involved in Nate Sr.’s death, after all… but they’ll only disclose it to Nate if he gives them some helpful intel for their Annalise investigation.

* This week’s flash-forward focuses on a disheveled-looking Connor, who is getting interrogated by the same FBI investigators. “The sooner you talk, the better your deal,” they tell Connor, who wants to remain silent. Then, they decide to show Connor proof of the murder that has taken place, sliding a folder across the table that contains gruesome photos. (We don’t see who’s in the pictures, of course — just that there’s a lot of blood.) “You did this. Tell us why,” the male agent urges Connor. That’s when Connor starts laughing maniacally… until the cackles turn into hyperventilation, and he suddenly falls to the floor, clutching his chest.

OK, your turn. What did you think of the latest Murder? Drop a comment!