If you’re a character on How to Get Away With Murder, chances are frighteningly high that you don’t have a healthy relationship with your parents.

Sometimes, it’s just the mom. Other times, it’s just the dad. In most cases, it’s both! But at this point, it’s well-established that anyone in Annalise Keating’s life — Annalise included — has enough family-related baggage to fill up an entire Middleton classroom. That’s especially true for Gabriel Maddox, as we learned in Thursday’s episode.

Let’s break down the events of “Vivian’s Here”:

After settling in at her new pad, Gabriel’s mom, Vivian (played by When They See Us‘ Marsha Stephanie Blake), pays Annalise a visit on Middleton’s campus. Annalise, as you might expect, isn’t thrilled by Vivian’s arrival, but she tries to remove herself from the situation as quickly as possible; she tells Vivian to have a long chat with Gabriel, then tells Gabriel to have a long chat with Vivian, and her involvement would ideally end there.

Naturally, things quickly get more complicated than that. Vivian does show up at Gabriel’s apartment to have a conversation with him, but their talk reveals some uncomfortable truths — for example, the fact that Sam and Gabriel accidentally met when Gabriel was 11 years old, which Vivian never knew until now. She insists to Gabriel that she only withheld information about Sam because Sam was not a good person, and Gabriel deserved a better example of what it’s like to be a man. 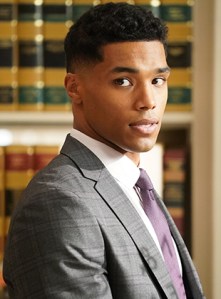 Meanwhile, the Keating Four remains suspicious of Vivian’s timing; after all, isn’t it a little too convenient that Vivian comes to town right when the FBI is investigating everyone in Annalise’s circle? Asher (half-)jokes that Vivian and/or Gabriel must be a mole for the FBI — and even though Michaela is sure that Gabriel isn’t a mole, she does reveal that Gabriel killed Vivian’s boyfriend in the past. (We already knew that Paul, the boyfriend in question, died via overdose after someone slipped him a sufficient amount of pills.)

The rest of the Keating Four promises not to share this intel with Annalise… but Asher can’t leave well enough alone and spills the beans to Annalise after class one day. Annalise, looking understandably exasperated, says they can’t use that information. “We can’t keep hurting people and expect them not to hurt us back,” she says.

Later, though, Annalise gets a worrying piece of news: Nate shows her a photo of Vivian that was surreptitiously snapped, in which Vivian is chatting in a car with the male FBI agent who’s spearheading the investigation into Annalise & Co. Armed with this new information, Annalise goes to Vivian and reveals that Gabriel killed her boyfriend. Vivian, in turn, shows up at Gabriel’s apartment and asks him a loaded question: “So, you’re a killer now?” When he doesn’t answer, she reminds him, “Paul,” and Gabriel suddenly looks very concerned.

* Oliver helps Michaela locate her birth father, Dwight Halpern, who seems to be locked up in a Virginia prison. Michaela makes a spur-of-the-moment trip to the penitentiary, only to find that he was relocated two years ago to a prison in upstate New York. She then drives there… and discovers that her dad died in prison last year after suffering a stroke. Upon hearing the news, a sobbing Michaela confronts Annalise and insists that she could have seen her father while he was alive, if only Annalise had shared her connection to him. “I hate you! I hate you!” Michaela screams, simultaneously collapsing into Annalise’s arms for comfort.

We also get a new piece of the flash-forward puzzle, in which Michaela — face streaked with tears and mascara — sits alone in an interrogation room. When two FBI agents walk in, they reveal that Michaela’s fingerprints are on the murder weapon, presenting a photo of the same fireplace poker Michaela was wielding in the last episode. “It’s all over,” the male agent says. “I want my lawyer,” Michaela replies.

* Remember that key Frank discovered in one of Laurel’s picture frames last week? It belongs to a safe deposit box at a nearby bank, but Frank can’t currently access it because he’s not on the authorized list. Assuming that Laurel’s father, Jorge, is the other family member on the list, Frank pays Jorge a visit in prison — but Jorge insists he doesn’t have access to the box (and he has some not-very-nice things to say about Laurel in the meantime).

Frank finally reveals his side project to Annalise, who looks nauseous as she reveals that Wes is the other person on the bank’s list of VIPs. What’s more, she knows what’s in that box: a letter that Wes wrote years ago, which (presumably) details all of the Keating Five’s misdeeds regarding Sam, Rebecca and more. Frank, ever the problem-solver, creates a fake ID in order to pose as Wes and get access to the box… but when he does get in, he finds the box is empty, and the clerk reveals that Laurel Castillo was the last person to access the box just three days ago. (Still, we might not be seeing Laurel on screen anytime soon.) 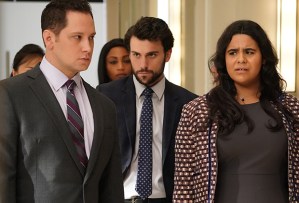 * Since Laurel is suspiciously absent from school these days, Asher gets to take her place in Annalise’s legal clinic (which is apparently still a thing!). He and Connor get to take the lead on Caplan & Gold’s next case, which involves an 8-year-old boy who’s been separated from his immigrant mother and been traumatized by experiences with ICE. Despite the language barrier with his client (and Annalise’s refusal to help much, since Connor’s graduating in three months), Connor manages to get the boy placed into foster care. He also promises the child that he’ll protect his mother and get her asylum… but that is a very big promise, and one he might not be able to keep.

* Upon Vivian’s arrival in Philadelphia, Annalise asks Bonnie and Nate to dig up some dirt on the woman — ideally something damning enough that she’ll pack her bags and go back to Chicago. Bonnie discovers that there’s a sealed file in Vivian’s arrest record, and she’s so determined to get it unsealed that she fabricates a report from the D.A.’s office in order to get the job done. That seems to work at first, but she’s later confronted by two FBI agents, who have been investigating the D.A.’s office for corruption ever since Miller’s death. Bonnie tearfully comes clean about fabricating the report and apologizes profusely — but no luck. She’s fired from her job at the office, effective immediately. (And suddenly, my prediction that Bonnie won’t survive this season seems even more plausible. Noooo!)

Your turn! What did you think of the latest Murder? Drop a comment below!