We’re only one episode into How to Get Away With Murder’s final season, and I’m already very worried about Annalise Keating.

I suppose that’s nothing new, given that Annalise self-destructs on the regular. But in the first hour of Murder’s sixth season, the ABC drama stages two funerals for Annalise: one imagined, and one (seemingly) very real.

GRAVE DANGER | We begin at a gravesite, where Connor, Oliver, Michaela, Asher, Bonnie, Frank and Nate are standing over a casket. “We’re free now,” Bonnie says sort of dreamily as a eulogy is given. Then, a slightly older version of Laurel’s son, Christopher, runs up to the coffin before anyone can stop him, opening it to reveal Annalise’s body. Christopher brandishes a gun (!) in her face and says, “Stay dead, bitch!” — and just when Coffin Annalise opens her eyes, we learn that this is all a vision in Real Annalise’s mind.

Annalise, it’s soon revealed, has been in a rehab clinic called Vista View since the night Laurel went missing, and that funeral visualization was part of a group therapy exercise. Via flashbacks, we learn that Annalise went to a bar after Laurel vanished, where she received a phone call from Tegan that Emmett Crawford had died. (Yes, he’s really dead: We see the body bag on a stretcher and everything.) From there, Annalise quickly spiraled, drinking glass after glass of vodka before doing cocaine, MDMA and fentanyl with a stranger in the bathroom. She ultimately collapsed on the dance floor and was rushed to the hospital, where she begged Bonnie to get her some help for her drinking.

But now, it’s a few days later, and Annalise has no real interest in doing the work. (She even calls herself “Karen” at Vista View, as if she could possibly be more emotionally guarded.) Her perky roommate, Sally, tries to befriend Annalise to no avail, and the addicts in her therapy group call her out on BSing her way through rehab. There’s even a group exercise that Annalise can’t bring herself to participate in: Members are supposed to write down the awful words they call themselves — Annalise’s include “trash,” “monster” and “failure” (oh, my) — and then mercilessly smack the index cards with a plastic baseball bat, beating out all of their shame and guilt and self-loathing. Everyone else in the group gets really into it, but Annalise simply can’t.

It isn’t until later that Annalise lets her walls down, after Sally tearfully confesses that she hates being a mother and wishes she could run away forever. “My name is Annalise Keating,” our girl reveals at last. “People think I murdered my husband, but I didn’t. I helped cover it up.” (To Sally’s credit, she doesn’t rat on Annalise after hearing that news, but instead repeats Vista View’s mantra to her: “Annalise, I see you and I love you.”)

In her one-on-one session with her therapist, Annalise insists that she’s a selfish person; she always chooses herself, even though she’s trying to protect others in the process. Her therapist suggests that isn’t selfishness. In fact, Annalise isn’t selfish enough, and she won’t be able to heal until she puts herself first and loves herself. With that advice in mind, along with her burgeoning friendship with Sally, Annalise returns to her bedroom and finally takes part in the index card-baseball bat therapy. 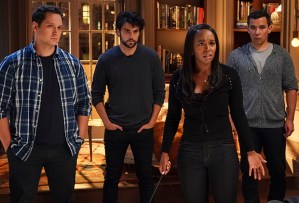 By the end of it, Annalise is doubled over and sobbing — as are we all! — but she feels well enough afterward to head back to Philadelphia, knowing that her people need her. And yet, she isn’t interested in solving Laurel’s disappearance or worrying about the FBI investigation. Instead, she gathers Michaela, Asher, Connor and Oliver at her house and encourages them to do the same therapy that she just did at Vista View, beating one of her ottomans with a fireplace poker as they bury “all of the lies and the fear, the guilt and the shame” from the past few years.

Asher goes first (“You’re a good guy, Asher!”), followed by Connor (“There’s good in me!”) and Oliver (“I’m a strong, confident, powerful man!”). Michaela isn’t into it at first, but she gets there with some prodding from Annalise. “I choose me — so goodbye, Laurel,” Michaela spits. “You’re dead to me!”

After they’ve all exhausted themselves, Annalise asks if they feel better — and Asher counters that he’d feel a lot better if Annalise told Michaela about a secret she’s been keeping. Both women are equally confused, so Asher clears it up: “Annalise knew your birth father,” he tells Michaela. And just like that, Michaela and Annalise’s relationship goes poof. “If that’s true, I’m gonna kill you,” Michaela tells her professor, wielding the poker so intensely that I start to wonder if Annalise will die right then and there.

Instead, we get a flash-forward. It’s all a bit vague at first: A wall is splattered with blood, and an object that seems to be the same fireplace poker clatters to the ground. Then, we’re at another funeral, and a throng of people is crowded around another casket. As the minister prays, a slow pan reveals a framed photo of Annalise that’s surrounded by flowers. “We ask you, oh Lord, to lift up our dearly departed Annalise and give her peace,” the minister concludes. “Amen.” (Like I said: I’m so worried about Annalise.)

* In the wake of Emmett’s death, Tegan becomes a managing partner at Caplan & Gold, and Nate isn’t buying what Tegan is selling. Not only does he find Emmett’s death suspicious, but it’s odd that Emmett’s body was transferred back to London for an autopsy — an arrangement that Tegan signed off on, though she claims she was pressured by her C&G bosses.

Later, Nate tells Annalise that Emmett’s death was ruled a heart attack, and there was allegedly no foul play. But he remains unconvinced that Tegan is innocent, and an Internet search for “Tegan Price Mexico City” brings up a 2009 photo of Tegan and Jorge Castillo at an important-looking conference.

And Nate might just be on to something: At the end of the hour, Tegan takes a seat behind her new desk, which is where Emmett used to sit as managing partner. She picks up his glasses from a corner of the desk, then scoffs, “Boy, bye,” before tossing them in the trash. 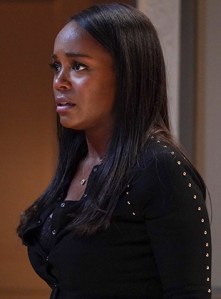 * Laurel’s whereabouts remain a mystery in this premiere, and Connor, Asher, et al. have differing theories on where she could be. Connor’s convinced that Laurel bailed of her own accord, but Frank refuses to believe it; if she chose to leave, she would have at least taken Christopher’s stuffed giraffe, which he needs to fall asleep. “She wouldn’t be that cruel,” Frank insists to Bonnie.

Later, Bonnie and Frank report Laurel’s disappearance to the cops, despite wanting to keep the authorities out of it. (They’re all getting investigated by the FBI, after all.) While the police are searching the house, Frank notices something peeking out of a framed photo of Laurel and Christopher. He swipes the picture and takes off the backing, revealing a small envelope that contains a silver key.

* After a reassuring heart-to-heart with Asher, Michaela decides to pursue her feelings for Gabriel, who’s already made it clear that he likes her and wants her. She visits Gabriel at his apartment and tells him how she feels, though she makes it clear that “if you ghost me, or lie to me, or break up with me without an actual, grown-up explanation,” she’ll cut off his manhood and “introduce it to a garbage disposal.” Yikes.

Gabriel assures Michaela that he’s in it for the long haul, so they finally sleep together — though I’m not sure how Gabriel could possibly be in the mood after that very graphic threat. But there’s something else he needs to worry about: After his hook-up with Michaela, Gabriel receives a call from his mother, and he continues the lie that he’s still studying at the University of Virginia. But Vivian knows that isn’t true… because she’s parked right outside his apartment, looking up into his bedroom.

It seems Vivian’s in it for the long haul, too. We later see her unpacking at a new apartment, and she stows away a box labeled “Dr. Sam Keating — Case 2882.” Then, she receives a concerning text from a withheld number: “Annalise is back.”

OK, your turn! What did you think of Murder’s return? Any early theories on that flash-forward? Grade the premiere in our poll below, then hit the comments!