Masked Singer fans, it looks like the cat’s outta the competition.

Wednesday’s quarterfinals episode saw the ejection of Kitty, whose sultry song selections and angelic voice were enough to get her to the Fox series’ Top 5 but not enough to sustain her to the finish. So who was in the fancy feline outfit?

Read on for a breakdown of the performances and the big unmasking. (Oh, and did you hear the show got renewed today?)

FROG | Frog continued his string of crowd-pleasing numbers with Young MC’s “Bust a Move,” during which he flawlessly executed some intricate (for this show) choreography and didn’t miss a word. His clue package focused on the fact that he has a “little frog” at home; there were also some strange visuals, including three loaves of bread and some kind of hawk. The on-stage clue gag this week was all about packages the show’s production had “borrowed” from the singers’ front porches, and Frog’s was a model jet. Given that he had an aviation-related social media snafu not that long ago (and he has a daughter), I’m still convinced that the green dude is who I think he is. (My guess: CSI: Cyber alum/rapper Shad “Bow Wow” Moss)

KITTY | Kitty took on Amy Winehouse’s “Back in Black” this week, which sounded a little breathier than it needed to be, but was still rather strong. Her video focused on the places she’s travelled to — Japan, New York City, Niagara Falls — and prominently featured a hot-air balloon. “I’m over the rainbow,” she proclaimed. Her on-stage clue: a bow and arrow. (My guess: America’s Got Talent alum Jackie Evancho) 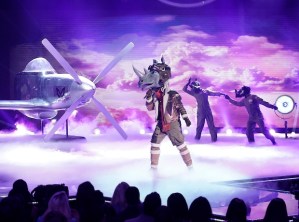 RHINO | “I’ve not heard him sing like that!” judge Nicole Scherzinger said during Rhino’s performance of The Righteous Brothers’ “You’ve Lost That Lovin’ Feelin’,” and she was right — but not in the good way. Rhino did something weird and growly with his voice in parts of the song; it wasn’t bad, but it wasn’t the usual level of greatness he usually brings to his vocals. And maybe it was the edit, but didn’t Rhino’s time on stage feel a little disjointed this week? Anyway, his clues included a sign (“Hill Ahead, 15 MPH $30 for high speed”), ballet shoes and a turkey; his on-stage clue was a naval captain’s hat, which teed up a truly epic, truly nonsensical JAG riff from judge Ken Jeong. (My guess: former Major League Baseball player Barry Zito)

NIGHT ANGEL | Lipstick, Colombia and a red light were among the hints in Night Angel’s set-up package; her performance of Donna Summer’s “Last Dance” was divine. (Smart move not to move around too much, which meant she was able to more closely focus on the vocals.) Her on-stage clue: snow boots, a ski cap and ski goggles… maybe to signify “chilly,” the judges mused, rather than “cold” or “snow”? (My guess: Real Housewives of Atlanta‘s Kandi Burruss) 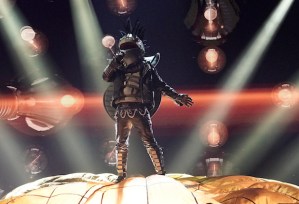 TURTLE | Turtle is really all-in on this Shellboy thing, eh? His pre-performance video capitalized on the comics riff he’s gone with all season — a Batman-like signal, saying he feels like a “superhero” — and also featured a mop, a wedding cake and poker chips. He, too, chose a stationary position during his performance of Coldplay’s “Fix You,” which was pretty good. His on-stage clue: A… dead body? A zombie? I honestly don’t know. (My guess: All My Children alum Jesse McCartney)

THE UNMASKING | Kitty was chosen to go home. When she was unmasked, she was revealed to be Evancho. (Hear what she has to say about her mature new sound and those misleading, two-tone eyes!)