You may remember The Masked Singer‘s Kitty from when she was just an opera-singing kitten — aka her second-place finish on Season 5 of America’s Got Talent, an honor she earned when she was 10 years old.

But Jackie Evancho just turned 20. And she says her run on Fox’s costumed singing competition, which ended Wednesday when she was sent home (read full episode recap here), reflected how far she’s come over the last decade.

“I was not afraid at all of these sexy, mature songs. Because, I mean, I’m 20 years old, and it’s not like I don’t know what that is!” she tells TVLine, laughing. When performing tunes like Ariana Grande’s “Dangerous Woman” or Amy Winehouse’s “Back to Black,” “I completely let go of all that Jackie Evancho is, and just sat with myself and became Kitty,” she adds. “It was nerve wracking, because anytime I’m on a stage, I automatically go to the classical-crossover girl. But then I remember I have this mask on, and no one can tell who I am, and I’m completely anonymous. And that gave me so much confidence to throw my inhibitions to the wind and go for it.”

Read on to hear more of Evancho’s thoughts on her return to the reality realm, the judge’s guess that really wowed her and those mismatched eyes on the front of her mask. 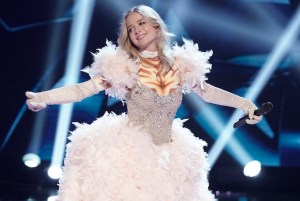 TVLINE | I’m always amazed when someone who has been on one huge reality competition chooses to go on another one. What went into the decision to go on The Masked Singer after doing America’s Got Talent?
Actually, for me, it was kind of a no-brainer. When I heard that I was offered to be on it, I was so excited, because this is a show that’s sort of a mystery to everybody — even those who take part in it. Because it’s so different from America’s Got Talent or American Idol and all those other shows. I knew it was going to be different, and it was. The process is different. People were treated really well — not to say that I wasn’t on America’s Got Talent. But insanely well on The Masked Singer. And everything was kept a secret. It was a really different experience that it was so cool to go through.

TVLINE | You made a name for yourself singing opera. Why did you want to take on new musical genres now?
I started so young — I was 10 years old when I first started my career, and my voice was not fully developed at that point — and through the years, I started learning about all these different parts of my voice, including the pop part. And it was frustrating whenever I would want to try to use it but it would be shut down because there’s a lot of my fans that don’t know me for that. And they love my opera stuff and my classical stuff. So the show really gave me an opportunity to be completely anonymous and create this blank slate for who I am and show people who that side of me is, show people my skill in other areas. It was really fun to go through that. It was really scary, too. It was like starting my whole career over again. But at the same time, it was just an exciting experience for me to go through. I grew a lot from it.

TVLINE | I thought you were Victoria Justice for quite some time. When you heard the judges guessing various names for who was in the Kitty suit, did any surprise you?
Actually, every single name that was said really surprised me [laughs] because all of them are incredibly talented musicians and artists that have done this for so long. And when they would compare my voice to them, or say that I am them, it was really fulfilling and gave me a confidence I didn’t have before. My favorite was Vanessa Hudgens, for sure.