Yes, Riverdale‘s fourth season is ending a few episodes early… but that doesn’t mean we won’t get a nice, juicy cliffhanger to chew on all summer long.

Wednesday’s “finale” (The CW, 8/7c) was just supposed to be Season 4’s 19th episode, with three more to come, but after the coronavirus pandemic shut down production, it ends up being the last episode of Season 4 — and one directed by cast member Madchen Amick, who co-stars as Betty’s mom Alice. The episode, which sees Jughead pen a revenge fantasy about the Riverdale teens fighting back against the hard-nosed Principal Honey, could’ve been an odd fit as a season ender, but luckily, “it just happened to serve as a really good cliffhanger and a season finale,” Amick tells TVLine.

Amick relished getting a chance to sit in the director’s chair, she says: “Every time I’ve read a script throughout my career, I am very visual… so just to be able to make all the decisions that bring it to life was just so exciting and invigorating.” She got plenty of support from her castmates, too, even though the episode came late in the season: “I think they really rallied their energy and, because they wanted to support me, I think they brought some good, fresh energy to their performances.” 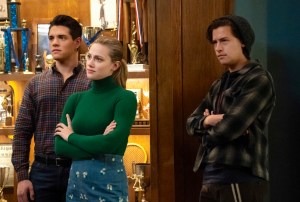 The Season 4 “finale,” aptly titled “Killing Mr. Honey,” tells two parallel stories: what’s really happening with Principal Honey at Riverdale High, and Jughead’s story, which plays out like a heightened thriller. (One that’s even more heightened than the usual Riverdale, that is.) As the director, Amick wondered, “‘How far can we take it?'” But showrunner Roberto Aguirre-Sacasa assured her that he “wanted to really blur the line between reality and fantasy and sometimes leave the audience wondering, ‘Wait a minute, is this fantasy or is this really happening?'” The fantasy sequences are in Jughead’s mind, and “he’s a very classic writer, very intellectual,” Amick notes. “So my inspiration was Citizen Kane, Alfred Hitchcock… I wanted to bring in some epic storytelling into Jughead’s writing.”

Will the cliffhanger satisfy the Riverdale fans, though? “You know what? They’re used to it at this point,” Amick says with a laugh. “Riverdale always ends with a big cliffhanger. When you leave the audience with ‘Is Jughead dead?’ as a cliffhanger, there are no boundaries to Roberto’s mind.”

Meanwhile, with the upcoming departures of Skeet Ulrich (F.P.) and Marisol Nichols (Hermione), Amick is about to become Riverdale‘s last remaining O.G. parent. “Mark [Consuelos] didn’t come on until Season 2,” she points out, “so I’m really kind of the last parent standing from Season 1. So yeah, it’s bittersweet… I’m gonna miss Skeet, I’m gonna miss Marisol.” But “I know Roberto really adores both of them,” she adds. Riverdale is “a big world, and he loves revisiting characters and storylines, so I don’t think it’s going to be the last we see of their characters.” 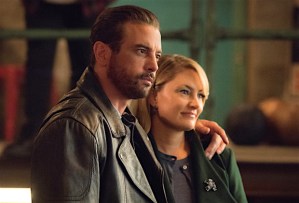 Ulrich’s departure, though, does take away Alice’s primary love interest. “I know! Poor Alice,” Amick laughs. “I sort of feel like she needs to just swear off relationships completely. She’s had some tough luck.” As for what we might see from Alice next season? “Maybe she needs to run for mayor and give Mayor Lodge a run for his money. Let’s see a woman in office! Let’s do it, guys!”