TVLine asked which plot developments you hoped still played out on-screen before your favorite shows faded to black earlier than expected. And with several series already signed off, did any of you enjoy payoff? We’ve laid out the shortened-season wishes of both readers and the TVLine staff, then taken stock of which hopes were sated… and who among us is still left hanging. (Click here for Page 1: Batwoman through The Flash.)

Grey’s Anatomy: They — and we “Mermac” shippers — have waited long enough. It’s time for Meredith to really check out the “package” that Cristina sent her by indulging in a first kiss with a clearly-smitten Cormac. –TVLine
A kiss, it seems, is still a ways away. But when an exhausted Mer turned down Cormac’s offer of a drink in the early season finale, she did make sure that he’d ask her again. 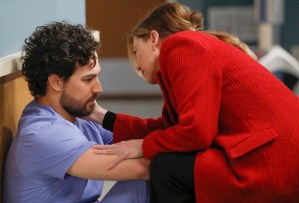 Grey’s Anatomy: I hope Andrew comes up with the correct diagnosis for Richard and it leads to a passionate love scene with Meredith. –Greys Fan
In what became the season finale, DeLuca did deduce that Richard was suffering from cobalt poisoning as a result of a years-old hip replacement. Andrew didn’t get a passionate love scene with Meredith out of it, but as his mental state continued to deteriorate, she was able to help him off the floor and out of the hospital.

Grey’s Anatomy: I hope Meredith’s last boyfriend, the Italian (why can’t I think of his name?), is right about the sex trafficking. –Rosemary
DeLuca is right that Opal is a sex trafficker; we learned that in the one episode that she and “niece” Cindy appeared in. The human-trafficking hotline also implied as much as to Bailey, who informed Meredith. But as far as we know, DeLuca was never told, “You were right after all.”

Grey’s Anatomy: I’m waiting for Andrew to figure out the diagnosis, finally get that help he needs, and then for he and Mer to reconcile. –Ari
Though DeLuca has yet to be diagnosed, much less get the help he needs, he was beginning to realize in the “finale” that he does need help — that’s at least a step in the right direction. And it was Mer to whom he reached out.

Grey’s Anatomy: It would be nice to have Amelia deliver her baby in the finale. She’s been through so much, I need to know her kid will be healthy before the huge break –Ingmar
Amelia did deliver her and Link’s healthy, as-yet-unnamed baby boy in the season finale.

New Amsterdam: Iggy’s binge eating has become concerning and alarming. Please, someone notice it and confront him so the doc can get the help he needs. –TVLine
As one of the storylines cut short by the production shutdown, you can bet it will be on the Season 3 To-Do List, per showrunner David Schulner. 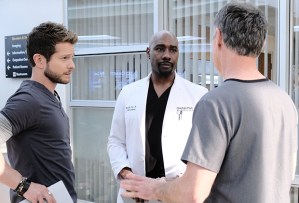 The Resident: I’d really like Cain to get his just desserts. And less important but I’d still love to see is some CoNic wedding planning — Angela
We didn’t see any wedding planning for Conrad and Nic, but Dr. Cain did get some comeuppance. In addition to the sobering death of his ex-girlfriend Justine — who died during an operation that Cain was performing on her — the cocky surgeon was likely sidelined as the face of Chastain Park after he brought a dangerous superbug into the hospital.

The Resident: Anything on the Mina/AJ front. Literally anything. I’m a ‘shipper so of course I’d love something more romantic, but honestly, I just missed their chemistry and fantastic dynamics they have in all scenes they share. –Jossy
Unfortunately, the abrupt end to Season 3 didn’t leave much hope for a Mina/AJ romance. Though Mina clearly has feelings for her colleague, AJ and new love interest Andrea were still going strong in the ersatz finale; she even met his parents for the first time.

Riverdale: Please let them graduate before the cast turns 30. –Pat
We would settle for hearing “Pomp and Circumstance” by season’s end, though with just two episodes left to air — and no sign of tassels in the final, May 8 synopsis — we should all plan to be disappointed.

Supergirl: I hope for the the end of Lena’s Non Nocere project/her return in Kara’s Superfriends team; the end of Kara’s LI storyline with William Dey; and Lex Luthor leaving. –Geraldine
Supergirl: The reveal of the anointed one (leader of Leviathan) –Tommy
Supergirl: The concept of a long con isn’t lost on us, but it’s time for Brainy to get back to his senses — and back to Nia. She’s kind of going through some things right now. –TVLine
It’s too soon to say whether we’ll meet the leader of Leviathan, how Kara and William’s relationship will develop, when Lena will reunite with her Superfriends, or if Brainy and Nia will get back together. But with Supergirl returning from a six-week hiatus on Sunday, May 3, we’ll be keeping our eyes peeled for any and all developments. 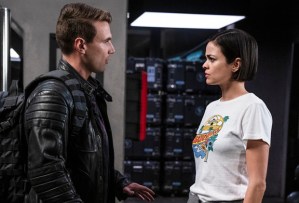 S.W.A.T.: Just when we thought that both Chris and Street (and maybe even the writers) had forgotten about the kiss that was shared late last season, boom! Chris flashed back to it. Dare we hope for one on the flip side before Season 4? –TVLine
S.W.A.T.: No to Chris and Street romantically. They are excellent as friends. Why ruin that? What I want for Chris is for the writers to stop making her so out there. She’s bisexual. Fine. If she wants to play the field, fine. I want her in a relationship with a male or a female who cares about her. –Andrea
Though Chris briefly flashed back to that her and Street’s kiss in a recent episode, she has since been focused on “settling into her own skin again” after the throuple breakup and now is seeing to it that the deputy mayor’s boozy son stops driving drunk — perhaps at her own peril. Street, meanwhile, seemed to be given food for thought when newly engaged Bonnie teased him about maybe one day needing the ring Tan lost. We’ll see what will happen with two episodes left (airing April 29 and May 20).