With the broadcast-TV season coasting to an early end, TVLine asked which plot developments you hoped still played out on-screen before your favorite shows faded to black. And with several series already signed off, did any of you enjoy payoff?

In alphabetical order below, we’ve laid out the shortened-season wishes of both readers and the TVLine staff, then taken stock of which hopes were sated… and who among us is still left hanging. We will of course update this scientific document as the seasons still playing out near their respective ends.

Batwoman: Poor Mary as of late has not-so-subtly been inviting Kate and Luke to formally bring her into the Bat-circle of Bat-trust. It’d be great to see her officially join the team sooner versus later. –TVLine
The synopsis for May 3 says, in part, that “Mary tries to prove herself to Kate.” Perhaps to be trustworthy as a new team member? 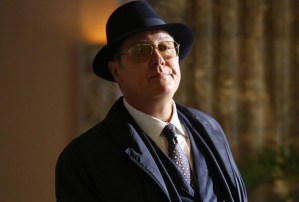 The Blacklist: This show has worn out the wonderment of Red’s past. WE ALL don’t care! Just go after evil people. Period. –Hal
Though Season 7 doesn’t wrap until May 15, Red has indeed gone back to pursuing Blacklisters of the Week now that he thinks Katarina Rostova is dead. That said, we know Katarina is very much alive, and the April 17 episode once again brought up the question of Red’s real identity.

Charmed: Abigael has been a gorgeous nuisance for the Charmed Ones all season. Now that they’ve regained the Power of Three, it’s time to put that demon out of her (and the audience’s) misery. –TVLine
Parker’s pesky sister hasn’t appeared since the April 3 episode, during which she speculated that she’d “probably be dead within the week.” Still, something tells us we haven’t seen the last of Abigael — and we’re actually OK with that. She’s really grown on us (and Mel) since we made this wish.

Chicago Fire: I am so ready for a Brett and Casey kiss. –Imzadi
Casey and Brett’s friendship continued to deepen as she came to him for support after her biological mother’s death, but the two have yet to share even a peck. (Are they bucking for a spot on this list, perhaps?) 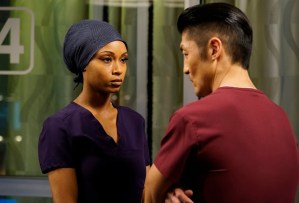 Chicago Med: I would like some kind of resolution to #Chexton, if they can work it out and communicate openly about their relationship. Get the real reason why April kissed Crockett. –Aurora
Alas, #Chexton was still in limbo as of the April 15 finale. After Ethan found himself in the middle of a dangerous hostage situation, he realized he’d made a big mistake by letting April go. But just when it looked like the exes were finally going to talk… Ethan was called away to give his witness statement.

Chicago P.D.: It would be nice to have Burgess and Ruzek dating again, even if there’s just a hint. –Ingmar
They’re not dating but there was a friendly scene in the season’s penultimate episode that hinted they’re on their way to possibly reuniting.

Dynasty: We know Fallon has a lot on her plate at the moment — between planning a wedding and tricking Liam’s son into liking her — but it’d be nice if she could also squeeze in one more fantasy musical number, preferably a mother-daughter duet with Alexis. –TVLine
Our wish is Dynasty‘s command, apparently! The CW drama’s April 17 episode featured an impromptu duet between Liz Gillies (aka Fallon) and Broadway star Laura Osnes. 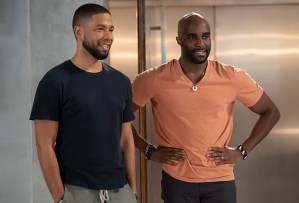 Empire: A recent episode alluded to UK transplants Jamal and Kai adopting a baby. A few more details about (and perhaps a photo of?) the new arrival would go a long way in giving us some closure to Jamal’s already-truncated arc. –TVLine
We kinda got our wish. Although the Fox drama’s final-ish episode made no mention of Jamal and Kai, showrunner Brett Mahoney provided TVLine with an exclusive update on the couple’s off screen baby pursuit in our post-swan song Q&A. (They had a boy!)

The Flash: Showrunner Eric Wallace told TVLine “the audience won’t have to wait until the end of the season” for Barry to realize his wife is a fake. But will that reveal come four whole episodes before the planned end of the season? –TVLine
The promo for the April 28 episode suggests that, coming off that rough quarrel about Joe/WITSEC, Barry will come to suspect that his “wife” isn’t his actual wife. But what will/can he do with that hunch?