Someone better call A Million Little Things‘ Katherine back and let her know: that vow-renewal she and Eddie planned definitely isn’t happening tonight.

In fact, as the final moments of the Season 2 finale hint, semi-retired rockstar Eddie may be headed for that great recording studio in the sky. After deciding not to break his sobriety despite learning some very unsettling news, Eddie called his wife to tell her how much he loved her. He said he wanted them to exchange their updated wedding vows that evening, “even if it’s just you and me.”

And then as he was crossing a street, he was hit by a car. Hard.

Both A Million Little Things showrunner DJ Nash (whose thoughts on the episode you can read here) and series star David Giuntoli aren’t saying whether or not Eddie is dead. But that didn’t stop TVLine from trying to worm it outta Giuntoli when we spoke to him Thursday. 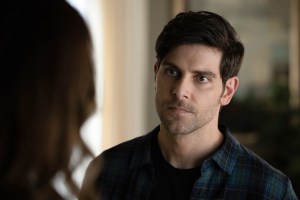 TVLINE | The news that someone on the show would die was out at the beginning of the season, so you must’ve found out before you started shooting, I’m assuming.
DJ [Nash] took me aside, gave me a decent amount of heads-up. Maybe a month prior? And he’s like, “Hey, X, Y and Z are happening at the end of this season. I want you to be the first to know.” And we had a nice little chat. But, I don’t 100 percent know what’s going to happen here. As much as fans — and you — want to know if Eddie dies, my family and my business manager need to know. [Laughs] So that’s kind of where we are.

TVLINE | When I talked with DJ, he alluded to the fact that Ron Livingston’s character died in the first episode, yet he’s been a big part of the show since then.
Correct.

TVLINE | So what can you tell me about the possibility of that kind of set-up happening for Eddie, should he be dead when we return for Season 3?
The very last meal my wife [Superman and Lois‘ Elizabeth Tulloch] and I had in a restaurant, before this whole pandemic, was taking out DJ and his wife and me just throwing on the charm, lathering it up, trying to get all the answers. His answers to me are fairly similar [as they are to you]. He’s like, “Look, Ron Livingston died in the first five minutes, and he’s an incredibly important aspect of our show.” And that’s where we are.

TVLINE | Let’s talk about what happens in the rest of the episode, where —
You hate that answer.

TVLINE | I do. But I understand the position you’re in, so I don’t hate you.
That’s good. 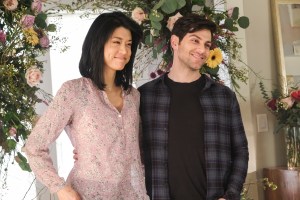 TVLINE | Eddie and Katherine are in a good spot before the episode takes us down a dark path. Why do you think he hasn’t brought her into his turmoil, which could affect their whole family?
Things have to move at the pace of drama is the real answer. I would say that what I was thinking as Eddie in those moments was that Eddie has put his wife through so much in this past year or two that before he just kind of unloads a bunch of drama onto her, he would like to know if it’s even worth it, if there’s anything there to tell her. Eddie doesn’t know what happened. He has ideas, and he’s scared that one outcome might be the reality of what happened. But he doesn’t want to lay all the nervous energy and panic at the feet of his incredibly forgiving spouse. Eddie wants to get very clear as to what happened before he burdens Katherine with any of the truth.

TVLINE | When you were reading the script for the first time and he went to the bar, did you think he would break his sobriety?
Absolutely. When I first had my first meeting after I got the role of Eddie, with DJ, we went out to eat. He kind of knew where this was all going to begin with. He was like, “Listen, I have the first few seasons — at least the big turns — mapped out, and I’ve just got to let you know, and this is how it will be for everyone: I have to make the quality of the show my priority and not making you — or any actor — happy about it. So he kind of mapped this out for me in 2018.

I was certain that Eddie was either going to do coke with Dakota or booze before the end of the season. I didn’t love it, because I don’t see the justification. There’s no justification for it. But I was really pleasantly surprised. I thought it was a really creative turn that he doesn’t. I like it much better.

TVLINE | We haven’t seen Eddie in an Alcoholics Anonymous meeting. Did you ever talk with producers about why that was?
DJ and Nina [Lopez-Corrado], our other showrunner, and I had extensive talks about Eddie’s relationship with AA, where he is in it. This season, he had mentioned possibly seeing Eddie at a couple of meetings; we didn’t do that. But what we all decided, especially in the first season, he stopped going to AA, probably around the time he started having an affair with Delilah. The support network in AA really doesn’t allow you to be dishonest, especially in a huge way like that. Eddie was probably ashamed, probably didn’t want to talk to his sponsor. The first step to falling off the wagon is living this dishonest life.

TVLINE | Oh, right.
However, could some of our guest performers have some? Sure. Do they all have Canadian accents? Yes. [Laughs]

Weigh in on whether or not you think Eddie will survive the accident via the poll below, then hit the comments with your thoughts!