If you were looking to A Million Little Things‘ Season 2 finale to provide a much-needed lift from all of the worries the world has heaped on your doorstep in the past few weeks… well, catharsis is good, too, right? 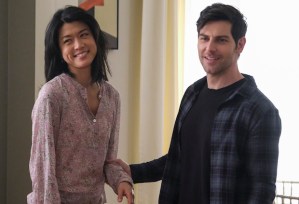 The season-ender doled out three distinct flavors of heartbreak. Rome and Regina’s adoption fell through at the absolute last minute, with Eve deciding soon after the baby’s birth that she — and not the Howards — should raise her son. Maggie finally admitted to Gary that she was still in love with him and asked him to accompany her to Oxford, but he decided to stick around Boston and try to make a go of things with Darcy.

And after becoming aware of some new evidence regarding Alex’s death, Eddie headed straight to a bar and ordered a drink. But then he had a last-minute change of heart and decided to leave, calling Katherine and telling her that he loved her and wanted to renew their vows that evening, just the two of them. As he crossed the street to return to his car, he was mowed down by another vehicle.

Read on as TVLine grills showrunner DJ Nash about whether the Friends of Jon will be down a member — and much more! — if the ABC drama returns for a potential Season 3.

IS EDDIE… DEAD-IE? | “I’m not prepared to tell you what’s going on there,” Nash says. (See what series star David Giuntoli had to say about his future at the show.) “I will say to you that Katherine and Theo’s life will never be the same,” he adds, pointing out that Eddie’s decision not to break his sobriety “was based on the fact that he doesn’t exist just for himself” and that the fallout from that moment is “obviously the big thrust and big push of Season 3.” Plus, Nash points out, “Ron Livingston’s character, Jon, dies in the cold open of the series premiere” yet has been an integral part of the show ever since. 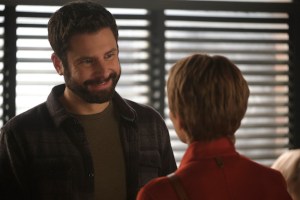 ARE GARY AND MAGGIE DONE FOR GOOD? | Though Gary initially responds with anger to Maggie’s declaration of love, he eventually races to the airport to tell her he loves her — as a good friend — before she leaves for her fellowship at Oxford. When Gary mentions that he can’t lose another friend, “It really speaks to what this group of friends has been through after Jon,” Nash says. “What he’s saying is, ‘Look, we’ve been through a ton of stuff together, but I love you, and I couldn’t have you get on that plane and leave for a year and not know that I love you.'” Note to the ‘Garcy’ fans out there: Gary ends the episode at the home of his new girlfriend, who earlier in the hour asks him to really think about what he wants.

WILL ROME AND REGINA BE ABLE TO GET THROUGH THEIR LOSS? | Rome and Regina have barely had time to hold their newborn son and to name him — they choose Jon, naturally — when the baby’s biological mother, Eve, decides that she can’t go through with the adoption. “In essence, what Regina and Rome are going through is like the death of a baby,” Nash says. “The loss of a child has the potential to threaten a marriage more than I think anything else could… I don’t know how you overcome that. Because when you see each other, you can’t help but think: ‘We used to be three.’ Even though they were three for just a minute, that was the plan.” Near the end of the hour, Regina lashes out at her husband for making her want a child when that had never been her plan. “Her comment of ‘You made me want this’ is very unfiltered,” the EP adds, “and both completely legitimate and completely unfair at the same time.”

Now it’s your turn. Grade the finale and the season as a whole via the polls below, then hit the comments with all of your thoughts and feelings!