The Good Doctor is teasing not one… not two… but three potential deaths ahead of its Season 3 finale — any one of which would shake the medical drama to its core.

In the two-part season ender, “the city of San Jose is rocked by a massive earthquake that puts the staff of St. Bonaventure Hospital on high alert as they race to assess the damage and account for the safety of their colleagues and friends.” Among those in dire straits are Drs. Neil Melendez and Aaron Glassman, who “are attending a charity event when their lives are threatened by the earthquake,” according to the official episode description for Part 1, “Hurt.”

Meanwhile, an extended promo reveals a third character in jeopardy: Shaun’s former roommate and (former?) love interest Lea. This leads him on a perilous search-and-rescue mission through a building on the verge of complete collapse.

The Good Doctor: Who Will Die? 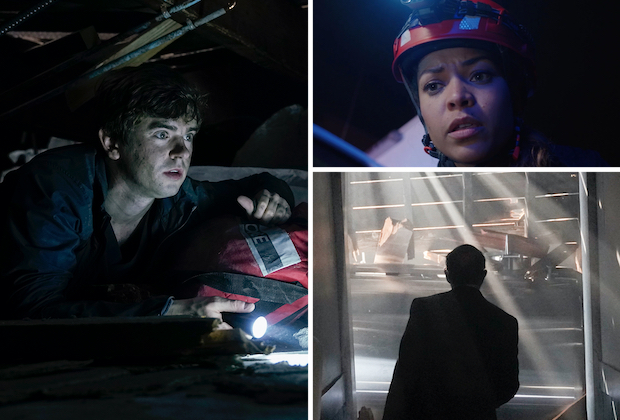 At this point, we should probably note that promos are oftentimes misleading. Just because Melendez, Glassman and Lea’s lives are said to be on the line doesn’t mean that any one of them will meet an untimely fate. There’s also the possibility that The Good Doctor will take us by surprise and kill off someone who is not referenced in promotional materials. That could mean another doctor, or one of the many injured as a result of the natural disaster that befalls San Jose.

Regardless of the outcome, ABC has made one thing abundantly clear: “Not everyone will survive.”

The Good Doctor‘s Season 3 finale airs Monday, March 23 and 30 at 10/9c. Scroll through the attached gallery to get a sense of which characters are most likely to see their lives cut short, then weigh in below.