The Good Doctor‘s Shaun doesn’t handle heartbreak well. Case in point: The surgical resident was ready to take a bat to Lea’s Gran Torino in the closing moments of Monday’s episode.

Of course, Shaun had inspiration for his sudden, out-of-character impulse. Beforehand, he and Claire treated Finn, a patient with a rare form of dwarfism who was revealed to be a bit of a philanderer. When Finn’s longtime girlfriend found out about his side piece, she took it out on his Porsche.

“I want to hurt you the way you hurt me,” Shaun told Lea. But ultimately, he couldn’t bring himself to give the classic car a beatdown. Instead, he chose to hurt Lea with his words, which allowed him to voice everything he’d been feeling since she implied that she can’t be with him because he has autism. 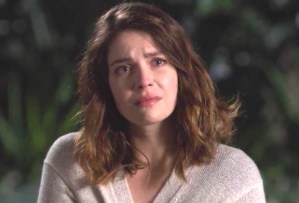 “You acted like you cared about me, but you don’t even respect me,” he wailed. “You’re flaky, and you can’t keep a boyfriend. And you can’t keep a job. And no one likes you. And you’re going to end up alone, and you deserve it, because you’re a superficial, selfish and prejudiced person!” (Hell of a performance by Freddie Highmore!)

Shaun’s decision to confront Lea came in an episode where he struggled to hold it together, and nearly got himself removed from Melendez’s team by taking out his frustrations on Claire and his boss. Melendez, who was able to empathize with Shaun, advised the resident to continue to come to work and pretend everything is fine until, eventually, he’s not pretending anymore. Finn, meanwhile, encouraged Dr. Murphy to put himself out there and meet someone new. He even tried to set the surgeon up with a nurse named Julie. Shaun and Julie eventually ran into each other at a nearby bar, but Shaun didn’t seem interested. He left to go pummel Lea’s car. 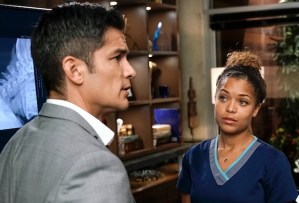 Claire also worked through her own emotions this week, which led to a realization we all saw coming. She started dating Dash, but something just… didn’t feel right. She kept her distance and held out as long she could before their first kiss. Toward the end of the episode, Melendez congratulated Claire on a job well done with Finn, and it made her feel a certain way. “Your commitment to your patients reminds me of why I got into medicine,” he said. “Being around you makes me a better surgeon… a better person.” Later, during a late-night therapy sesh, Claire admitted to herself that she’s falling in love with Melendez. 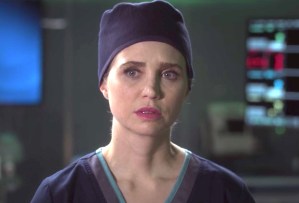 This was also a big week for Morgan, who made a decision that could end her medical career in the not-too-distant future. Her rheumatoid arthritis has worsened, and the medicine that Glassman prescribed to her hasn’t helped, not even a little. Before scrubbing in on a double amputation, Morgan revealed her RA diagnosis to Lim, then told the chief that this would be her last surgery. Soon after, though, she revealed to Glassman that she’s changed her mind. She wants to continue to pursue a surgical career, even if it cripples her. She intends to undergo synovectomy, a procedure to remove the joint linings in her fingers that would resolve her pain for up to 10 years, before every joint eventually becomes mangled and deformed. Glassman encouraged Morgan to pursue another field rather than jeopardize her future, but there was no getting through to her at this time.

What did you think of The Good Doctor Season 3, Episode 18: “Heartbreak”? And what are your hopes for the two-part finale (airing March 23 and 30)? Sound off in Comments.