“The NCAA has nothing on us,” host Nick Cannon said at the start of this week’s The Masked Singer, and yeah, that is factually accurate.

Fox’s reality singing series was shot a while back, so Cannon had no way of knowing that Episode 8 would drop in the middle of a pandemic that is forcing all of us to stay home, eat our feelings and scrub our hands like we’ve never scrubbed before. (Or maybe that’s just me?) The March Madness college basketball tournament to which he refers is cancelled. TV shows are stopped in their tracks. Restaurants and gyms sit empty.

But the Night Angel and her masked compatriots just keep on truckin’.

Read on for a breakdown of Episode 8’s performances: 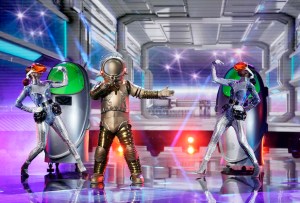 ASTRONAUT | The moon man said he would sing a song from a “dear friend,” then launched into a very strong — and quite different from his first outing — performance of Stevie Wonder’s “Signed, Sealed, Delivered.” Those soaring notes! That command of the melody! Clues from his video included: a French horn and a flag with the constellation Orion on it, plus the mention of an “organized crime family.” (My guess: Country singer/songwriter Hunter Hayes)

NIGHT ANGEL | “You just made that look so effortless and easy,” judge Nicole Scherzinger said of Big Purple’s rendition of Lady Gaga’s “Million Reasons,” and she was right: The subtle growl Night Angel has in her lower register really worked with the song she selected. And all of the veiled references to girl groups — “Destiny led me back to the stage,” “Bang bang, I left my safe place” — made me feel good about my guess. (My guess: Real Housewives of Atlanta star/songwriter Kandi Burruss)

T-REX | The dino rapped Salt-N-Pepa’s “Push It” this week, and I was quite impressed with her command of the lyrics, given how hard she bounced all over the stage. “If you dream big, your face can be anywhere,” she said at one point, between high kicks, and if you have a child under the age of 13 and/or have ever entered a Claire’s store, you know this rings true (if she’s who I think she is). (My guess: YouTube star JoJo Siwa) 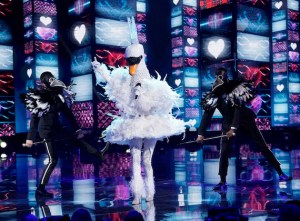 SWAN | Swan’s “I Hate Myself for Loving You” by Joan Jett and the Blackhearts was only memorable for the way it ended: with the bird proclaiming her love for judge Ken Jeong. Seriously. His face even was incorporated into the graphics broadcast on the screen behind her performance. Weird. Her video package was a whole lot of Alice in Wonderland-y weirdness — pink tea, magical fruit, moons and rainbows… you get the gist. (My guess: Truly, no clue.)

THE UNMASKING | Swan was revealed to be Bella Thorne (Shake It Up, Famous in Love), who starred in The Duff with Jeong. (Hear her discuss her post-Swan plans here!)