Swan might’ve gotten kicked off The Masked Singer this week, but don’t worry: She’s not done feathering the nest at Fox.

The elegant avian, who was revealed to be former Famous in Love star Bella Thorne, now has a deal to develop scripted and unscripted content at the network. Ahead of her ouster Wednesday (read a recap here), TVLine briefly chatted with Thorne — whose small-screen credits also include Scream and Shake It Up — about her post-Swan plans. 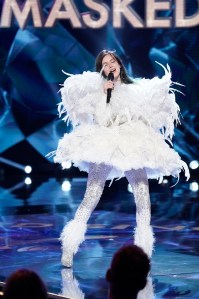 TVLINE | Talk to me about how you got involved in this madness.
I definitely watched some of the seasons and I was just really excited. Like, this is going to be the weirdest experience ever. Last season, when they had Flamingo on and everybody guessed that was me, I was f—king with fans like, “Yeah!” or “No!,” re-tweeting s–t and just starting drama. And The Masked Singer asked me to come on because of those tweets and because of the fan engagement, I guess. I was really excited when they asked me. I was like, “No f–king way. I’m gonna do what? And I’m not gonna be able to see? And I have to sing live?”

My [upcoming debut] album is all about no Auto-Tune and no this and no touch-up here and no that. People won’t believe when they hear my album that it’s no Auto-Tune. Everyone’s like, “No, that’s not true.” Hopefully they will believe it, because they’ll hear that the notes are definitely not perfect and my voice is definitely not perfect. But I was like if they get to hear my voice like this and they hear it on the album and they realize, “Oh wow, that really is her singing live without any touch-up and s—t.” And that attitude, like, “You better get it, Bella Thorne.” This is moreso to prove that point, so when you hear my voice on the show and you hear my voice on my album, you’re like, “Oh s—t: That is literally the same voice. That’s awesome. Really get it, Bella Thorne.”

You’re like, “Why does she keep saying her name?” [Laughs]

TVLINE | I was actually thinking I might have to adopt, “Get it, Kim Roots” as an internal rallying cry for tough times.
[Laughs]

TVLINE | You have a new deal with Fox to develop scripted and unscripted content. Would your unscripted ideas be anything like the insanity that is The Masked Singer?
Definitely I have come up with some treatments for [unscripted content] already. They’re not singing with masks on, but they’re definitely. They’re more family-oriented. I like to create shows from what I would understand growing up. One of the [concepts] I have is about living on a budget and how to keep your family happy when you are on a budget. Growing up, my mom… just always did a really amazing job figuring that out… She got really creative. That is definitely a main part of what the show is about. I’ve got some other nonscripted formats that are similar to my life in that sense — again, things I really agree with and related to. That’s what I want to bring them. And for my scripted side, I’ve been really thinking about a Riverdale-meets-Gossip Girl, more psychological though, and more on the nose with teens. I think that Fox taking me on, as a chance, is a huge deal.

TVLINE | Before you go, tell me about declaring your love for Ken Jeong at the end of this week’s performance. I know you two were in The Duff together.
Well, [the producers] know I worked with Ken a lot. First, they were like, “Do we have to worry about Ken recognizing you? Do we have to put extra precautions or whatnot?” I was like, “I don’t know. I have no idea. But I really want to hint that I love Ken Jeong, especially because Ken Jeong — he didn’t get a Valentine on the show, and nobody ever agrees with his guesses. I just felt bad for poor Ken.