What do Elizabeth Warren, Debbie Downer and James Bond have in common? They all popped up in some of Saturday Night Live‘s most memorable sketches this weekend — some for better… and some for worse.

It was Bond himself, Daniel Craig, who presided over Season 45’s 15th installment, and proved to be a capable, if not spectacular host who was better suited for digital shorts than he was for live sketches. The episode delivered multiple coronavirus-themed skits, but far fewer laughs than John Mulaney’s week-ago hosting stint. 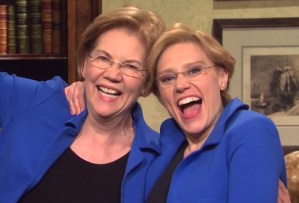 BEST: THE INGRAHAM ANGLE CORONAVIRUS COLD OPEN
Seeing Sen. Warren come face to face with SNL portrayer Kate McKinnon was easily the highlight of the night. And Warren’s crack at the expense of fellow former Democratic presidential hopeful Michael Bloomberg — “Not only did I not accept money from billionaires, I got to give one a swirly on live TV!” she exclaimed — was priceless. But even before she arrived on screen, it was one of the stronger politically tinged cold opens as of late, thanks in part to Darrell Hammond’s return as MSNBC retiree(-turned-Fox News hire?) Chris Matthews, and Cecily Strong’s uncanny impression of Jeanine Pirro. (Watch it here.)

BEST: SALAD
Aidy Bryant was equal parts “1950s housewife” and “Rachel Green making a traditional English trifle” in this bizarro short about a homemaker and one particularly revolting recipe for overnight salad. Craig was put to best use here in the role of Bryant’s fed-up husband, who scolded her for feeding their two children (and the poor family dog) such dreck.

BEST: THE SANDS OF MODESTO
This COVID-19-themed soap opera satire won me over with its many sight gags, including stock footage of two people shaking hands, and Craig covering McKinnon with Saran Wrap before getting hot and heavy.

BEST: GIRL YOU WISH YOU HADN’T STARTED A CONVERSATION WITH AT A PARTY
Who better to provide commentary on the “QDOBA Virus” than Strong’s dimwitted (and slightly tipsy) Weekend Update character? “It’s been blown so out of abortion,” she deadpanned, before giving her two cents on the race for the Democratic nomination for president. “This whole thing is ribbed for no one’s pleasure… It’s like, everyone wants socialism now, but how did that work out for Vuvuzela?”

HONORABLE MENTION: ON THE COUCH
Kenan Thompson and Chris Redd were joined by musical guest The Weeknd for their latest music video collaboration, which took a bit too long to reveal the real reason why each of them were forced to sleep on the couch, rather than in bed with their lovers.

WORST: DEBBIE DOWNER WEDDING RECEPTION
Debbie Downer’s trip to Disney World was one of the funniest SNL sketches of the early aughts, in large part because everyone, including Rachel Dratch, was unable to hold it together. Unfortunately, this surprise revival — like so many recent TV revivals — was a total dud. The timing was off, and the jokes were forced. If not the worst sketch of the night, it was certainly the most disappointing.