Once again, the former SNL scribe did away with a typical monologue in favor of a stand-up routine, which acknowledged the show’s first-ever Leap Day episode, as well as the current political climate (without explicitly referencing President Trump).

“Leap year began in the year 45 B.C. under Julius Caesar,” Mulaney said. “He started the leap year in order to correct the calendar and we still do it to this day. Another thing that happened under Julius Caesar was he was such a powerful maniac that all the senators grabbed knives and they stabbed him to death. That’d be an interesting thing if we brought that back now.” Then, after a slight pause, he added, “I asked my lawyer if I could make that joke and he said, ‘Let me call another lawyer,’ and that lawyer said yes.”

What followed was what we’ve come to expect from a Mulaney-led outing: An assortment of old-timey skits and not one, but two musical satires, including the third (and final?) installment in what can now be referred to as the “Diner Lobster” trilogy.

BEST: AIRPORT SUSHI
Mulaney enlisted two members of the Sack Lunch Bunch — Jake Gyllenhaal as Guy Who Travels in Pajamas, and musical guest David Byrne as “a baggage handler who throws your luggage into Long Island Sound” — for this terrific follow-up to “Diner Lobster” and “Bodega Bathroom.” This time around, it was an ode to airport sushi, with Kate McKinnon as Auntie Orphan Anne and Bowen Yang as a masked Asian being racially profiled amid coronavirus fears. Far and away the best sketch of the night.

BEST: SOUND OF MUSIC — ROLF AND LIES!
Mulaney and Cecily Strong led this delightfully perverse sendup of the beloved musical, which poked fun at the relationship between Liesl Von Trapp and Rolf Gruber — the latter of whom revealed himself to be much older than he initially led on during “16 Going on 17.”

BEST: CHRIS REDD ON BLACK HISTORY MONTH
First it was Ego Nwodim. Then it was Chloe Fineman. This week, it was Redd who got his chance to shine during Weekend Update. Here, the underutilized cast member discussed some of the things that have insulted black people during Black History Month, including Harriet Tubman doing “Wakanda forever” on a Visa credit card (“It looks like she got recaptured!” he remarked), and a lack of representation among the remaining Democratic candidates for presidents.

“Kamala gone! Cory Booker gone! Which means me in debate sketches gone!” Redd exclaimed. “The blackest candidate we have left is Joe ‘I Got a Black Friend’ Biden. He’s cool, but listening to that dude talk is like watching an old man parallel park his own thoughts for 20 minutes.”

BEST: THE ADMIRAL
As amusing as Mulaney was as “pass-around party bottom” Julian, the MVPs here were Kate McKinnon and Aidy Bryant, whose back-and-forth attempts to kill each other prior to the admiral’s arrival were just as funny the second time around. 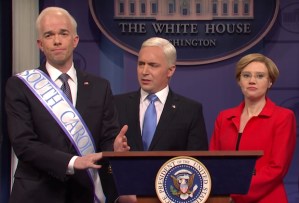 HONORABLE MENTION: CORONAVIRUS COLD OPEN
While not revolutionary, Larry David playing Bernie Sanders as, well, Larry David, continues to delight. The impression, if we can even call it that, has held up much better than Alec Baldwin’s Donald Trump. Conversely, SNL has no idea what to do with Joe Biden. Mulaney’s impression of the South Carolina primary victor felt like the show throwing up its hands and shrugging at the audience. (Watch it here.)

WORST: KYLE’S TRANSFORMATION
Justin Theroux made a fun cameo as a personal trainer in this otherwise forgettable short. While I appreciated the meta commentary on Kyle Mooney’s struggle to get airtime, I didn’t find the visual of Mooney in prosthetics to be all that funny. Conversely, seeing Colin Jost and Michael Che on the cover of a fictitious SNL magazine was funny.