J.J. Watt didn’t make it to the Super Bowl — but he did touch down in Studio 8H this weekend.

While not a natural-born comedian, the defensive end for the Houston Texans seemed genuinely delighted to be hosting Saturday Night Live. His charm made up for his lackluster delivery throughout a subpar show, which fumbled multiple sketches in the stretch between his endearing opening monologue and Weekend Update. Worst of all was when the footballer was asked to sing his way through a Disney satire.

BEST: PILOT HUNK
Watt was at his best when he was relegated to a reactionary role. Take, for instance, when he stepped into the recording booth for the next edition of the Madden video game franchise, or here, when he was (sort of) asked to play The Bachelor‘s “Pilot Pete” and leave the heavy lifting to the ladies of SNL. We’ve seen this reality-show spoof a half-dozen times, but it still managed to entertain. Among my favorite moments were when Melissa Villaseñor’s bachelorette was dragged off set with a bag over her head after she disclosed her age, and when Chloe Fineman’s character introduced her “twin sister.”

BEST: DR. ANGIE HYNES ON BLACK HISTORY MONTH
After one-and-a-half seasons as a featured player, Ego Nwodim finally got a chance to make her mark with this Update showcase. The bit itself was a tad repetitious — a professor of African-American studies uses a segment on Black History Month to call out those who were “history to me,” including a former friend that showed up to her wedding wearing all white, and an ex-coworker who AirDropped her a nude photo at work — but Nwodim’s delivery was top-notch. Here’s hoping she’s back for another desk piece before season’s end.

BEST: ROBBIE
This play on inspirational sports movies (like the similarly titled Rudy) was flipped on its head when it was revealed that Chris Redd’s eponymous footballer was not at all cut out for the big game. The twist was predictable, but Riley’s initial outburst (“F—k no! Dude f—king sucks at football!”) earned Watt his biggest laugh of the night. 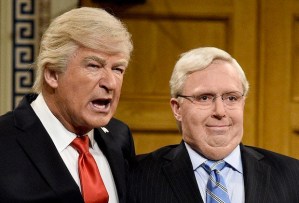 HONORABLE MENTION: IMPEACHMENT FANTASY
A clever premise, but a subpar execution. Alec Baldwin, Beck Bennett and Kate McKinnon have wrung about all they can out of their respective impersonations of President Trump, Mitch “Played America Like a Fiddle” McConnell and Lindsey “Living His Best Life” Graham, and Cecily Strong’s John Bolton was… not her most inspired work. The sketch, however, delivered the two best jokes of the night: Trump pulling a “Weinstein” when he entered the courtroom using a walker, and Kyle Mooney’s Cousin Vinny referring to Lev Parnas and Igor Fruman as “two Yutes.” (Watch the sketch here.)

WORST: FROZEN 2
This Disney bit should’ve been sacked as soon as they heard the tone-deaf Watt in rehearsals. It’s also a wonder why the show would choose to make this the post-monologue sketch, or why now was the time to do a Frozen 2 spoof, nearly three months after the film’s release.

WORST: THE TALK
Even more excruciating than having “the talk” with your parents was having to sit through this clunker, wherein Watt told his teenage son how “sometimes you’ve gotta man up and clap those cheeks.” There weren’t enough laughs to counter all the cringe.