Jennifer Lopez had the unfortunate task of following Will Ferrell’s well-received return to Saturday Night Live. To her credit, she more than held her own — even when the material wasn’t quite up to par.

The third-to-last episode of 2019 kicked off with one of the strongest cold opens in recent memory. That was followed by a joyous opening monologue about the great year that the Hustlers star has had, which culminated in an appearance by the Radio City Rockettes (and a surprising encore by that famous Versace dress.) What came after was a series of sketches that revolved around the host’s appearance. Thankfully, that premise was retired in the post-Weekend Update portion of the show, which served up multiple commercial parodies and one truly heinous sketch involving a bear suit.

BEST: THE CORPORAL
This black-and-white film parody about three sisters who compete for the affection of a visiting U.S. Army officer was the best of the episode’s “Jennifer Lopez is too beautiful to be in the same room as us normal people” sketches. Kate McKinnon and Aidy Bryant did much of the heavy lifting here (I especially appreciated their back-and-forth attempts to kill each other prior to the corporal’s arrival), but Lopez was also great as the elegant third sister that they tried (and failed) to make less attractive.

BEST: POTTYPM
Kyle Mooney put his awkward touch on this commercial parody for a contraption designed to allow you to go the bathroom without getting out of bed… unless you’re a woman. His attempts to figure out how the pee hose would attach itself to the female body (“Isn’t there, like, a flap?”) put this one over the top. 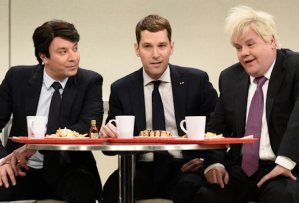 HONORABLE MENTION: NATO CAFETERIA COLD OPEN
Turning the NATO summit into the stuff of high school drama, and later a “Be Best” PSA, was quite clever, as was the casting of CBS’ James Corden as British prime minister Boris Johnson. Throw in McKinnon’s beloved Angela Merkel impression, the even more beloved Paul Rudd (as French president Emmanuel Macron), and a few jokes about that darn Peloton ad, and you’ve got yourself the best cold open of the season. (Watch it here.)

BEST: HOOPS
Lopez and Melissa Villaseñor made a great pair in this local TV ad for a mall kiosk that sells hoop earrings, a product “so luxurious they’ll turn your ears the color of money.” Funniest of all were all the random words that hung inside the hoops, like “Diabetic” and “Bucket.” (Side note: It’s a shame that Villaseñor didn’t get to pull out her J.Lo impression this weekend, because of course she has a J.Lo impression.)

WORST: WISCONSIN WOMEN
This 10-to-1 sketch — which cast Lopez, McKinnon and Cecily Strong as workers in a rural hardware store — died on the vine. Because it never quite found its rhythm (and garnered mere pity laughs throughout), the bear attack twist landed like a thud.