We’re going to go out on a limb and guess that Matt Damon and his mom never had a New York experience like the one Kevin and Rebecca encounter in Tuesday’s This Is Us.

The official synopsis for the next episode (NBC, 9/8c) simply says, “The Pearsons visit New York City,” which tracks with Rebecca’s request to Kevin at the end of the previous installment: She’d just received the news that she likely has Alzheimer’s Disease, and she urged her son, “Please don’t start treating me any differently, OK I need the fun. I need the laughs.” Then she asked to attend his upcoming movie premiere in New York City, because she’d noticed that the Good Will Hunting star sometimes brings his mother as his plus-one. (Read a full episode recap here.)

Rebecca’s wish, it seems, becomes Kevin’s command in Tuesday’s hour, which features scenes shot on-location in Manhattan. So when TVLine caught up with series star Justin Hartley at SCAD aTVfest, he gave us a quick overview of the pair’s trip to the Big Apple… and the feelings it may stir up in other members [cough Randall cough] of the Pearson family. Plus, he ominously hinted at a “dark cloud” that will color the entire outing. Read on for the scoop, as well as what the cryptic Hartley can — and can’t — say about what we saw in the latest flash-forward.

TVLINE | Where in New York did you guys shoot?
Radio City [Music Hall]. We shot in Central Park. We shot at  the Plaza [Hotel]. Where else did we shoot? Oh my God, we shot in the Met[ropolitan Museum of Art]. They let us into the Met after it closed. I’m like, “We’re at the Met. We’re alone. This is crazy.”

TVLINE | Didn’t Kevin have a line in the show about how when you’re famous you can do things other people can’t do?
Yeah. Sometimes it’s true. 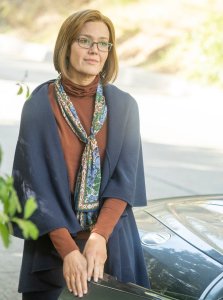 TVLINE | It sounds like this is a big weekend for Kevin and his mom.
It is. They have a good weekend. There’s this pressing event that’s happening that’s sort of time-sensitive, kind of casts a shadow or a dark cloud over the weekend. So that’s where the drama happens.

TVLINE | Pressing for both of them?
Yeah, for everyone. For everyone.

TVLINE | Kevin has a pretty sweet house in the future. It looks like there are some awards and things in the flash-forward.
It looked like that, didn’t it? Hmm. Interesting.

TVLINE | Are there trophies of any sort?
There are, and we’ll tell that story, as well. It’ll be addressed.

TVLINE | When Kevin brings the bag of food into the house, should we be looking closely at the logo on the bag? Might that have a hidden meaning?
I don’t think so. I think it was just nondescript. I could be wrong, though. If it’s something, I don’t know what it is.

TVLINE | Randall’s very angry in the episode that Randall is very angry that Kevin is the one escorting Rebecca to get her MRI results. He addresses it a bit in therapy, but will Kevin get a sense of that anger?
Yeah.

TVLINE | How might he react?
Look, it’s a thing. It’s a definite thing between the two of them. It’s not good. It’s good drama, but it’s not a good situation.