Three hard-to-handle events transpire in this week’s This Is Us: Randall enters therapy, Rebecca gets an official diagnosis for her declining mental state, and Madison gives some sound relationship advice.

Of the trio of developments, I’m the most shaken by Madison’s sudden conversion into someone with good ideas.* When the heck did that happen? Is it some magical byproduct of her tryst with Kevin? And while we’re on the topic of byproducts of trysts with Kevin, I’ll say it again: She’s totally going to turn out to be his preggo fiancé, isn’t she?

Read on for the highlights of “Clouds.” (And make sure to see what Sterling K. Brown had to say about Randall’s first time at therapy here.)

* Of course I’m kidding, but it’s gallows humor: Rebecca’s diagnosis is one of the worst things a human can hear, and it makes me so sad to even contemplate the suffering she and her family have ahead of them. Anyone else need a hug?

MAKING THE GRADE | In a flashback to when The Big Three were preteens, it’s Report Card Day. Kate is bumming because her first boyfriend just broke up with her. Randall is obsessing about an A-minus. (“I’m putting too much time into Mathletes and not enough time into actual math,” he laments.) And Kevin’s grades are dismal — except for phys ed and art — and he’s not bothered; instead, he tells Rebecca to cough up a promised $5 for each A so he can buy baseball cards.

She reluctantly does, then allows him to tag along on her errands, but all he does is complain. “I wish you were more like Sophie’s mom. She’s fun,” he grouses, causing Rebecca to counter that she is too a “fun mom.” But the biggest evidence that she is not, indeed, a fun mom is that she allows him to shame her into taking him to the baseball-card store. There, he spends his newly acquired dough on the remnants of a box of cards, in search of a specific card that will complete his collection: John Candelaria of the Toronto Blue Jays. He and Rebecca tear through a bunch of packs and finally find the card in question, then celebrate.

Meanwhile, Jack and Rebecca disagree on Randall: She thinks his anxiety (though that’s not what they’re calling it) is getting worse, but Jack says their son just needs to blow off steam. So he takes the kid to the track and introduces him to running, aka something he can do “until that worried feeling in the pit of your stomach goes away.” (Side note: I kind of love how Jack just laces up his sneakers while wearing his work pants and that sweater vest.) They do some laps around the oval.

Later, at home, Kate takes a break from moping after her breakup to listen to a sage, breakfast-related metaphor about her nascent love life: “First boyfriends are kind of like first waffles,” Jack explains after reminding her how he often has to toss the first couple every time he fires up the iron. “You have to kind of get through a few until you get it right.” 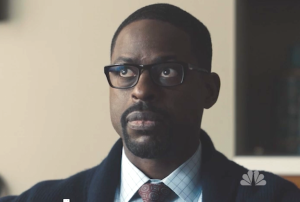 ANALYZE THIS | In the present, at home in Philadelphia, Beth notes that Randall isn’t as chill as she thought he might be after a weekend at the cabin with his siblings. (Side note: She has been around when the three of them spend more than five minutes together, yes?) But the councilman is preoccupied: Rebecca is getting her MRI results in California that afternoon, and he’s got his first therapy appointment that day. Beth is proud. “This is a big step,” she beams, but he says it’s not a big deal.

When Randall arrives at his therapist’s office for the first time, he’s irked that there are no cups at the water cooler. He doesn’t like the art she’s chosen to hang on her walls. And he can’t stand that her coffee maker keeps hissing when drops of the brew hit the sizzling hotplate. He’s anxious and nervous in a way that we haven’t seen very often, but he pulls out all the Randall stops in order to try to control the situation. He dad-jokes. (“So how we doing this, Doc? Is it Good Will Hunting or The Sopranos?”) He downplays his condition, noting that “maybe once every decade things get too overwhelming.” He’s very specific that he’s looking for some coping mechanisms and then he’ll be outta her hair.

The scene is shot from the therapist’s point of view, so we hear — but do not see — her. When Randall launches into his origin story, she cuts him off and mentions that she’s heard his political speeches and knows about his adoption and the fact that he’s a public servant. This makes Randall combative (“It’s like you Googled me,” he says, jaw tight. “Isn’t that against the rules?”) When she asks about his relationship with his mother, things get really rough: Randall angrily says therapy is a “waste of time” and asserts that the entire Pearson family would’ve fallen apart years ago without him. “Would they?” the doctor wonders… and that’s it: Randall storms out, shutting off the offending coffeemaker in his exit.

Back at home, Randall informs Beth that he’s done with introspection, thank you very much. “I know you think I need this,” he starts, but she cuts him off: “Babe, I need this.” She goes on to explain that she’s been carrying pepper spray and taking sleeping pills to make herself feel better after the break-in, but she didn’t share that with him “because I was worried if I laid anything else on you, you were gonna crack.” And unless he gets the help he needs, she can’t tell him what’s really going on in her mind.

The next time we see Randall, he’s back at therapy. (Oh, by the way: That’s Better Things‘ Pamela Adlon playing his therapist.) 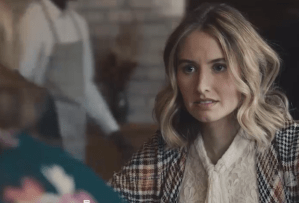 ROCKSTAR JACK IS BACK! | When Kate and Toby finally have a chance to talk after she returns from the cabin, he apologizes for everything he said and calls his weekend with Jack “a godsend.” And in typical Pearson- and Pearson-adjacent fashion, he attempts to make up for his idiocy with a gigantic gesture. This time, it’s making the shed behind the house into a recording studio for Kate… well, mocking it up to look like one, with cardboard boxes standing in for speakers and such. He explains that he’ll replace the fake equipment with real stuff, but Kate interrupts: She appreciates the gesture, but she’s going to need more time to be OK with everything that’s happened.

Just then, Madison texts: She wants to get together for a “Sorry I Shtupped Your Brother” brunch. The meal starts off chilly, but Madison’s earnest apology (and her vows to “Kill Bill” Toby, LadyKryptonite and anyone else who hurt Kate) eventually thaws Kate’s iciness. Madison also plays a thoughtful devil’s advocate when it comes to Kate’s current marital strife: Maybe the music-studio gesture isn’t empty, she suggests, because “is it possible he just took whatever you said to heart?” Madison adds that part of her hook-up with Kevin happened because she feels very comfortable around him; he’s seen her when she’s not at her best. Similarly, “Shouldn’t Toby be able to express his deepest fears without punishment?” Mads asks. “Isn’t that what marriage is?” (Don’t worry: She also spends some time referencing something Kev did to her that had her “literally upside down at one point,” so she hasn’t completely changed.)

Back at home, Kate tells Toby, “I love you, and I’m tired of the me-versus-you.” She asks him to show her the studio again, and is delighted when he points out an area she hadn’t seen before: a mini-music area, aka a “playroom devoted to sound,” for Jack. She happily thanks him. And at the end of the episode, we see a montage of Jack growing up in the studio, which eventually is where he gets his songwriting start. 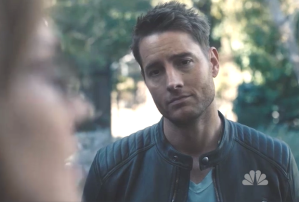 THE BAD NEWS | Rebecca passes the time before getting her MRI results by going to a record store with Kevin. While listening to Joni Mitchell’s Clouds album, she remembers when she and Jack unsuccessfully tried to find Mitchell’s old house during their trip west back in the day. One query to Siri is all it takes to find the location now, so Mama Pearson and her son make their way out there. She tells him the story of how Graham Nash wrote “Our House” about a day he and Joni spent at the market and then at home. And because the self-named Carpe Diem Rebecca wants to live in the moment, she tries to talk Kevin into helping her skip her upcoming doctor’s appointment. But he gently says no, and pretty soon they’re sitting with Miguel while the doc gives them the bad news: Rebecca’s mild cognitive impairment likely is due to Alzheimer’s Disease.

Afterward, Rebecca asks Kevin not to treat her any diffrently. “I need the fun. I need the laughs,” she says, adding that she wants to go to the premiere of his movie.

Kevin swings by a baseball card store later that day, spends $2 on the Candelaria card he’d sought when he was a teenager, then slips it into his wallet.