If it seemed like This Is Us‘ Randall was spoiling for a fight the moment he sat down in his therapist’s office Tuesday, series star Sterling K. Brown says, well, he was.

This week’s episode spent a significant amount of time on how the city councilman did not want to address his anxiety, his feelings about Rebecca’s deteriorating memory or his slipping sense of control — and how minuscule details like his new therapist’s coffeemaker or her questionable taste in artwork nearly sent an agitated Randall over the edge. (Read a full recap here.)

Eventually, after Beth made it clear how much her husband’s emotional unease was affecting their marriage and family, Randall gave psychoanalysis another shot. But oof, what a painful way to get there! TVLine got series star Sterling K. Brown on the phone to give us the lowdown on Randall’s uncomfortable attempt at introspection and to hint at why an upcoming installment “may be one of my favorite episodes we’ve shot in the past four years.”

TVLINE | This is Randall at a new, anxious level, when he first walks into that office.
Yes, it is.

TVLINE | We’ve talked before about how he often thinks he’s the smartest person in the room. Does he think he’s smarter than his therapist?
Absolutely. I think he’s already, fairly or unfairly — probably unfairly — judged what he thought he was going to be receiving in terms of treatment. The fact that she didn’t have cups for the water cooler, that crappy painting in his mind that she has on the wall, the fact that she can’t turn off the dadgum coffee machine. You know what? Have things together. Present yourself in such a way that the little things matter. Because she didn’t take care of those things, he had written her off from the beginning.

TVLINE | It seems like he’s looking for a reason to get mad and leave.
Yes. Yes.

TVLINE | We run into that the most when she says she already knows who he is. Why do you think that, in particular, sets him off?
Two parts. There’s the assumption that there’s a blank slate, so you get the chance to present yourself to people the way that you want to. And the idea that someone has information on him that he didn’t expect means that he can no longer pretend to be something different. Also the fact that she didn’t share that information at the very beginning, he found a little upsetting, that she held that card close to her vest. But I think when you’re not looking to be your authentic self and you want to have the option of presenting the self that you want to be seen as, when somebody has inside information, that sort of debunks that attempt. 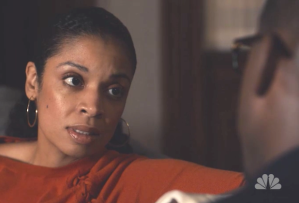 TVLINE | The idea that the family might not fall apart without Randall taking care of everything brings him up short. Do you think he’d ever considered that possibility before?
No. [Laughs] I don’t. I think he fully expects that if he did not assume the level of responsibility he had after the passing of his dad, that things could have gone a very different way for his family, and that that different way would not be as positive as the way things have played themselves out thusly. I think he feels that sincerely, and I don’t think he feels it in an egomaniacal sort of way. He’s like, “Somebody has to step up. My sister is reeling from the loss of my dad, my brother took off to go become an actor. Somebody has to keep it together. And while I could’ve gone off and had a completely different like, possibly, I decided to stay home. I decided to come back every weekend to make sure things were good. I decided to teach my mom how to use a computer program so that she could be hirable to take on her new job. I did those things, and I’m not necessarily looking for credit from them, from external forces, but dadgum it, I did it. And nobody else did.”

TVLINE | He goes back to the therapist’s office for Beth’s sake, when he might not have gone back for his own. That’s very sweet, but also a little sad.
There’s a recognition at the end that his mental health doesn’t just affect him. That was the way that he was thinking about it before. Because if I go run, I can take care of myself and I’m “fine.” But the way that I’m navigating this world necessarily impacts the people that I love, my ride-or-die, my partner. And when she says that “I am afraid to share the things that are going on with me, in my life because I don’t know if you can take it,” then he says, “OK. Let me take a step back. Reevaluate for the sake and sanctity of my marriage. It’s not about me anymore. It’s about us.” 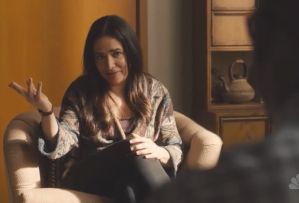 TVLINE | You get to play with Pamela Adlon now for a while. You’ve said this therapy storyline influences the last four episodes of the season.
Yeah. I love that woman so much. We first got to meet a few years ago when we were both nominated for Emmys… and just hit it off. When you meet a real human being — not just an artist whose work you appreciate to the highest level, but someone who is authentically themselves? Like, nobody is realer than Miss Pamela. I told her before, I said, “How did Dan [Fogelman, series creator] get you to do this?” This woman is running her own show, she writes every episode, she directs every episode, she produces it. I was like, “How did he do this?” She was like, “I have no idea.” But I think it’s because there’s real love for one another, and then we got to play with each other. That may have been the straw that broke her camel’s back and say, “OK, this may be something worth doing.”

We had a great time. You’ll see her again in Episode 17. I haven’t seen it yet — I’ll be honest with you — but I think it may be one of my favorite episodes we’ve shot in the past four years.