This Is Us‘ Randall better get used to answer this question: “And how does that make you feel…?”

As hinted at in a recent promo for Tuesday’s installment of the NBC drama (9/8c), City Councilman Pearson is about to embark on a much-needed foray into therapy — not that he really wants to.

Randall sits down in his therapist’s office “with reluctance,” Sterling K. Brown previews, nothing that his character’s aversion to seeking help traces back to his earliest male role model. “Jack was a pretty self-reliant guy,” Brown tells TVLine, “very quiet, close-to-the-vest, and he probably didn’t share as much with his wife as Randall shares with his.”

While young Randall might not have understood the nuances — both good and bad — regarding the way his dad handled pressure, Brown notes that Randall did take to heart that Jack “was someone who took care of things on his own.” 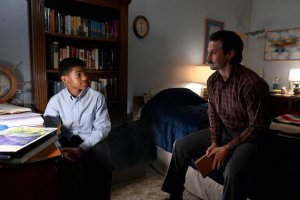 Add in that Papa Pearson hid some major segments of his earlier life — his harrowing experiences in the Vietnam War, for example, as well as pretty much every detail regarding his younger brother, Nicky — and Brown says he can see how Randall’s journey might eventually parallel his dad’s.

“I’m heading down a path which is similar to the path of my father’s, and while I love my father, I know that there’s a better path,” he says, speaking in character. “So after that trip to the cabin, there is a decision to ultimately go to therapy.”

Citing spoilers, Brown wasn’t able to give us a feel for how Randall’s introspective journey would play out. But he did say that — much like in real-life — it won’t be a quick-hit thing.

“You’ll see how that plays out over the last four episodes of the season,” he adds.