Warning: The following contains spoilers for Thursday’s Alex-centric episode of Grey’s Anatomy. If you’d prefer to watch first, read later, scrub out (and get the tissues).

From the start, the deck was stacked against Thursday’s pivotal episode of Grey’s Anatomy. How, we wondered, could the show possibly craft a satisfying send-off for original cast member Justin Chambers’ Alex Karev when it didn’t have the actor on board to play it? Could it even be done without scenes in which we saw the beloved doctor say goodbye to his bride, Jo, and his person, Meredith? Well, now we have our answer — the ABC drama could try with voiceovers. Voiceovers galore, as a matter of fact. But before you grade Alex’s flashback-filled sendoff in the poll below, let’s review the revelations — and the show’s version of our Best of Karev countdown — of “Leave a Light On.” 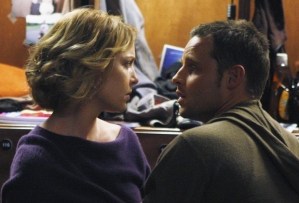 ‘SHE HAD OUR KIDS’ | As the hour began, we flashed all the way back to Season 1 of Grey’s — and that was just the first of a zillion OMG TBT moments in the episode. In the present, Richard tossed a letter from Alex into the trash at an AA meeting. Link delivered a bundle of mail to Jo — including a missive from her missing husband. Miranda received a letter, and so did Mer — from “Evil Spawn.” In voiceover, we heard from Karev that he wouldn’t be returning and was, in fact, already gone. “This is not the way I wanted to do this,” he wrote to his person. “But you know me — any chance to take the easy way out.” He couldn’t come back to Seattle, he continued, because if he did, Grey would yell at him and screw his head back on straight. And “the one perfect thing isn’t [there] — not anymore.” His departure wasn’t about work or Mer or Jo… He was with Izzie now! What?!? (His wife might argue that that had something to do with her.)

Alex went on to say that he couldn’t come home because it wasn’t home anymore. He’d reached out to Izzie when he’d been gathering letters to help Mer keep her medical license. Really, though, he’d been looking for an excuse to contact his old flame “to see where she landed.” (Cue the Alex/Izzie flashbacks.) When she had picked up the phone, he’d heard kids in the background — his kids, she eventually admitted. Eli and Alexis. “I should’ve told Jo or told you,” he said. But instead, he’d gone to Kansas and met the 5-year-olds, who’d loved him at once and asked if they could call him Dad. “Now I live on a freaking farm in Nowhere, Kansas.” Izzie was doing great, he reported, and he couldn’t even be mad that she’d had their children without telling him. He loved them and loved being able to let them wake up with two parents when he’d so rarely awakened to one. “You always said Cristina was your person, then I was your person,” he told Mer. “But you’ve never needed anyone but you.” She was welcome to drag him back to Seattle; however, he’d prefer that she just visit and let the moppets call her Auntie Mer. Until then, “try not to hate me too much.” 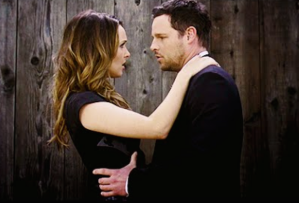 ‘I LOVE YOU, JO’ | As Jo read her letter, Alex admitted in voiceover that she deserved more than words on paper. “This cowardice, this letter… it’s officially the worst thing I’ve ever done.” After insisting that he loved Jo, he acknowledged that it probably wasn’t fair for him to say that since he also loved Izzie. And when he’d reconnected with her, “it felt like no time had passed.” And he could’ve turned away from that, if it had just been a case of him missing her. She’d had his kids. “I need to give these kids the family you and I never had,” he told Jo. (Cut to a shot of the kids climbing into bed with a Chambers body double.) “When I told you I loved you, I meant it, but Izzie has our kids.” And given the chance to be their father, he had to take it. “I wish getting everything I ever wanted didn’t have to hurt you in the process. Maybe ‘I love you’ is the wrong thing to say” — maybe “thank you” was right, Alex suggested. Anyway, he had already seen a lawyer and had left Jo the whole kit and caboodle, including his shares of Grey Sloan. “You deserve everything good in this life, Jo. I hope you find so much better than me. I’m sorry. I don’t know how to end this. I don’t want to,” he concluded. “Goodbye.” 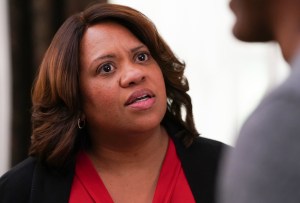 ‘I’M JUST WRITING TO SAY GOODBYE… AND THANKS’ | In his letter to Bailey, Alex acknowledged that they hadn’t liked one another very much in the beginning. He thought she’d decided he was garbage, like all his other teachers before her. But unlike them, she’d let him grow up. So “it would’ve been pretty great if I’d just stayed there and repaid you for everything,” he said. They both knew, though, that that wasn’t possible. “It took me a long time to say it, but I’m a good peds surgeon. You kicked my ass and asked more of me than anyone” — and hired people who did the same (hi, Arizona!). He’d even become the person Bailey trusted to run the hospital. Now he had a chance to be chief at Shawnee Hospital (though he wasn’t about to ask her to recommend him just then). He knew that the fact that he now had two kids with Izzie was probably making Bailey’s head explode, and since they wanted pizza sushi, which isn’t a thing, he was going to cut his letter short, saying merely goodbye and thank you… and “I love you, Dr. Bailey.” 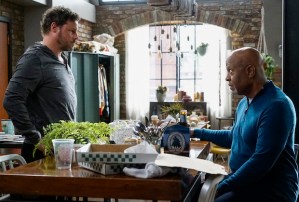 ‘SEE ONE, DO ONE, TEACH ONE’ | At his AA meeting, Richard began by discussing his love of being a doctor — and his love of his students. That day, he went on, he’d received a letter from a former one, and not the one he would’ve put money on to succeed. Instead of continue to work with the best of the best, this student — Alex — had chosen to give it all up for the woman he says he loves and their children. Richard wanted to yell at him — he’d been where Alex was, in love with two people at the same time. “But I missed my own chance to watch my own child grow into an adult… so I guess I just wanted to say goodbye.” Instead, Richard was left with a note and an apology. “I’ve seen people leave… I’ve done the leaving… Lately, it seems like all the people I love disappear, and I can’t find a way to make it stop” — any more than he could make his hand stop shaking. (Argh. How many times is this episode gonna make me cry? It’s freaking hard to recap misty-eyed!)

‘I AM DOWN… FOR ALL OF IT’ | As the episode neared its conclusion, we flashed back to a scene in which Jo encouraged Alex to check on Izzie if he was curious about how she was doing. Instead of do so, he told Jo what he imagined Izzie’s wonderful life was like. “When I picture her, she’s always smiling,” he said. “She’s as happy as I am with you.” From there, we flashed even further back to revisit Alex and Izzie’s romance in such a way that the show made a pretty compelling case for them being together. From there, we cut back to Bailey and Ben’s house in the present. She reported to her husband that Alex had left his wife, job, everything, and was raising a family with Izzie. He’d also be chief of Shawnee soon if the hospital took her advice. (Aw, she was going to recommend him.) What does this have to do with Joey? Ben asked. Alex survived his awful upbringing by luck, by chance, Bailey replied. “Joey’s future shouldn’t be a matter of chance.” OK, Ben said. He’d wanted to talk about taking in the boy, but his answer was nonetheless OK. Joey should have a family. “But that family should learn to talk together first.” With that, Bailey apologized. “Congratulations, Miranda,” smiled Ben. “It’s a boy.” At Grey Sloan, Jo told Link he could quit hovering. He wasn’t hovering, he was just deciding whether to take her day-drinking. Before he could, she got a page to go to work. “You’re my hero,” he said. “Mine, too,” she replied. At Mer’s, Zola told her mom that she was supposed to show Alex her science project when she was done. So could they? Erm… no, Grey began to explain.

So, what did you think of the way Grey’s handled Chambers’ departure and Alex’s exit? Weigh in in the poll below, then hit the comments with your critiques.