We’ve noted before how This Is Us‘ Kate is the Pearson sibling most in need of a win — and that held true in Tuesday’s episode, which found present-day Kate worrying that her marriage was going to end and flashback Kate experiencing emotional abuse at the hands of her first boyfriend.

“I always joke that I have super-healthy tear ducts at this point,” says Hannah Zeile, chuckling. Zeile plays Kate as a young adult, which means she’s the one charged with playing Kevin and Randall’s sister as she makes her way through the grief following Jack’s unforeseen death. And now she’ll maneuver the character through the painful realization that Marc’s treatment of her isn’t love — it’s control.

Read on for Zeile’s thoughts on Kate’s current predicament, starting with that Episode 13 fight in the car.

TVLINE | Talk to me about shooting that argument with Austin Abrams.
Oh my God. [Laughs] 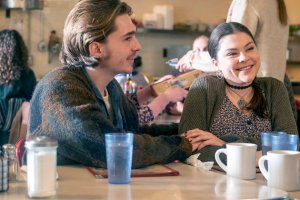 TVLINE | I know Justin Hartley was directing this episode. And there’s a huge amount of emotional ground that needs to be covered in a very short period of time in that scene. Did you all talk a lot about how that would go?
Yeah. First of all Justin Hartley was incredible to work with. I think it’s so cool to work with an actor as a director, and most specifically an actor that actually performs on the same show. So he knew exactly what he was looking for and gave incredible notes and really helped us get into the frame of mind that we needed to be in for each scene. SoI have nothing but positive things to say about Justin.

And Austin, as well, is extremely talented. He really is one of those actors that becomes the character while they’re working, so I think that he felt so closely to Marc in the sense that he thought like him and he felt like him and he moved like him. It didn’t feel like performing. We’d only been working on this for however long, but it felt like we had this established relationship with Kate and Marc, and I think that that just shows a lot about Marc’s temperament as a character. A lot of the scenes that they have, it feels like zero to a hundred. As Justin said, Marc goes, it goes from the sweetest moment we’ve probably ever seen — they’re singing, they’re laughing, they’re having the greatest time — to, like, actual hell. And [that’s how] Marc is as a person. He just is very hot and cold and then he stops and then becomes manipulative because he realized he’d snapped and uses that to reel Kate back in.

So yeah, so filming that was a lot of high emotion. We were sweating and panting and deep breathing. It’s weird when you know you’re acting, but your body is still doing the physical motions, so you still need a second to like recover from what just happened.

TVLINE | At the very end of that argument when he drives off, there’s that kill shot where he comments on not being able to look at her “fat face.” We saw him make the comment about the chocolate earlier in the episode, but do you think she ever thought he’d be capable of saying something so hurtful to her?
No. I think that the writers have done a great job of making Marc have like redeemable qualities, because not all people are walking around like supervillain outfit on, you know? Some people, they do have redeemable qualities, but they still have toxic ones, as well. So I do think that she was just so enthralled with having someone even be attracted to her, and that’s more of her own insecurity. I’m sure that Kate could, as we see with Toby, she could find a good guy. But she feels so down about herself that she thinks, “Wow, I’m so lucky to have someone like Marc even look at me.” So she’s excusing all this horrible behavior just because she wants this to work out so badly, because at this moment, she thinks this is like her only shot at love. 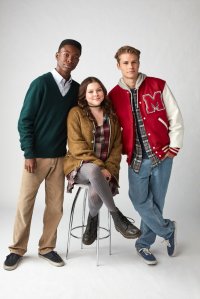 TVLINE | You shoot a lot with Logan Shroyer and Niles Finch, who play Kevin and Randall as young adults. What’s the dynamic like among the three of you?
It’s a huge blessing that they are actually two of my closest friends, as well, and I mean that genuinely… Logan is a little more Method. He stays in character a little more. They’re just different types of people in the way that they do their job. Niles and I will be totally joking and laughing and goofing around right before they yell “Action!,” and then we just go straight into it.
But those are the fun days when the Teen Three all get to work together. We have a lot of fun and we always pow wow in my trailer and eat lunch together and just, we have a good time.

TVLINE | Is that what they call you guys on set? The Teen Three?
Yeah. We kind of made it Teen Three, because for a while it was like there’s Big Three and Little Three. Some people were saying Medium Three, and we were like, “I don’t know if we want to be the Medium Three. I don’t know about that.” So we’re the Teen Three.