This Is Us wouldn’t be This Is Us if it didn’t love throwing its characters into everyday situations that suddenly veer into heartache. A congratulatory goodie basket becomes a test of will for recovering alcoholic Kevin. A simple trip to a rec center reminds Randall that he’s never truly felt like a part of any community.

And something as mundane as blowing out birthday candles is enough to send Kate spiraling into an existential crisis — as evidenced at the start of this season by her lament about her inability to get pregnant again.

“It’s like this black cloud follows me around and every time I get away from it, it catches up to me. I’m so tired. I’m tired of smiling and pretending that it’s sunny out,” she says. “When is the universe going to give me a damn break?” 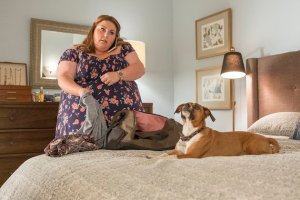 Kate, girl, we hear you.

Look, if the past two seasons have taught us anything, it’s that life is a struggle for anyone with even a molecule of Pearson DNA banging around inside them. But while Randall and Kevin definitely have had their trials, they’ve also had significant wins sprinkled throughout Seasons 1 and 2.

This season, Randall has new purpose in renovating his late father’s crumbling apartment building, and he hasn’t stopped beaming over Deja’s decision to become his and Beth’s adopted daughter. Kevin fought his way to a good place with his addictions, shot a Ron Howard movie and has both a sexy new romance with Zoe and a feature film hitting theaters.

Kate? Granted, she got married (yay!). But there’s also been the miscarriage (sniff), and the infertility (ouch), and her mom’s initial disapproval of the in-vitro fertilization process (c’mon!), not to mention her going-nowhere music career (oh right) or the lack of any career, really (harsh but true).

The woman needs a win, is what we’re saying.

Thing is, she had one — and recently! — but it was treated as an afterthought rather than the monumental event that it was. Kate has lost 40 lbs., which she noted she’d done “slow and steady, no fad diets, no pills, no slip-ups.” I don’t care who you are: A 40-lb. weight loss for someone who’s felt “trapped in this body for so long” is a huge accomplishment.

Does the character have a ways to go before she feels comfortable in her own skin? Sure. But it would’ve been great to see the show give her a moment — even a fleeting one — of triumph rather than have the revelation be a glossed-over footnote in her infertility saga.

Plus, we know that life for Toby and Kate soon will get even harder; a flash-forward at the end of Season 2 showed us that Toby will become incapacitated by his depression in the not-so-far-off future. Is it too much to hope that maybe the IVF will take and they’ll be able to start a family, with an healthy kid arriving at the end of an uneventful pregnancy, before then?

Because Kate needs a win. Now.