Though This Is Us‘ Season 2 finale was ostensibly about Kate and Toby’s nuptials, chances are that the final few moments — and the quote above, uttered by Future Randall — will be what viewers obsess over during the summer hiatus.

The tearjerker drama wrapped its sophomore season Tuesday with an episode that juxtaposed Randall’s speech at his sister’s wedding reception with glances at the future for several of the Pearsons. In the flash-forwards, Kevin traveled to Vietnam with his new girlfriend/Beth’s cousin (more on that in a moment), Toby appeared to be in the grips of a debilitating depressive episode, and Randall and adult Tess — first glimpsed in the post-Super Bowl episode — had a grim interlude in which Randall and his daughter somberly discussed how neither was ready to visit a woman only referred to as “her.”

Is this more fodder for the “Beth is going to die” theorists? Also: Is Cousin Zoe Kev’s true love? And what, if anything, happened to send Toby into a tailspin? We took those questions straight to co-showrunner Elizabeth Berger, who gave us plenty of insight on the finale and what’s ahead in Season 3.

But first, a quick recap: 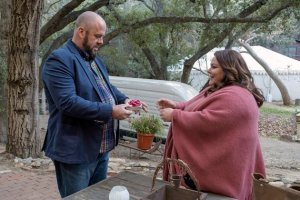 * The episode opens on what we’re led to think is Kate and Toby’s wedding ceremony but what turns out to be a recurring dream Kate is having: Rebecca and Jack renewing their vows at the cabin on their 40th anniversary. (Hence the elderly Jack we saw in the promos.) Snippets of the sweet renewal and reception are woven throughout the episode.

* Kate has a bit of a freakout when she realizes that her “something old” — which she intended to be Jack’s Daytona t-shirt — never made its way into her suitcase. While wedding planners Kevin and Randall go into overdrive to find her something, she leaves to do an errand that winds up taking all day, making her brothers and mom worry that she was pulling a Runaway Bride. But she’s really just taking her time coming to the realization that she doesn’t need to hold onto Jack’s memory quite as strongly as she has been. So she spreads his ashes by the tree stump she and he sat on during a childhood vacation, then comes back to the cabin, where the wedding goes off without a hitch.

* Prior to the ceremony, we meet Toby’s parents, who are concerned that Kate is just as bad and “unstable” a partner for their son as his ex-wife Josie was. But he stands firm that he’s getting married, and invites them to get on board or leave. They stay.

* Deja is at the wedding with Randall, Beth and the girls, but she’s angry about Shauna leaving and she’s acting out. A knowing conversation with Beth’s cool cousin Zoe, though, turns her attitude around for a while… until Toby’s mom mistakenly thinks Deja is one of Randall’s birth daughters, which sends the teen into a fury. She winds up taking a baseball bat to the windshield of Randall’s car. (And if you’re wondering why Zoe is at Toby and Kate’s wedding, she’s photographing it.) At the reception, we see Zoe and Kevin having their first conversation.

Read on for Berger’s take on the season-ender, then make sure to grade the episode via the poll at the bottom of this post.

TVLINE | OK, Let me make sure I have this right. There are various time-jumps at the end of the episode, is that correct?
Yes.

TVLINE | And aside from the Randall-Tess one, can we infer that what we see is happening around the same time in the future?
Yes. Most of the other ones are going to be stuff that we’re going to be doing in our third season.

TVLINE | When Randall tells adult Tess, “It’s time to go see her,” it opens up a whole world of possibilities. Will this be a throughline in the next season? Or maybe just something that gets revisited from time to time?
It’s going to be a time period that we are visiting throughout our third season and moving forward even past that. It won’t necessarily be week-to-week, but it will definitely be something that we’re checking in on regularly.

TVLINE | The mood while they’re talking seems rather somber, and Randall seems a bit upset. Can you weigh in on whether that’s an accurate reading of the emotional temperature of the room?
[Laughs] It definitely seems that they’ve found themselves in an emotionally loaded situation. That is accurate.

TVLINE | Geeky question: Is that a computer in front of Tess? It seems very futuristic, but then again, tech moves very quickly.
[Laughs] Yeah. That is our rendering of a gentle version of the future. We didn’t want it to be so distracting that it takes you out of it, but we did want to show that some time has passed. 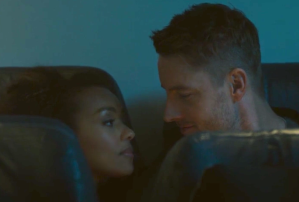 TVLINE | And then we see Kevin and Zoe — it looks like he might be heading to Vietnam to explore Jack’s past a bit. Can you speak a bit to that?
Obviously there’s a lot about Jack that we as viewers still don’t know and whose children and family still don’t know, so one of the things that we really want to be exploring in our third season are those chapters and those pieces of Jack’s life that we don’t yet know anything about. And I think it’s going to be really exciting for our characters and his son to figure all that out along with the audience.

TVLINE | I imagine Jack’s brother Nicky will be involved.
That is a safe assumption. [Laughs]

TVLINE | Kevin and Zoe were looking affectionate on the plane. What might we infer about Sophie from that?
We are really excited for Kevin to start this new chapter, and it doesn’t mean that we’ve heard the last of Sophie forever. But definitely when we come back, he’s going to be embarking on something new.

TVLINE | Does that mean that Alexandra Breckinridge is not a series regular in Season 3?
The plan right now is to come back and start this new chapter.

TVLINE | Kevin seems in a better place, emotionally, after being run through the gamut this season. Can you talk to me about where he’s at, and whether he’s ready for a new romance?
For sure. Obviously, he’s been through so much. And he did have to hit rock bottom to get to a healthier place, but I think yeah, he’s in a healthier place than he’s been in a really long time. At the end of the finale when he talks about taking that breath, he — along with the rest of his family — really has done it. And it’s as good of a time as any to really embark on something new. 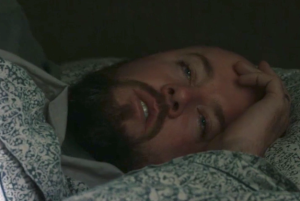 TVLINE | I loved seeing Wendie Malick and Dan Lauria as Toby’s parents. We haven’t seen much of Toby’s family this far; might we meet more of them in the coming season?
Definitely. And with Dan and Wendie, they were so fantastic, we’d be thrilled to have them back. And for us, it rounded out Toby in a way we hadn’t previously seen before and felt really exciting. So we’d love, moving forward, to get to know him even better through other members of his family.

TVLINE | Talk to me about wanting to include the vow renewal in this episode and wanting to show Jack as he might have aged if he’d lived.
It was always a priority to us to figure out, “How do we include Jack in this monumental day?” [of] Kate’s wedding. She’s so connected to her father and if ever she’d been feeling strongly linked to him, it would be around a wedding, when so many emotions come up. It felt really realistic to us that she’d be dreaming about him while she was wishing that she was there. It just felt like a very organic way to include him. And then even for us, when [Milo Ventimiglia] stepped on set, it was so surprisingly emotional to see him that age and also to see the way Rebecca reacted to him. It took all of our breaths away in a way that we didn’t expect. It was so moving, and their performances were so beautiful. It was so exciting for us to get to use him in that way.

It was so interesting, to see [Mandy Moore] in those vow-renewal scenes, the way her body language changed and her face changed. You really felt like you were watching an entirely different woman than the woman we know, usually, in that time period. I thought it was just brilliant.

TVLINE | Please update us on the possibility that Deja will stay with Beth, Randall and the girls, now that Shauna has terminated her parental rights.
When we come back, we can expect that Deja is going to be with the Pearsons for the immediate future. Obviously, Shauna and Deja have such a strong bond that we probably have not heard the last from her. She seems so linked to her daughter. I think there are still future chapters to play there. But in the immediate future, she’s going to be with Beth and Randall.

TVLINE | Is there anything that you really wanted in the wedding episode that didn’t make it in?
Ooh, interesting. One of the things that we chose to do in editing, which was a surprise to us, was not show Kate spreading the ashes. It was something that we always thought we’d include, but when we got into the edit bay, we realized that it was more powerful offscreen to us, that it was the journey of getting to that emotional place that we cared about more than seeing the physical act of doing it. So that was an instance where we imagined it one way and you get in there and you decide, “I think it’s better this way.”

TVLINE | I was wondering: Did she spread all the ashes? Did she save any?
In our minds, she did. She felt like it was time.