Warning: This post contains spoilers for This Is Us‘ Season 3 premiere.

KIDDING. You didn’t really think that This Is Us, the show that spent two seasons making us clamor to watch a guy who’d already died die, was going to give up the goods so easily, did you?

Instead, the NBC drama’s Season 3 premiere Tuesday picked up with The Big 3’s birthday, which was filled with celebrations (thanks, Madison!) and disappointments (Deja’s breaking her foster dad’s heart) marking Kevin, Randall and Kate’s 38th trip around the sun.

Read on for the highlights of “Nine Bucks.”

‘HER’ STORY | We do get a little bit of a glimpse into the show’s new mystery. In the future, Randall and Tess go to see “her,” and Randall calls Bearded Toby asking him if he wants to come down, because “She’ll want to see you.” Hmmm… 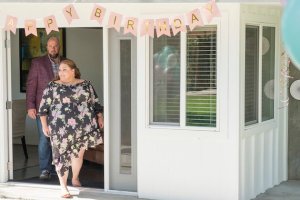 BABY BLUES | Kate and Toby start trying for another kid on their wedding night, but it’s a no-go for quite some time. “So the pregnancy was a fluke?” she asks her doctor, but the very reassuring OB-GYN diagnoses Kate with polycystic ovary syndrome and asks Toby to undergo some testing.

Turns out, Toby has a decreased sperm count, possibly from extended use of antidepressants. On Kate’s birthday, they visit a fertility specialist who gives them some bad news: “At your weight, the chances of a successful pregnancy are very slim.” Kate maintains that they know all the risks, but “We want to take our chances.” But the doctor refuses to help, citing liability issues, “and I think you’ll be hard-pressed to find anyone who will.”

Kate fights tears as they leave, but she rallies to head to a birthday brunch Madison has organized. And she holds it together until it’s time to blow out the candles, when she says that her wish is for a baby, but she knows it’s not going to come true. “It’s like this black cloud follows me around. Every time I get away from it, it catches up to me,” she tells her friends as they watch, silent. “When is the universe going to give me a damn break?”

Back at home, Toby reminds Kate that “there are other ways to have children” and they admit that they’d both had mixed feelings about the cost and danger involved in in-vitro fertilization. He offers to pull back on his antidepressants in order to get his sperm count back up, but she vetoes that, hard.

But the fertility doc has regrets about making Kate and Toby feel bad, so she calls them back to say that she will help them — even though IVF in their case has about a 90 percent failure rate — and take them on as patients. Kate tears up and runs around the desk to hug the doc, thanking her. Back at home, Toby flushes his meds. (Noooooooo!) 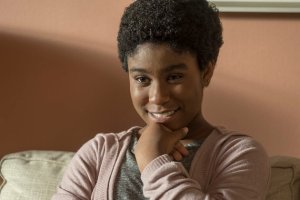 WANNA MAKE IT OFFICIAL? | Randall and Beth discover Deja’s smash-up job just after she does it. We see her running with Randall, undergoing therapy, and sitting in a judge’s office as Shauna gives up her parental rights. The judge wonders whether Deja’s father is going to be OK with that. “He’s not gonna object,” Shauna says, as Randall and Beth look on. “He made it clear he wants no part.”

Kevin gets an apartment in New York City, an event he celebrates by sending Zoe a text that says, “I’m officially bi… coastal.” They’re totally together now, but keeping it a secret from everyone, especially Beth. That’s tough, given that Zoe is staying with Randall, Beth and the girls while she’s working on a documentary. She thinks she’s keeping their relationship a secret, but the way that Zoe freaks out when she learns that Kevin is coming over for birthday dinner makes her cousin insanely suspicious. (Side note: Did you hear about Zoe’s big episode?)

“Your brother and my cousin are knocking boots,” Beth says to Randall, who reminds her that they have no proof and who forbids her from going postal by making her swear on Oprah. “Fine,” she says reluctantly, “I will swear on Oprah.” 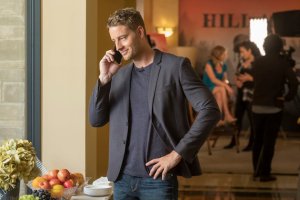 But the minute she sees them together, she forgets about her promise to Randall and Ms. Winfrey. “You two are knocking boots,” she declares. While the cousins argue loudly downstairs, Kevin sits with his nieces and muses about how he’s probably not dating Zoe, because they haven’t talked about anything of substance… yet he dated Jennifer Love-Hewitt for a while, and they didn’t talk about anything important, either. Just then, Beth yells at Zoe, “Do you know that he dated the woman from Party of Five?!” Beth yells. (Ha!) “I love Neve Campbell!” Zoe shoots back. (HA!)

Later, Beth gets Kevin alone and confesses that she loves him a lot — though she doesn’t say it often, because it ruins her shtick — and that she’s worried that Zoe “will break you.” She alludes to Zoe’s “complicated” background and warns him that her cousin eats men up and spits them out.

MAKING A CHOICE |Randall brings Deja to show her the apartment building they bought last year, and he tells her about how he found William there. “I found him, and then I lost him all over again. Then I bought his building. Guess you don’t have to drop a hundo an hour on a therapist to crack that case, huh?” He adds that being adopted has defined his life: “This big, giant thing happened to me, and I didn’t have any say in it.”

That’s when he tells Deja that he and Beth want to formally adopt her, but they don’t want it to happen if she doesn’t want it. She gently says that she and Randall aren’t the same; he had a loving family his whole life, but she has a dad who doesn’t want her and a mom who just signed away her rights. “Don’t tell me I have a choice in anything,” she says just before she asks him to take her home. 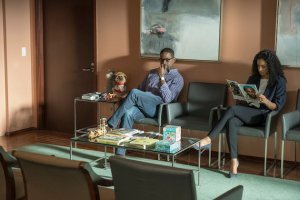 Back at the house, Randall apologizes for screwing up the adoption conversation and admits he’d had it planned for weeks. “It was lame of me to compare our situations, but it’s only because I really want all of this to work out,” he says, calling her “exceptional” and saying that he missed talking to her when she wasn’t around. “Sorry I screwed up your birthday, Randall,” she says, walking out of the kitchen.

That’s when Beth enters, sympathetic to Randall’s sadness but feeling she needs to tell him that “Zoe and Kevin are doin’ it.” And while they discuss, Deja sneaks out of her window and takes the bus to go visit her father, who works at a bike shop near her old apartment.

This Is Us Character Milestones We Want to See 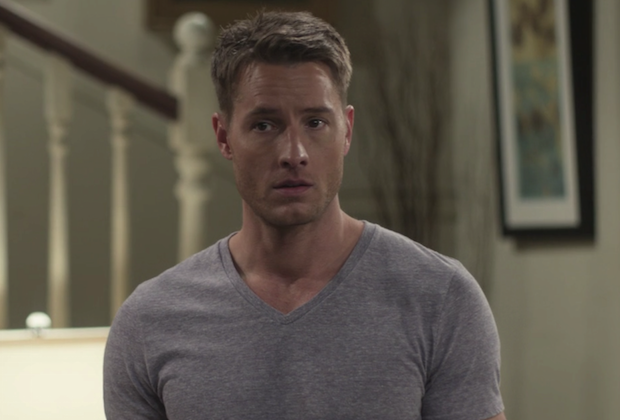 At the bike shop, Deja has a speech of her own that makes it clear how much she values the Pearsons and how much they love her. “I just came here to say, I’m gonna do something really great with my life, and you’re gonna miss it,” she says as he stands there, speechless. “My mom’s gonna miss it, too.” Then she adds that she’s got only one thing to ask him.

When she returns, she admits that she snuck out. Randall is all Stern Dad until she pulls a brightly wrapped present out of her backpack, which makes him melt like a Popsicle in July. And when he opens the box at dinner, it’s a gorgeous pair of Nikes. “Oh, and you can sign those papers if you want,” she says, which makes Randall and Beth beam. 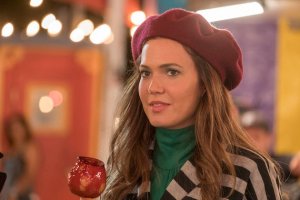 CARNIVAL PRIDE | At the open mic night, Rebecca sings “Moonshadow” and Jack watches, rapt. “Look at this guy, he’s done for,” two onlookers comment. From the stage, Rebecca smiles at her future husband. Afterward, they sit at a table and she talks a LOT about her nascent music career. He doesn’t seem to mind. “Please tell me something about you,” she says. “Well, my name’s Jack,” he responds. (Heh.) They decide to go somewhere else.

They wind up at a carnival, where Jack buys his date a candy apple and a hot chocolate, then they flirt their way through him wiping a piece of the sticky redness off her face. It’s cute. Rebecca is quite a chatty Cathy throughout the evening, but she pauses long enough for Jack to mention that he got back from Vietnam not that long ago (cue flashback to him cradling someone who’s bleeding, I’m guessing it’s his brother?) and that he was a mechanic. She asks if he has any siblings, and he mentions that his brother died in the war. It’s awkward for a minute, and then it starts raining and things get even more awkward.

Jack drives Rebecca home, and it seems like the entire evening might have been a total dud. But as she’s bidding him a formal and passionless goodnight, he admits that the weirdness began because he couldn’t afford an umbrella and games, and he wanted to be able to buy her a few turns at those crappy midway amusements if she wanted them. But he tells her she feels like home, “and I’ve never really felt that before.” Then he apologizes for their lousy date, and she agrees that it was bad. “But the way that you look at me…” And then she kisses him, right there in the car, before she slips out and says goodnight.

But when Jack goes to return the jacket Rebecca left in his car, he sees another man holding a bouquet and kissing her on her front steps. (For the record, Rebecca looks rather horrified before this happens.)