Not since Season 12’s “Guess Who’s Coming to Dinner” has Grey’s Anatomy dished out a meal as tense as the one in Thursday’s “The Last Supper.” Jackson and Maggie thought they’d be sitting down to a celebration of their parents’ anniversary — with Station 19’s Vic and Dean on hand as collateral damage — but as regular viewers could have predicted, the get-together turned out to be more of a coming-apart. Read on, and I’ll serve up the details, course by course. 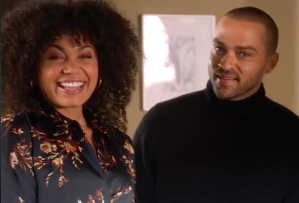 ‘YOU’RE CLEARLY IN THE MOOD TO CELEBRATE’ | As the episode began, Maggie ran into Jackson at Grey Sloan and snarkily related that Koracick had to think about whether or not to let her return to her old job. Nearby, Richard and Catherine bickered about whether they should still have the dinner. Catherine maintained that absolutely, they should; even though they were separating, they wanted the kids to know that they would still be a family. (This, despite the fact that the kids didn’t much want to be a family or even in the same hospital as each other.) That evening, Maggie was first to arrive for the “anniversary party” — and the first to notice the thickness of the tension in the mansion. Jackson showed up next with a gift that outshone his stepsister/ex-girlfriend’s. In no time, Catherine got the wine flowing — and not a moment too soon. Richard was anxious to break it to Jackson and Maggie that they were splitting up. Before he could, though, Vic arrived — with, to Jackson’s surprise, Dean. 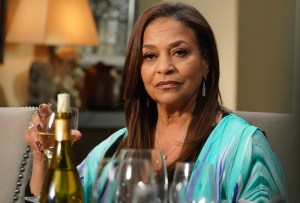 “Did you know they were bringing dates to dinner?” Catherine asked Richard privately. Of course he didn’t. Anyway, they obviously couldn’t break their news now. Adding place settings to the table, Maggie accused Jackson of being unable to be alone. He’d gone immediately from April to her, and even on his “nature walk,” he’d wound up meeting a woman named Kate. (Remember her?) Back in the living room, Dean fussed at Vic for not warning Maggie that he was coming. “Time to eat,” cried Catherine. Good God, someone hide the knives! After sharing that she’d made — made? Catherine Fox cooked? — shrimp scampi, she inquired whether Vic was allergic. Heavens no, said Dean. “She’ll put anything in her mouth.” Come again? “Anything that’s food,” he quickly clarified. And believe it or not, things got worse from there. Dean made the mistake of asking whether Richard and Catherine had been married when Jackson and Maggie got together — the gift that keeps on giving! 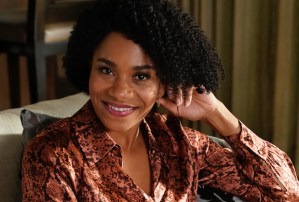 ‘WHEN I WAS IN TRAINING, THEY CALLED [PAC-NORTH] THE MORGUE’ | From there, topics included Maggie’s dislike of rich guys (at least those who aren’t down to earth), Richard’s job at Pac-North (aka the Morgue) and that “coffee” that Richard had had with his “friend.” Later, Maggie regaled the group with the story of Catherine’s very un-Catherine-like, super-romantic proposal to Richard. (Did I see the Webbers softening toward one another?) “You’ve had your ups and downs,” Jackson noted, making a toast to his mom and stepdad, “but you always push through.” They are, in his estimation, the gold standard of coupledom. Afterwards, Catherine stole a moment alone with Richard to suggest that Jackson was right, they did always persevere, so maybe they shouldn’t give up. (I had seen them softening! Just not enough… ) “Apologize,” Richard said. “If you love me and you want this to work, say you’re sorry that you didn’t stand by me as I had to leave [Grey Sloan] and rebuild my life.” In response, she said, “I am sorry, but… ” Which wasn’t what he wanted to hear. He didn’t think that apologies could include the word “but.” So “it’s too late,” he declared. (Such children — and they were only getting warmed up!)

Back at the table, Catherine lashed out at Richard, who was busy chuckling at texts that he was receiving. She assumed they were from the “Pac-North heifer” he was seeing. (That’s no way to talk about Jasmine Guy!) But they were actually from Alex, who’d just given Webber the go-ahead to make Maggie an offer to be Pac-North’s cardio chief. Was that what Catherine hadn’t wanted to discuss with Jackson? No, that, his mom said, was that she and Richard were splitting up. She just hadn’t intended for him and Maggie to find out at a potluck free-for-all. Ironically, it was when Vic walked in on Jackson comforting his mom afterwards that she at last gave his new girlfriend a chance — as well as a taste of her famous cobbler. Outside, Richard confided in Maggie that yes, he really did think it was over between him and Catherine. About that offer, though… she wanted to see it. “Alex thinks I’m worth this much?” she marveled. “Then I guess I’ve got a new job.” When she went back inside, she ran into Dean and somehow let him leave without saying, “You’re adorable. I should totally date you.” But at least Maggie apologized to Vic for taking out some of her unresolved anger on her. 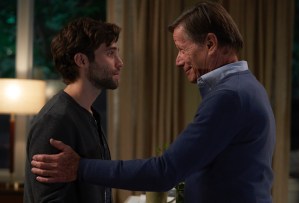 ‘EXCEPT FOR THE BALL GAG AND JOCKSTRAP, WE’RE GOOD’ | In the episode’s other plot, Levi, still recovering from his attack of heartbreak syndrome, learned from his mom that his ornery Uncle Saul was on his last legs. Since only Schmitt had ever really gotten along with the grump, off he and Nico went to pay him a visit at his nursing home. Once there, Levi found out that Uncle Saul was in end-stage heart failure. Like, really end-stage. No sooner had Schmitt revealed that Nico was his boyfriend than Uncle Saul croaked. “I killed him with my gayness,” gasped Levi. Owing to Jewish tradition — which Schmitt had gleaned from Google — he couldn’t leave his uncle’s body alone until another relative arrived to sit with it. Once Aunt Gertie showed up, Levi backed off from calling Nico his boyfriend and just introduced him as his friend. Since Aunt Gertie and Uncle Saul had agreed that the end was The End, she told his corpse, “Love ya, buddy,” and split. That night, Levi and Nico were still there, still waiting for a relative to spell them, when at last a man played by Peter Strauss came in and began weeping over Uncle Saul. The mystery man knew all about Levi… and, for that matter, his boyfriend. Of course Saul had known that Levi was gay. “Takes one to know one,” said the man, whose name was Daniel and who was the love of Saul’s life. Aww.

Later, Daniel revealed that he’d been trained in how to prepare Saul’s body and offered to teach Levi. In fact, “it would be an honor,” said the older man. During the process, Schmitt asked why Uncle Saul had been with Aunt Gertie instead of making a home with Daniel. It was different for Levi’s generation, Daniel explained. Uncle Saul was ashamed of himself. Maybe, Daniel theorized, Levi had been with Saul at the end so that he’d never again take for granted that “you have the freedom that he wouldn’t give himself.” As the episode drew to a close, Levi was back home and informing his mother that he was moving out. Her saying that she accepted him wasn’t the same thing as actually accepting and being proud of her “super gay” son. So he thanked her for the food and the laundry, and split. Finally, Catherine and Richard had one last spat, this time about him dragging Maggie’s career down along with his own. He could damn well hire her if he wanted, he said. “And there isn’t a thing you can do to stop me.” In response, she made a phone call to inquire about buying Pac-North. “This is absurd,” cried Richard. And petty as hell. “Maybe it’ll be a good investment,” said Catherine, “or maybe I’ll just shut it down.” Such children!

So, what did you think of “The Last Supper”? Catherine and Richard’s behavior? Catherine’s “revenge”? And how sweet and empowering was our Schmico subplot?!?