When everybody left Joe’s Bar in Station 19’s Season 3 premiere Thursday, they all had a pulse. But would they still have one by the conclusion of Grey’s Anatomy’s midseason premiere? That was the question as we headed into “Help Me Through the Night.” And the answer? Read on… 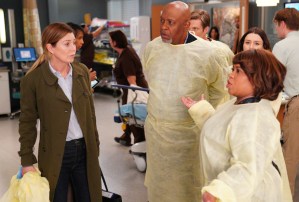 ‘JO STOLE A BABY’ | Early on in the episode, Meredith showed up at Jolex’s to tell Alex about his replacement, only to find Jo and Link preoccupied with the baby that she insisted she hadn’t abducted, she just hadn’t brought to Grey Sloan yet. When the doctors received texts about multiple incoming traumas, they all hightailed it to the hospital — even Jo. Though she’d had two glasses of wine and therefore couldn’t work, she was going to take Link’s advice and sneak the baby into the nursery. At Grey Sloan, Tom ordered DeLuca to babysit Elliot until his heart restarted — a d—k move, it seemed to Andrew. But really, Koracick just didn’t want him to have to see the condition his fellow residents were in post-Joe’s. (More of this Tom, please.)

Shortly after Mer arrived with Link and Jo, Richard and Owen showed up — Grey had called in reinforcements, to whom Bailey was quick to give privileges. (Very Wild West, isn’t it, the way chiefs are always giving doctors privileges? Like sheriffs deputizing townsfolk willy-nilly.) Taking Richard aside, Ben confided that he was concerned about Bailey operating on her residents when she’d yet to process her miscarriage; Warren wanted Webber to be with Miranda in the O.R. Nearby, Amelia and Teddy discovered that Casey had a temporal lobe contusion, which was why his PTSD had been exacerbated. While they were discovering this, Parker vanished into the hospital. 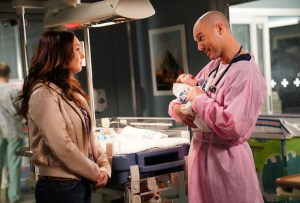 ‘I LOVE YOU, MEREDITH GREY’ | While Tom reverted to obnoxious form, questioning whether Jackson was up to the task of reconstructing Blake’s face, Koracick also hinted at his softer side, revealing that his protégé had a grandmother who was local and should be called. Off that scene, Teddy defended her ex to Owen, who suggested that she and Amelia look for Casey in whatever the hospital’s equivalent of a bomb shelter was. Amid all the hubbub, Cormac found Jo with the baby in the nursery, and not only gave the tot his wellness check, endeared himself by sensing her attachment to the infant. The father of two teenage “hellions” even admitted that, were he in Jo’s shoes, he might’ve stolen the baby. (Wait, is McWidow actually being positioned as a post-Alex love interest for Jo? Too soon, Grey’s. Much. Too. Soon.)

Before a delirious Taryn went into surgery, she blathered on about how Levi “got the love of my life fired, which is you,” she told Mer. “Surprise.” Helm would get over it, though, she was sure, if she ever met someone else. Just then, Schmitt collapsed. When he came to, suffering from symptoms of a heart attack, he told Grey that there was no one to call. His mother would just have a heart attack of her own, his estranged bestie was in surgery, and his boyfriend was operating on his bestie! Elsewhere, while working on Blake with Owen and Jackson, resident Hannah (who seemed to be getting more screentime in the wake of Dahlia’s firing, no?) marveled that Teddy could do a lot better than Tom. Er, what? Yeah, she didn’t realize that Altman was with Hunt. In turn, Jackson was taken aback to learn that the couple wasn’t engaged. “I figured [you were] ’cause you have two kids together, you live together, you marry everyone… ” Good one, Avery. 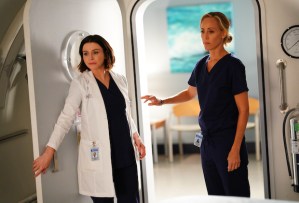 ‘LET’S GET THE SAW READY’ | When suddenly Taryn’s vitals plummeted during surgery, Bailey was called in with Richard hot on her heels. To save the patient’s life, they’d have to crack open her chest, a job that Bailey, shaken as she was, wisely handed off to Webber. Though it was touch-and-go for a minute — and Bailey freaked out, crying, “You’re gonna lose her!” — Richard stopped the bleeding, and Taryn pulled through. Afterwards, Webber updated Miranda on her residents, prompting her to reflect upon the fact that everyone she’d touched, or had someone touch, that day had lived. Yet she couldn’t save her daughter. “She just was, and now she isn’t,” she said, breaking down in Richard’s arms. (Chandra Wilson crushed the scene — and a lot of us with her, I suspect.) In another O.R., Jackson advised Owen that if Teddy is “somebody you feel like you wanna be with forever, that should include now.” In other words, shrug off the pressure of not ever having proposed and get it done!

Just as Avery and Hunt’s surgery on Simms was wrapping up, Owen noticed that the patient was, for lack of a better term, leaking brains. So Tom leapt in to keep his protégé’s head in his skull, as it were. Before locating Casey in the hyperbaric chamber, Teddy wondered aloud to Amelia whether Owen had been triggered by the mountain of obligations with which she’d arrived in Seattle. Sweetly, Amelia suggested that if he felt trapped, he would’ve already proposed; he was just trying to do things differently this time. Elsewhere, DeLuca was texting Mer to ask if they could talk later when Elliott’s heart regained its beat. Grey couldn’t reply, though, because she was checking out Schmitt with Teddy, who discovered that his general state of high anxiety had given him broken-heart syndrome, which presents like a heart attack but isn’t. At least Mer forgave him for ratting her out — one less thing for Levi to stress over.

‘MARRY ME, TEDDY’ | The following day, when Levi awakened, Nico was at his bedside, sweetly saying that his heart had been broken, too, when his boyfriend seemed to be in jeopardy. After a snuggle in Schmitt’s hospital bed, Nico took him to see Taryn, who forgave him for getting Mer in trouble. The residents all had a laugh about Helm’s confession to Grey, too. “She didn’t say it back, did she?” asked Taryn. Yeah, no. When Simms’ grandma arrived, Jackson and Owen were stunned to hear how “emotional” she thought “Dr. Tommy” was, and further stunned to learn that since Blake hadn’t wanted to leave her, Koracick had arranged for her to move along with him. But the biggest shock came when Tom sincerely thanked Owen for catching the brain leak and shook his nemesis’ hand. Off that twist, Hunt pulled Teddy into a nearby room and proposed. “There’s no perfect moment” to do this, he said, “and I am not a perfect man, but the one thing I know for sure is you’re the perfect woman for me.”

At first, Teddy hesitated for fear that Owen felt obligated and was repeating a pattern. But after he assured her that he was starting a new pattern — loving her and their family — she said yes with a kiss. Nearby, Amelia was just about to tell Link what she’d discovered during her ultrasound when Owen and Teddy came out with their joyful news. So instead, Amelia fibbed that what she’d wanted to tell Link was that they’re having a boy. Elated, he asked, “What do you think of the name Scout like Atticus and Scout?” At the same time, Richard and Mer approached Bailey with tissues, donuts and shoulders to cry on. Finally, Maggie was awakened from a nap on her sister’s couch by DeLuca, who wanted her to know that Elliott’s heart had restarted. He was just about to ask his ex’s advice on his situation with Mer when Maggie was served legal documents stating that she was being sued for the wrongful death of her cousin, Sabi. So I guess we won’t be getting Fun Maggie back anytime soon.

What did you think of the winter premiere? Alex’s continued absence? McWidow’s sweet side? “Dr. Tommy”? Owen’s proposal? Hit the comments after grading the episode below.