This Is Us‘ Kevin realized this week exactly how much he cared for his ex-wife, Sophie, just as it became nearly certain that they will never be together again. To invoke a movie often referenced in Tuesday’s episode: How do you like them apples?

The hour found Kevin returning to Pittsburgh to attend Sophie’s mother’s funeral. While there, he reminisced about several pivotal moments in their relationship, including the night Jack died. And later, in a surprising turn of events, Kev slept with Madison — yes, that Madison — once he returned to Los Angeles. (Read a full recap here.)

TVLine got Justin Hartley on the phone pronto to discuss Kevin’s heartache (that scene in the car!), his inevitable reaction to the unexpected hook-up (there’s no way this can end well, right?) and Hartley’s experience directing his co-stars in Kate’s upcoming part of the trilogy (which will air on Tuesday, Feb. 11).

TVLINE | In this episode, we get a lot more context for Kevin and Sophie’s relationship over the years. What was your take as you were reading these moments from their past in the script?
It’s interesting that what brought them back together is the funeral, right? That’s the very thing that may be the pivotal point in Kevin’s life. You learn it in this episode when he says, “This is where my childhood ended.” You learn that she was the one who was there with him when he got that news. And when she gets this news that her mother passes away, one of the first things she does is she calls him. There’s a lot of weight to that. They have a connection. It’s special. These are two people that are forever connected. It’s his ex-wife, you know? They’re different people now, too. Especially him. He’s finally found himself, and he’s comfortable in his own skin. It’s that heartbreak — he said it at the gravesite… He said, “The sad part is that I’m finally ready”…. He’s sitting there with this woman, an arm’s length away from her. It’s all he wants, and he can’t have it. It’s so sad, isn’t it?

TVLINE | It is. And it read to me as it’s not just him feeling that. She’s giving it back to him, too.
Totally. But I also think that he’s, in a way — in every way, actually — being a man and being there for her. The suffering that’s going on in him is taxing and it’s hard, because he’s not going to be able to get what he wants. But he knows that and he’s willing to suffer through that to be there for her. He’s [got] tunnel vision. He’s like, “I’m going to be there for her, always. I will never not be there for her,” and suffering through all of that, the idea of her walking back in there and going back to her fiancé, which is what she should do, because [Kevin] hasn’t been the greatest to her. [Exhales] It’s an interesting thing. I thought that was so great. He’s putting himself second and putting her first. It’s what you should do, right? If he would’ve been able to do that earlier, maybe the outcome would’ve been different. But it’s sad.

TVLINE | Sidebar: Interviewing your cast is always amazing, because anything past the immediate episode is full of “Could be! I don’t know! We’ll see what happens!”
Listen, lemme just tell you. Let me apologize for all of us. We’re the worst f—king interviews ever, because we cannot tell you s—t. [Laughs] There’s a mandate. But [you’re] on the phone, asking really great questions, obviously did [your] homework, really invested and these questions are great, and we literally can’t give you anything. We’re the dud interview people.

TVLINE | First of all, you’ve clearly never read a dud interview. This is not one of them.
[Laughs]

TVLINE | And second, if you were trying to butter me up, it worked. Now you can skate through the rest of this interview.
Challenged accepted! [Laughs]

TVLINE | Let’s talk about how Kevin sleeps with Madison, who is the second friend of Kate’s he’s moved in on.
Wait, is that true? What do you mean? Who was the first one?

TVLINE | Sophie was Kate’s friend first, right?
Oh yeah. Yeah, you’re right. Look, here’s the deal. For the first one, he was smitten. They were little kids, and then it turned into something more. But this one, yeah, this one’s a little bit… That’s kind of a forbidden fruit thing, right? You don’t sleep with your sister’s best friend. You can’t do that!

TVLINE | Especially when you’ve always kind of been annoyed by her. I’ve never gotten the sense there was a close bond between Madison and Kevin.
They’re mutually annoyed with each other. She thinks he’s ridiculous. Hey, look: Things change. [Laughs]

TVLINE | We don’t see what the vibe between them is like afterwards. Give me a sense of it, because he’s clearly feeling awkward when he’s whispering on the phone with Randall.
Oh, totally — and guilt. She’s not chopped liver. It’s nothing like that. But he understands what that is. That’s his sister’s [friend]. He shouldn’t have done that. That’s his sister’s best friend. Have a little more self-control. But at the same time, they’re both single. It was kind of the perfect storm: We’re both adults, we’re both single, whatever. Then he’s like, “Oh God, my sister, oh God.” I will tell you: It’s a couple episodes in the future, but it does get addressed between Madison and Kevin. It’s hilarious. It’s out of control hilarious. [Laughs]

TVLINE | Isaac Aptaker and Elizabeth Berger said last week that The Big Three’s trip to the cabin would be hard, because none of them are at their best, yet they’re having to step up and be there for each other.
We finish out the trilogy with Kate. There’s definitely some back story there. You start to see her relationship with her boyfriend and what all that means and how that influenced and affected who she is now and all of that stuff. That’s really great. The cabin stuff, it is interesting. Trying to be there for other people when you’re going through a lot of stuff is difficult. But they’re all connected. They’re family. And some s—t comes out. There’s a minor blow-up. Different ways of handling important situations. The fact that Kevin — should I be saying this? I shouldn’t be saying this — there’s a problem between Kevin and Randall.

TVLINE | We knew that was going to start at some point.
Yeah. It has to do with the way people handle certain things, and it becomes a dealbreaker situation. It’s massive. There’s two sides to the story and they both have their points, and I get both sides. But when I step into Kevin’s shoes, obviously, I only get one side of it. 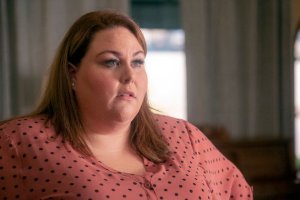 TVLINE | You directed next week’s episode, which is Kate’s part of the trilogy and Chrissy Metz’s showcase. Tell me how that compared to the episode of Smallville you directed in 2011.
Less greenscreen. [Laughs] They were both great. Smallville was an iconic show that went on for 10 years, and I was really lucky to be able to direct that show. That was an incredible time in my life. I poured everything I had into that. As you get older and you gain more experience, with that experience comes more knowledge and with that knowledge hopefully comes more being able to execute certain things and give notes in a certain way. Hopefully, I’m better now than I was back then. We have the best actors in the planet on our show, so it’s a gift to be able to “direct” these people. I said to them, “I’m not directing as much as I giving little nuggets of inspiration while you guys are acting and doing the amazing things you’re doing,” and hopefully that comes across in the performance a little bit. They bring it every week. There’s not one moment of one scene that goes by where you’re like, “Eh, they weren’t really there for that performance.” It’s incredible. They’re great. So it’s easy in that regard.

TVLINE | I know you and Chrissy are tight. Did you have conversations about what was going to happen during filming?
A ton. And that’s part of the thing, too: understanding that I’m not the person… that comes in and assumes that after 80 episodes of playing this character that I’m going to change… it’s annoying. But what I can do is read the script 900 million times, and I can give an idea or a story about something that happened to me one time that reminds me of what’s happening here, how it was different or whatever. And then you just watch that actor process that information and then use the tools and their skills to bring all of that to life. It’s really incredible to watch. Mandy was phenomenal in this episode, as well. When you see the dynamic between the two of them in that episode, oh my gosh. I’m not sure they’ve ever really done that with them.