By this point, we’ve all been watching This Is Us long enough to guess that the woman in the bed next to Kevin probably wouldn’t be the most obvious choice, aka his grieving ex-wife Sophie.

But wow: Who actually turned out to be snoozing underneath those sheets at the end of the previous episode was rather unexpected.

We learn in this week’s hour that Kevin and Madison — aka Kate’s overeaters group nemesis-turned-best friend — bumped uglies just before Randall called for help. Immediately, I envision a future where she gets knocked up, he proposes out of some impulsively chivalrous nonsense, and Mads herself is the pregnant fiancée he brings to the cabin in that 40th birthday flash-forward.

But I’m getting way ahead of the timeline here. The bulk of this week’s tender episode deals with how Kevin is finally able to be there for Sophie during a difficult time, and how their relationship developed over the years.

Read on for the highlights of “A Hell of a Week: Part Two.” (And make sure to read what Justin Hartley has to say about this episode and the next.) 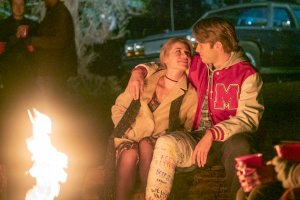 HOW DO YOU LIKE THEM APPLES? | This week’s flashbacks hop around a lot, but most of them revolve around Kevin and Sophie on the night Jack died (they left the party in the woods, got donuts, went to see Good Will Hunting but the film broke before they could watch the ending, returned to the party and fell asleep in the car but woke up when a devastated Kate came to deliver the awful news) and during their visit from New York for Rebecca’s birthday.

In the latter scenario, Kevin is let down that Rebecca didn’t watch his first TV job, in which he played a leukemia patient on Days of Our Lives. She’s confused: Didn’t he tell her that his line got cut? It did, he confirms, but he was still on camera. She apologizes profusely but is a little distracted as she prepares to leave for work. Kev and Sophie then go to see her mom, Claire (hi, Younger‘s Jennifer Westfeldt!), who definitely saw Kevin’s small-screen debut and lavishes him with praise about it.

Claire pours them all a celebratory “Fresecco” — Fresca and prosecco —  then announces that she’s bought tickets for her and Sophie to go see the aurora borealis. Claire is excited; Sophie is extremely not. The money Claire spent on the trip was supposed to go toward fixing the house’s pipes, her daughter points out, and it took two years for them to save it. Sophie leaves in a huff, and Claire pours some more bubbly for her and her son-in-law.

Kevin sees an opportunity to ask Claire for Sophie’s grandmother’s emerald ring, which he’d like to give his new wife. Claire tells him a story about how her father carried the bauble through the Korean war and then married her mother when they got back, then she gently says no dice. “I love you, kiddo, but I can’t give you that ring. Not yet,” she says. “Your marriage is too new, and you’re too young. You’ve gotta earn it, baby doll.”

Later that night, Kevin and Sophie return to Rebecca’s, where an agitated Mama Pearson informs them that her birthday dinner is cancelled. She and Kate fought, then Kate left for the cabin with Marc. But now, “I think she’s in trouble,” Rebecca says, panicking a bit. “We have to go get her.”

KEV IN THE CLUTCH | In the present, Kevin wraps his reshoots on the movie — and might I add, M. Night Shyamalan seems like a very patient director, based on his handling of Kevin’s nattering about endings and resolution — then finally gets in touch with Sophie. She’s been calling all night. “It’s weird that I called, right?” she says after telling him about her mother’s death. He assures her that he’s there for her. She tearfully lets him know she’s still with her fiancé, Grant, but his parents are still alive and he doesn’t really get it. 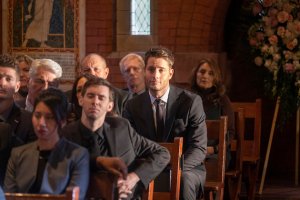 Kevin immediately hops a plane to Pittsburgh to attend the funeral. Sophie doesn’t see him until she’s about to fall apart while making some remarks about her impetuous mom; when her eyes light on him in the audience, it bolsters her. Still, he sees her with Grant immediately after the service and gets thrown, to the point that he’s on the fence about whether or not to show up to the gathering afterward. So he phones her from the lawn outside and watches her through the front window as she fields his call. She says she wants to see him, so she comes outside with her coat and asks, “Get me outta here?” 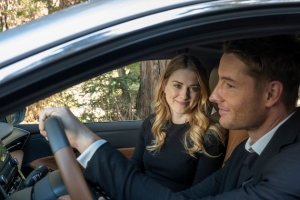 THE RIGHT, HARD CHOICE | Kevin drives aimlessly while Sophie muses about how Grant didn’t really know her mom. “It’s crazy I’m going to spend the rest of my life with someone who never really knew her,” she says. Kevin points out that grief is weird, and “Sometimes, you’ve gotta grab on to whatever’s around you just to survive.” Plus, he notes, she helped him through his father’s funeral, too.

We learn that way back, they vowed never to watch the end of Good Will Hunting. So now they pull it up on one of their phones and watch it in the car. “That was better than I could have possibly imagined,” Sophie says. They look at each other and there’s SO MUCH that’s going back and forth between them — and longing is a not-small part of it — but then she whispers that it’s time for her to go home. A teary Kevin says OK. 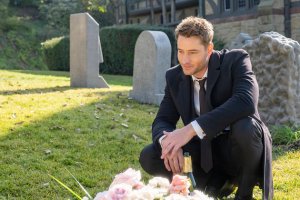 Kev finishes his afternoon by bringing Fresecco to Claire’s gravesite and chatting with her for a while. “I never earned that ring. Gosh, I wish I had another crack at it,” he says. “It’s too late.” Then he puts his first headshot, which he’d autographed for her at the start of his career and which Sophie had found among her mother’s belongings, in front of the stone. In my notes, I write, “Which is weird.” And a moment later, Kev walks back into the frame and picks up the picture. “I’m not doing that. Super weird,” he mutters. Ha!

Much later, Sophie is going through her mom’s things and finds the emerald ring.

The next time we see them is when Randall calls, crying; Kevin creeps out of bed without waking her. He suggests a little getaway to help them clear their heads: When he patches Kate in, she says “I’m about two seconds away from my marriage completely imploding” — she and Jack are at that retreat she mentioned a while back, but Toby is not — so that seals it: “The Sad Three” are going on a trip!