Two of the architects of Randall’s really terrible week say that his siblings won’t have it much easier when This Is Us returns with the rest of its Big Three trilogy.

Kevin’s episode, which is titled “Hell of a Week: Part Two” and which airs Tuesday (9/8c), will follow the other Pearson brother as he travels to his hometown and re-enters his ex-wife’s orbit. But is a grieving Sophie the woman we see in bed with Kev when Randall calls in this week’s hour?

“The next episode in the trilogy is Kevin’s story, so all will be revealed there,” co-showrunner Isaac Aptaker cagily told reporters ahead of this week’s installment. “We’re going to follow him to Pittsburgh and see why he decided to go to Sophie’s [mom’s] funeral, if he has any interaction with Sophie, what it’s like for Kevin to be back home again on his old stomping grounds.”

Speaking of Randall, Tuesday’s episode ended with Kevin talking his brother down after a confluence of events sent Randall’s anxiety spinning out of control. (Read a full recap and hear what Sterling K. Brown had to say about the hour.) But thanks to a flash-forward, we know that the pair’s closeness will be in short supply by the time the Pearson kids’ birthdays roll around at the start of Season 5. The rift between the two men is on the horizon and getting closer, Aptaker previewed: “Something big is coming in this next run before the end of our season that will tear these two apart.”

But what’s up with young adult Kate and her bad boyfriend? How does Sophia Bush’s Lizzy play into all of this? And why is Randall so dead-set against going to therapy? Read on for Aptaker and co-showrunner Elizabeth Berger‘s thoughts on…

RANDALL’S RESISTANCE TO HELP | Randall has kept his emotions at bay by talking to Kevin and Beth and going on long, punishing runs. But “At a certain point, you’re going to come up against something that none of those coping mechanisms are enough, and you’re going to have to dig a little deeper,” Berger said. “I think it’s clear that we’re reaching that point with Randall.”

KATE’S BREAKING POINT WITH MARC | A flashback in Tuesday’s episode showed the Pearsons in crisis mode about something having to do with Kate, though the exact nature of what went down was unclear. Expect to learn a lot more during Chrissy Metz’s showcase hour, Berger teased. “I think people can tell by now that Marc is not the greatest guy and probably is not the guy that Kate should be with. We are definitely going to see things start to come to a head in that relationship in a way where potentially the family is going to really have to rally behind Kate and step in and say, ‘Perhaps this is not the guy you belong with.'” 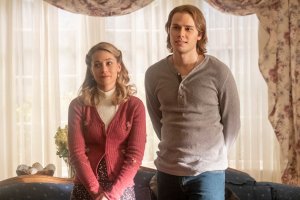 THE KEVIN-AND-SOPHIE STORY | Berger called Justin Hartley’s big ep “a really beautiful deep dive into Kevin’s past with Sophie. Tonally, this one will have a bit more of a nostalgic note that we’re really excited to share with people.” She also hinted that we’ll see different aspects of the high school sweethearts’ love story “that maybe we haven’t gotten from them just yet.”

LIZZY’S WHEREABOUTS | Aptaker and Berger would not confirm or deny that Sophia Bush’s Lizzy — whom Kevin met, courted and got left by in the previous episode — will return in Kev’s hour. “We’re huge Sophia Bush fans,” Aptaker said, “and read into that as you will.”