Viewers of Tuesday’s This Is Us might’ve seen the exact moment that Randall’s lifetime struggle with asking for help with his anxiety began. (And wasn’t it somehow more heartbreaking that he was wearing footie pajamas at the time?)

“Hell of a Week: Part One” followed Sterling K. Brown‘s character in the aftermath of his home invasion, when Randall fought to keep his mental health in balance. (It didn’t go so well — read our recap and a preview with the series’ co-showrunners.) Flashbacks to his childhood showed a toddler Randall who was scared of the dark during his first night in a twin bed… and whom Jack eventually told to “be brave” and tough it out, because he needed him to be the easiest of The Big Three to parent.

As the episode depicted, Jack’s seemingly harmless comment laid the groundwork for a lifetime of Randall’s feeling like he shouldn’t bother others with his inner torment. As Kate and Kevin’s brother grew up, Brown explains, he just got really good at thinking he was on top of things.

“I think it comes from his perception of his own intelligence, really,” the actor tells TVLine. “He’s like, ‘I’m capable of figuring out what’s wrong with me. I’m an intelligent man. I’m very facile at most things that I attack in life once I put my mind to it. I know how to fix whatever problem there is.'”

He adds that, aside from leaning on Beth, “The idea of putting that level of faith into someone else who he doesn’t consider to be, or who may not be, as intelligent as he sees himself? He’s like, ‘Why would I do that?'”

Read on as Brown — who also can be heard as the voice of Lio in Netflix’s Kipo and the Age of Wonderbeasts — breaks down Randall’s breakdown, as well as a big Big Three event we’ll see before the season’s end.

TVLNE | It was funny, in a weird gallows-humor way, that when Darnell comes over and suggests therapy for Randall, Randall literally runs away from him.
[Laughs] Totally. 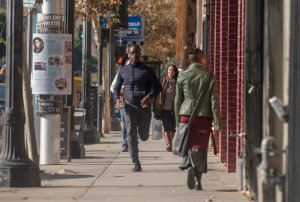 TVLINE | And on that run, when he sees the man bothering the woman in the parking lot, Randall uses physical violence — which is not the way we usually see him respond to things. Do you think any part of that was him subconsciously trying to avoid that tough talk with Beth by blowing up the day?
That’s a possibility. For me, in my mind and talking to [series creator] Dan [Fogelman] about it, and when you see Randall in the past, there’s just a baseline level of fear that he walks around with that’s a bit more heightened and explored than your average human being.

I think recently, after the break-in and feeling violated and then seeing someone else be violated and feeling like “I have some agency, and I can’t walk around afraid anymore,” it just kind of of poured out of him. Like, “Whatever fear that there is inside of me right now, I’m taking all of it out on this human being,” because he probably didn’t need to hit him as many times as he did. [Randall] got him off of her. The guy didn’t have a weapon or whatnot. The woman could have gone on about her business. But [Randall] had something that he wanted to let out, that has been there since childhood.

TVLINE | Awesome. We see him call Kevin very upset. We’ve seen Kevin come to his aid in the past in a similar situation more than once.
Yeah. 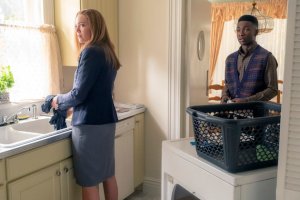 TVLINE | It’s so interesting to me that as we watch the kids grow up, Kevin and Randall are so often antagonists, yet Kevin is the one he calls when he is in crisis. Have you and Justin Hartley — or you and Dan Fogelman — had any conversations about why that might be?
You know, it’s interesting. Kevin is a natural-born caretaker. We’ve seen instances in the past where he takes care of his sister, where he gives a guy Halloween candy so that you know he’ll hold her hand or whatnot. He’ll come to the school when Randall’s having a bit of a panic attack and just sign the note or whatever.

He’s a natural caretaker. We see that in the present with him and Uncle Nicky and with [Cassidy] in the first eight episodes. He wants to be of service to other people. He’s also a bit of a dick, right? [Laughs] Like in the past, when he does the rap songs…he’s like, “Randall, let’s hear your rap song,” knowing that Randall has no idea what that song is… He has both of those things in him, because he’s just sweet and salty. [Laughs] That’s just the nature of who Kev is… But there’s no question of when things are hard, for some reason or another, I know that Kev is going to have my back.

TVLINE | We leave Randall in a rough place at the end of the episode. What can you tease about what’s ahead for him in the next few episodes?
The next two episodes will obviously focus on Kevin and then Kate. I can tell you that ultimately they will wind up taking a trip together to the cabin… They’ll be in the cabin, and the flashback storyline will echo a trip to the cabin, as well.