Now that they have wrapped their fall runs, TVLine is looking at how each network’s shows are stacking up thus far for the 2019-20 TV season — ending our weeklong review with NBC.

Listed below is the average DEMO RATING for each NBC series — and this year we are comparing Live+7 numbers (that include the first week of DVR playback, since the networks, at least, do take that metric into consideration at renew/cancel time). Beside that is the percent CHANGE versus each program’s previous, full-season L+7 average (or its time slot predecessor’s performance, if designated as such in NOTES). Each program’s RANK represents what is perhaps the most critical measure — how it is faring compared to other shows on NBC, since come springtime heads must roll to make room for shiny-and-new pilots.

THE TVLINE BOTTOM LINE: Yes, primetime’s top-rated/most watched program and the No. 1 drama continue to be feathers in the Peacock network’s cap, but it must be noted what a robust performer the #OneChicago trifecta continues to be, now in its second season united on Wednesdays. The Voice is still solid but slipping at a sharper rate, while the end of both The Good Place and Will & Grace — though neither a barnburner in the ratings department — points to a looming sitcom problem/Thursday overhaul. Was Bluff City Law a bad choice to bump Manifest this fall? Yes. Might NBC take a second look at the law drama’s final, remarkably steady stretch of ratings and attempt a “relaunch”? The official verdict is not yet in. 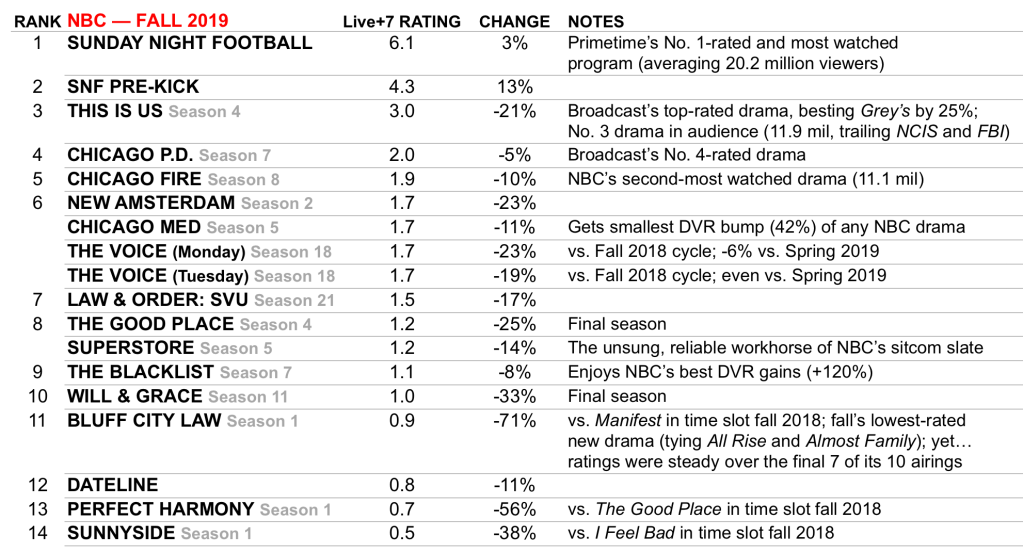 Which ranking or change most surprises you? (Review the midseason report cards for ABC, CBS, Fox and The CW.)