Sam Heughan’s Jamie has made a new friend in these exclusive new Outlander photos, but somehow, we dinna think you’ll mind that he’s getting cozy with someone who’s not Claire.

That’s because LOOK AT THAT CUTE LITTLE KITTEN IN JAMIE’S HANDS! Sassenachs and gentlemen, may we introduce you to Adso, the cat?

The “wee cheetie,” as Jamie calls him, makes his first appearance in The Fiery Cross, the Diana Gabaldon novel on which Season 5 of the Starz drama is based. In the book, Jamie gifts his wife with the cat. “He’ll keep the vermin from your surgery,” he tells her, but Claire is dubious. “Well, possibly very small vermin,” she replies. “I think a large cockroach could carry him — is it a him? — off to its lair, let alone a mouse.”

Readers of Gabaldon’s literary series know that Adso becomes a constant presence in the big house on Fraser’s Ridge. The forthcoming season will chronicle Jamie and Claire’s efforts to build a neighborhood around their expanded North Carolina homestead.

Season 4 ended with Roger returning to Brianna after a prolonged absence (during which she gave birth to their son) and Jamie getting orders from the British to hunt down his rebel godfather, Murtagh (who’d managed to hook up with Jamie’s Aunt Jocasta before he went on the lam). The photo at the top of the post seems to depict Himself and Herself deep in some militia-related business: That’s gotta be while Claire is packing ye olde heat, right?

Outlander returns on Sunday, Feb. 16. Check out the photos above and below, then hit the comments: Is Adso incredibly cute or ridiculously cute? 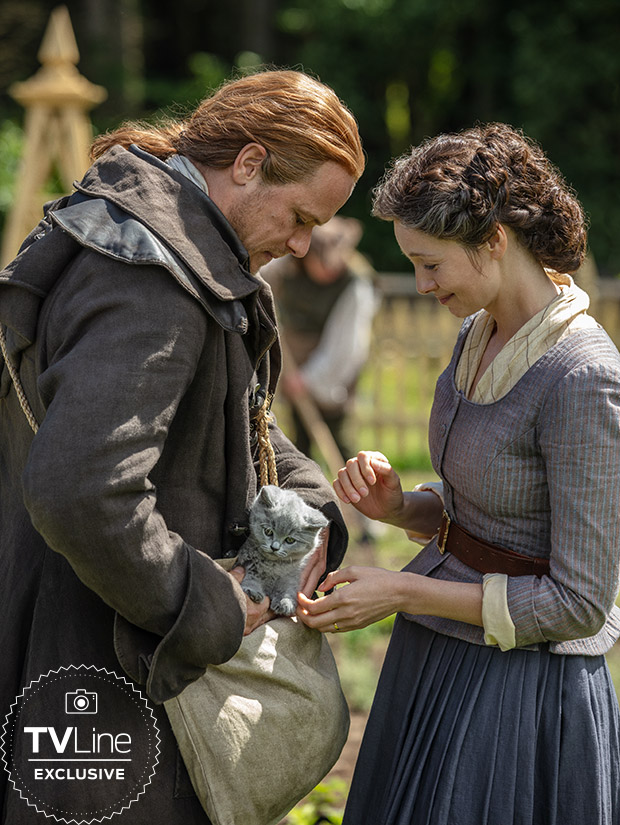